Air Berlin jet skids off runway in Germany, passengers unhurt | Germany| News and in-depth reporting from Berlin and beyond | DW | 03.01.2010

An Air Berlin plane with 165 passengers and six crew members headed to Spain's Canary Islands slipped off the runway at Dortmund airport in western Germany on Sunday. Officials say no one was injured. 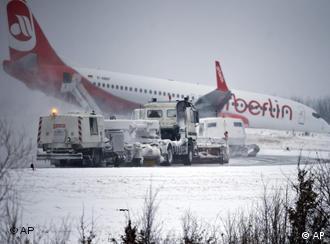 A spokeswoman for the low-budget German airline said the Boeing 737-800 slid off the runaway at the Dortmund airport after the pilot detected "technical irregularities" and aborted takeoff.

"A combination of the snowy weather and the speed the plane was travelling at forced the plane to skid off the runway," Dana Dadelow said, adding that there had been "no need for an emergency evacuation and no injuries."

The incident came after a night of heavy snow and freezing rain throughout central Germany, making travel hazardous.

Dadelow said the pilot acted according to procedure.

"The question remains, however, whether the surface of the runway was completely de-iced," she said.

A spokesman for the Dortmund airport said that following the incident, the runway had been closed until further notice and passengers sent to other airports.

Calls are mounting to introduce full-body scanners at airports. Germany's interior minster says he is in favor of the idea, but he has called for better technology to be implemented. (30.12.2009)

Two of Germany's three largest airlines are solidifying their partnership and consolidating resources. TUI has announced plans to buy a share in Air Berlin worth over 30 million euros. (08.10.2009)