Trucks carrying medicine, vaccines and baby milk have entered Daraya for the first time in years, the Red Cross said. Moscow announced a truce for the city, but now rebels have called for a month-long Ramadan ceasefire. 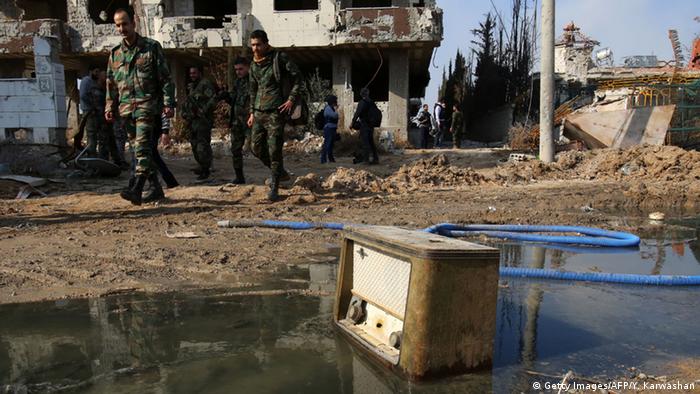 While the convoy to Moadamiyeh contained food parcels and flour, residents of Daraya were to receive medical supplies and baby milk in their first aid delivery since 2012.

Fewer than three weeks ago, regime troops turned away a convoy carrying food into Daraya while the delivery was held up on the outskirts of town.

"The last time, people were filling the streets waiting for the aid to come in," activist Shadi Matar told the AFP news agency from inside Daraya.

"This time, there was no one. They were afraid the regime will shell them and they know the convoy only holds medical aid," he said.

Smugglers use tunnels in Daraya

The UN has deemed the situation in Daraya and Moadamiyeh "horrendously critical," warning that children might soon be dying of malnourishment. Faced with the crisis, the International Syria Support Group, which includes Russia, set up Wednesday, June 1 as a deadline to deliver aid by road. If the deadline were not met, the UN would start supplying civilians via air drops.

Also on Wednesday, Moscow representatives in Syria announced a 48-hour "regime of quiet' in the area.

"On the initiative of Russia and in agreement with the leadership of Syria and the American side a 'regime of quiet' has been introduced for 48 hours […] in the settlement of Daraya to ensure the safe delivery of humanitarian aid to the population," Lt. Gen. Sergey Kuralenko said.

The rebel-held Daraya is located only several miles from the presidential palace of Bashar al-Assad in Damascus. Some 8,000 people live in the town, which was among the first to erupt in demonstrations against the Assad regime. It has been blocked off and regularly bombed since 2012.

Smugglers reportedly used tunnels to resupply the town and avoid the regime siege.

Syria's main opposition proposed a nationwide Ramadan truce on Wednesday in a letter from the coordinator of the opposition High Negotiations Committee, Riad Hijab, to UN Secretary-General Ban Ki-moon.

"The letter to Ban Ki-moon suggests a truce, we know there should be one, full respect of the truce across the country, nationwide, for the full month of Ramadan," opposition delegate Basma Kodmani said. "Ramadan being next week, that would start creating the right conditions, the right atmosphere, for us to return to [peace talks in] Geneva. This is the intention of the HNC."

She said opposition armed groups were backing the proposal, which would revive the "cessation of hostilities" that began at the end of February and applied to all groups except for Islamic State and the al Qaeda-linked al Nusra Front.

The UN has for the first time accused Syrian rebel fighters of committing crimes against humanity. The body has also criticized the government's use of siege warfare, and blamed the international community for inaction. (05.03.2014)