Ai Weiwei′s mother says her son′s arrest concerns everybody | Asia | An in-depth look at news from across the continent | DW | 06.04.2011 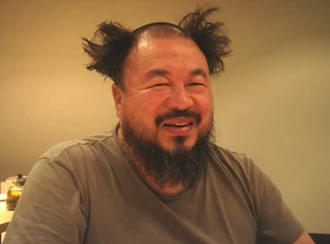 Ai Weiwei was arrested on Sunday at Beijing's international airport

Deutsche Welle: You published a handwritten missing person's report on the Internet. Were you not allowed to file it with the police?

Ying Gao: No, they did not even inform us. Now our house is being supervised, this telephone conversation too perhaps. My missing person’s announcement can be understood as a kind of public question to the police.

Are you worried that something bad could happen to Ai Weiwei?

I know my son. He has taken on the role of lawyer for ordinary people. If he sees injustice, he says something. He has paved a path for himself that might not have an escape route. When I asked him to stop for a while he said everything was so corrupt these days and he did not want to shut his eyes to that.

What are his driving forces in this struggle?

He always says: 'What is the point of life? You must know, mum. The point is to do something good.' He means that if nobody says anything, this country and society will not be able to develop further.

Do you know why he wants to build a second studio in Berlin?

When he began to feel insecure in China, when he could no longer work, he started to look for another place. They want to drive him away from here. He needs a calm environment for his art. Germany is best for him he said at the time. I had never thought that they would not even give him the chance to go abroad.

Everything has been confiscated. It is empty now. They have turned off the water and electricity, as well as the telephone lines.

Do you and your family feel intimidated?

You can find bones in an egg. So long as I do what’s right I am not worried. I am ready for any sacrifice.

Are you aware that many people have protested against your son's arrest?

In the wake of Ai Weiwei's disappearance, some German MPs have called for an exhibition of Enlightenment art in China to be shut down. The German government provided significant funds for the exhibition. (06.04.2011)

Chinese artist detained amid plans to open studio in Berlin

Artist and rights activist Ai Weiwei has been detained by Chinese authorities at Bejing's main airport. The detention comes amid a crackdown on regime critics and days after Ai announced plans to open a Berlin studio. (03.04.2011)

In China, artist Ai Weiwei is facing growing interference in his work from the communist government. In Europe, his prominence in rising. Now he is planning to set up a new studio in Berlin. (30.03.2011)