Ai Weiwei: provocateur without a passport

He's China's most famous artist - and probably also its most uncomfortable. Ai Weiwei isn't allowed to leave his country. But that doesn't stop the international community from celebrating him with a solo show in Berlin. The exhibition rooms of the Martin Gropius Bau museum in Berlin are stoically calm ahead of the April 3 opening of the Ai Weiwei exhibition. Some 6,000 wooden chairs are precisely placed in the museum's courtyard, blocks of marble that weigh several tons are hefted and plans are passed around.

The motto seems to be no rush, no stress, even though the 20 containers with Ai Weiwei's artworks arrived in Berlin seven days late due to a storm. "We are already scheduling such delays from the beginning on," said 39-year-old Garang, one of the five employees of the Chinese art star.

Setting up without the artist

Ai Weiwei's team set up the exhibition in Berlin on his behalf. It's the world's largest solo exhibition featuring his work - around 34 installations and sculptures as large as rooms, more than half of them specifically created for the Martin Gropius Bau museum.

"He gave us exact plans," said Garang. "We always take pictures in the evening and email them to him. And then we keep setting up according to his wishes the next day."

This artistic task force is necessary because Ai Weiwei himself is not allowed to leave China. He doesn't have a passport and authorities have refused to issue him one for the past three years.

He was arrested in 2011 based on vague charges and was put in prison for three months. The authorities in Beijing didn't approve of the famous artist's critiques of the Chinese government and the resulting media attention. Ai Weiwei has pressed for more freedom of opinion in his blog and denounced Chinese corruption in his art. 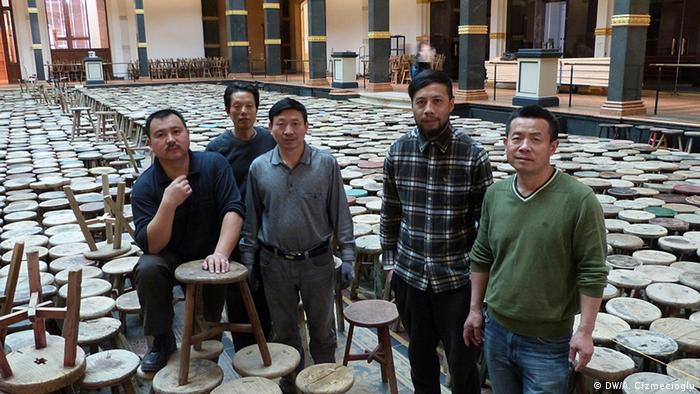 "That's why he is not allowed to show his art there. He is not allowed to speak out publically. Everything is censored," said Gereon Sievernich, director of the Martin Gropius Bau. During the two-year preparation phase for the exhibition, Sievernich visited Ai Weiwei in Beijing several times. "There are dozens of surveillance cameras in front of his studio. Everyone who goes inside is filmed."

Ai Weiwei tries to counter these repressive measures with humor, attaching bright red Chinese lanterns to the surveillance cameras. It's his way of ridiculing the state power. "For the exhibition he recreated cameras from marble as well as the cell he was locked in for 81 days," Sievernich said. And the title of the exhibition - "Evidence" - reflects this approach.

With his art, Ai Weiwei bears witness and reflects on the political oppression in his home country. And that's exactly how he has managed to become a global brand, a sort of art martyr from China, whose work is celebrated all over the globe, from Berlin to New York. 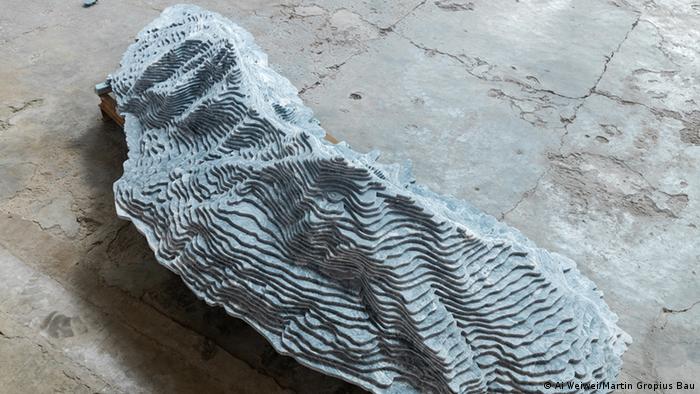 "He simply invented a language that's understood worldwide," Sievernich said. "His works relate to the societal realities in China and are absolutely sensual at the same time."

Esthetically rather than intellectually overwhelming, his art makes an impression, which is also clear in the Berlin show.

Bicycles as a metaphor

Exhibition visitors can stroll around marble islands - a reconstruction of the islands China and Japan have been fiercely fighting over for years. Ai Weiwei's huge bicycle installation flooded with light hangs at the entrance of the Martin Gropius Bau. It's comprised of 150 bikes welded together into a mega metaphor.

"You used to be able to see bicycles on China's streets everywhere and there was only a small lane for cars," Sievernich said. "But today that's exactly the opposite. It's become life-endangering to ride your bicycle in Beijing because of the car traffic and the air pollution." 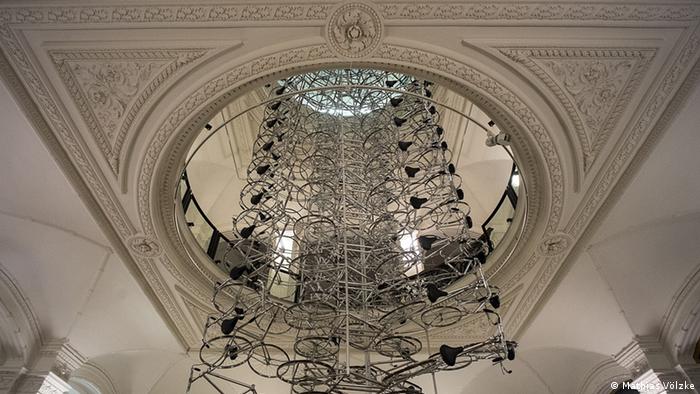 What's especially impressive is the precision with which Ai Weiwei explores the possibilities of the museum rooms with his works and how he has calculated their impact from more than one thousand kilometers away.

"He has never seen the Martin Gropius Bau from the inside," Sievernich said, who sent Ai Weiwei plans and photos of the historic building in the run-up to the exhibition. "Ai Weiwei is also an architect. Maybe that's where he gets his exceptional sense of space."

By now the 57-year-old is experienced in sending his art from Beijing to the international museum landscape. For that he needs the help of people like Garang, who has been part of Ai Weiwei's team for years, just like all the other carpenters and metal workers. They also set up Ai Weiwei's installation at the Biennale in Venice in 2013 without the artist being present.

But if you ask them about China's policies they remain silent. Why is Ai Weiwei not allowed to leave China? Why can't he present his work in his home country but is allowed to show it abroad? Is it because China is trying to say, "Look, he's allowed to work and be celebrated by the West; it's just that his art isn't good enough for us"? 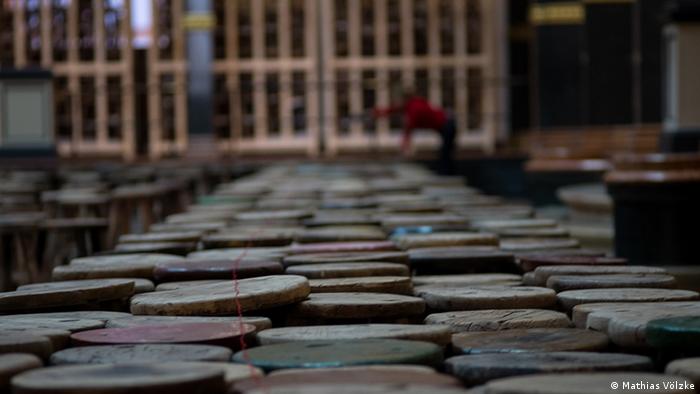 Ai Weiwei turned 6,000 wooden stools from the Ming and Qing dynasties into a work of art

Leaving the country to never return?

In fact, Chinese authorities are trying everything in their power to defame Ai Weiwei in his own country. He is being called a "pornographer" and large-scale campaigns denounce him as a "criminal" and a "spy for the West."

"The government in Beijing would love to let him leave the country but only if he promises to never return home," Sievernich suspected. But that's exactly what Ai Weiwei doesn't want. "He wants to be able to travel back and forth as a Chinese citizen, and to be able to freely express his opinion."

Meanwhile, an initiative comprised of cultural institutions in Berlin is trying to exert political pressure as well. Its appeal directly addresses German Chancellor Angela Merkel, asking her to personally demand that Ai Weiwei be allowed to travel. It remains unclear whether or not the artist will be able to attend the opening of his exhibition. But what Ai Weiwei has already proven is that he has a sense of humor: He invited China's head of state Xi Jinping to the show, which runs through July 7, 2014.