Ahead of World Cup final, Merkel and Putin talk Ukraine

German Chancellor Angela Merkel and Russian President Vladimir Putin have called for increased peace efforts in Ukraine. Three months of fighting in the country's restive east have claimed more than 550 lives so far. 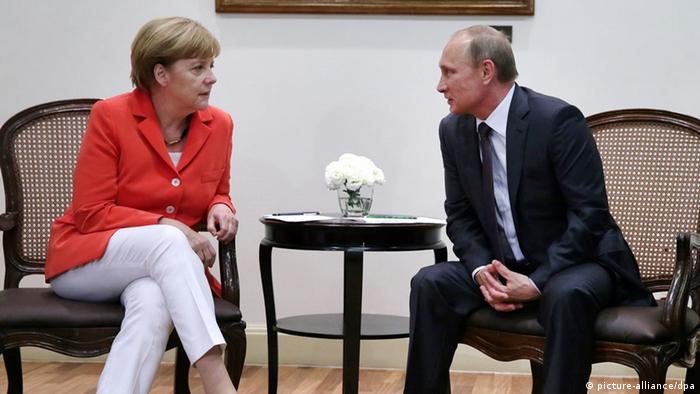 Meeting in Rio de Janeiro ahead of the World Cup final, the German chancellor and Russian president said Ukraine's conflict "has a tendency towards degradation," according to a spokesman. Merkel has urged Putin to influence separatists to help end the fighting that has killed hundreds in eastern Ukraine.

"Both Putin and Merkel stressed the necessity to urgently resume the work of a contact group on Ukraine, possibly in the format of a video conference," said Dmitry Peskov, the Russian president's spokesman. "It is their common opinion that, in order for the contact group to resume its work, a ceasefire needs to be declared as soon as possible."

German officials have consistently tried to help bring an end to the fighting in Ukraine. Numerous efforts to restore a ceasefire in place earlier in July have proved fruitless.

Because of the fighting at home, Ukrainian President Petro Poroshenko canceled his attendance at the World Cup, where he could possibly have spoken face to face with Putin, watching the Germany-Argentina match as part of a handover ceremony. Russia will host the next FIFA World Cup, in 2018.

Russia's Foreign Ministry has accused Ukraine of letting an errant shell hit a bordertown, killing one person and injuring two others. According to the ministry, the shell hit the courtyard of a residential building in Donetsk, Russia - near the Ukrainian city of the same name that has become a separatist stronghold - early on Sunday. Ukrainian officials have denied that the military fired a shell into Russian territory.

Despite the denial, the Foreign Ministry issued a statement calling the incident "an aggressive act by the Ukrainian side against sovereign Russian territory and the citizens of the Russian Federation." The statement also warned of the possibility of "irreversible consequences, the responsibility for which lies on the Ukrainian side."

It is not clear who fired the shell. Russia has repeatedly claimed that Ukrainian fire has hit settlements along the border, but no deaths have been previously reported.

Amnesty International has reported abduction and torture in the conflict.

Torrential rains and landslides have killed at least 58 people in a hilly town to the north of the city Rio de Janeiro. Authorities fear the death toll could climb higher.