After Syria: why the chemical weapon sarin is an invisible and indiscriminate killer | Science | In-depth reporting on science and technology | DW | 02.10.2013

UN inspectors say sarin was used in the mass killing near Damascus this August. What makes the nerve gas so deadly, why does it persist in the environment, and what can you do against its effects? 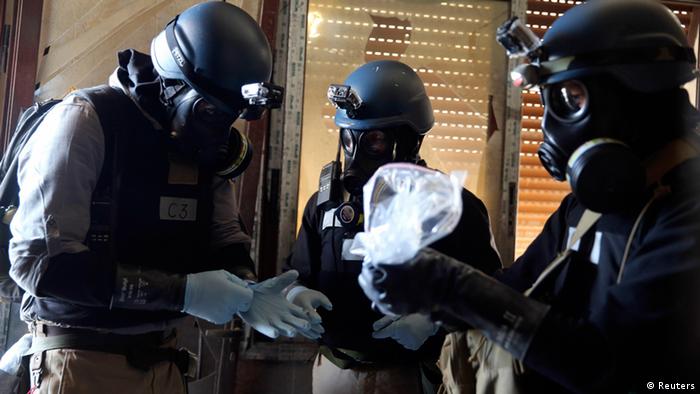 The poisonous nerve gas sarin is so potent that a tiny amount - less than a grain of salt if it were a solid - is enough to kill you. Sarin, which is stored as a liquid, is also as colorless and odorless as water when it evaporates in air, making it impossible to detect.

That's why scores of ordinary civilians collapsed, choked and died on a relatively cool August day on the outskirts of the Syrian capital Damascus, without knowing what had hit them.

Sarin mainly affects the body's autonomous nervous system - the involuntary muscles that control functions such as digestion, perspiration and salivation, as well as blinking, breathing or moving your arm.

"You'll find it extremely difficult to breathe because your brain will be telling your lungs to work in a normal way, but the message is getting interfered with and eventually you stop breathing," says organic chemist Rob Stockman of Nottingham University. 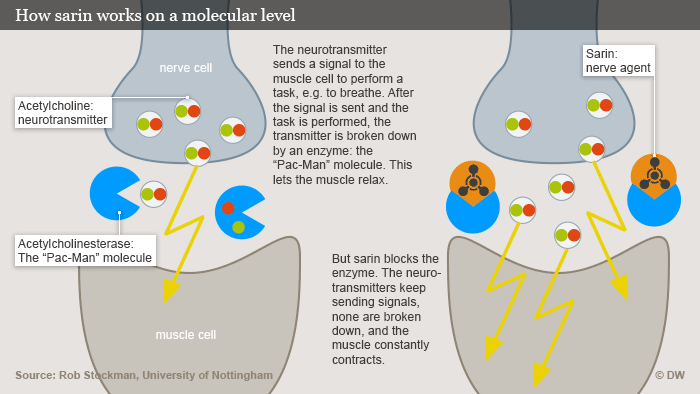 The signal to breathe, for example, is sent by nerve cells to muscle cells by chemical messengers called neurotransmitters. After a message has been sent, the neurotransmitter acetylcholine has done its job and is broken down by an enzyme. The byproducts are choline, which is recycled, and acetic acid which reacts with water to become vinegar before being excreted.

Nerve agents like sarin disrupt this process by blocking the work of the regulatory enzyme acetycholinesterase, which is found at all nerve junctions. Stockman calls this enzyme the "Pac-man" molecule.

"This Pac-Man molecule comes along and snips things in half [into choline and acetic acid]," says Stockman. "If you stop that [enzyme from functioning], you'll always have a very large level of neurotransmitters in the junction, so you'll have a constant on-switch for that muscle. The muscle will contract constantly. If it's your arm, it means you can't move it no matter what your brain is sending in electrical signals down the wires. At the junction with the muscle that signal's not getting through."

Stockman says the nervous system is like a stereo system that sends out electrical impulses in the form of music. In a similar way, human nerve cells release neurotransmitters that tell a muscle cell what to do. If the chemical message tells the eye to release tears and sarin is inhibiting the Pac-Man molecule, the eye will keep producing a non-stop flow of tears due to a build-up of acetylcholine.

"Obviously if you're telling the muscle to move, you want to stop it at some point," Stockman says. 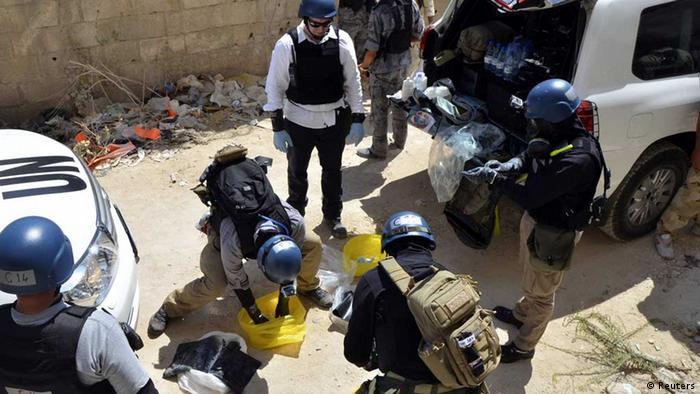 Sarin is fatal when this constant on-switch affects the diaphragm controlling the lungs. The nerve cells keep firing acetylcholine, which tells the muscle cells to breath in one direction only. The act of always breathing in, but not out, for example, can lead to death by asphyxiation.

Besides inhalation, sarin can also be absorbed through the skin and eyes.

There is an antidote. In fact, if your exposure is relatively mild, it's possible to survive a chemical attack.

One antidote is Pralidoxime, which works by detaching sarin from the Pac-Man enzyme. This reactivates the enzyme, allowing it to resume its normal function of breaking down acetylcholine.

But what do you do if you've no access to an antidote?

One first aid remedy is to breathe through a towel soaked in a glass of water mixed with one tablespoon of baking soda. The alkaline solution degrades sarin.

"The more alkaline the water the better," explains Stockman. 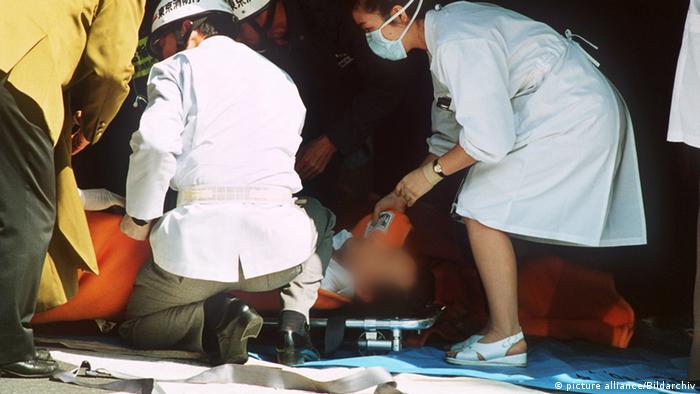 Home-made sarin was released in a Tokyo subway attack in 1995, killing a dozen people

Environmental factors can influence the effects of sarin. And sarin can have long-lasting effects on the environment, too.

In the Damascus attack, the number of casualties could have been higher than expected for that time of year was due to the relatively colder weather that day in August.

"The main problem with chemical weapons is that they're very difficult to control - they are subject to wind, and the delivery is much more difficult than high explosives," says Martyn Poliakoff, research chemist at University of Nottingham. "You don't know where exactly it's going to go. [Chemical weapons] often persist in the environment, so they can kill other people. It is this anonymous way of killing random people that everyone finds so repugnant."

Under 20 degree weather, the amount of time that sarin lingers in the air ranges from two to 20 days. At 25 degrees, that lifetime is halved from one to 10 days. Under very cold weather conditions, at 0 degrees for example, nerve gases can remain in the atmosphere for as long as a year.

"If it is cooler," continues Stockman, "you get less thermal cycling of gas in the air - the cooler air sits closer to the ground. But the other thing is the environmental lifetime of sarin. The hotter the temperatures, the quicker it reacts to moisture in the atmosphere and the quicker it will degrade and it will naturally react with water in the atmosphere." 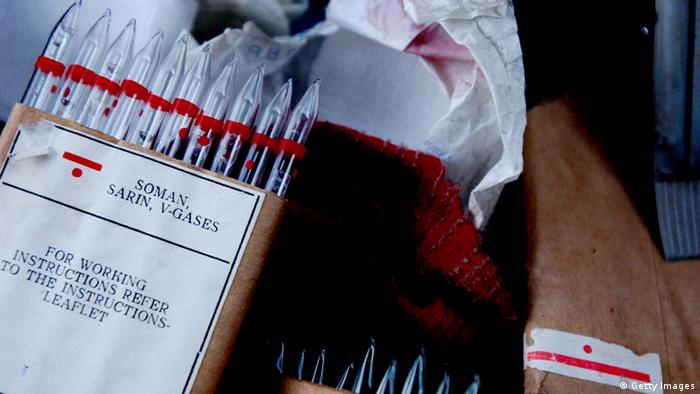 Forty veils of suspected Sarin gas - allegedly found in an house in Fallujah, Iraq, in 2004

Other climatic conditions help degrade sarin, such as humidity and the amount of sunlight.

It's possible that sarin and other nerve gases have only seldom been deployed as a weapon of war because the outfall is so unpredictable.

It was invented by the Nazis in the late 1930s. But they never deployed the nerve gases on the battlefields, or in the extermination camps, where Zyklon B, a cyanide gas, was used.

"In terms of the genocide, I think sarin was expensive and Zyklon B was cheaper and since the victims were captive, the speed of killing was not so important," surmised Poliakoff.

Chemical weapons made the headlines twice before in recent history. In Japan, a terrorist cult unleashed home-made sarin in a Tokyo subway attack that killed a dozen people in 1995. Several years before, Saddam Hussein deployed nerve agents in the Iran-Iraq war, killing thousands of civilians.

Germany approved deliveries of more than 100 tons of chemicals to Syria between 2002 and 2006 that can be used to make sarin gas, or for nonviolent civil purposes. Left- and right-leaning coalitions both did so. (18.09.2013)

How Syria can destroy its chemical weapons

German Foreign Minister Guido Westerwelle believes his country could contribute to the destruction of chemical weapons in Syria, both "technically and in other ways." Germany certainly has the know-how. (12.09.2013)

Chemical weapons come in gas or liquid form. They are produced with the express purpose of injuring or killing people. Syria is thought to have access to several types of these weapons of mass destruction. (26.08.2013)