After a campaign speech in Florida, US President Donald Trump was set to interview candidates to be his National Security Adviser. Newly leaked audio has also offered a window into his management style. 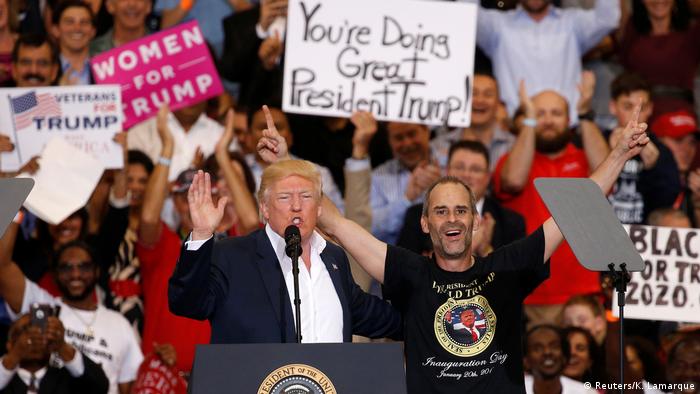 First lady Melania Trump opened the "Make America Great Again" rally at an aircraft hanger in Melbourne, Florida on Saturday by reading the Lord's Prayer - which Trump later said he was not expecting.

She described the America that she and her husband were seeking:  "A nation committed to a greater civility and unity between people from all sides of the political divide. I will always stay true to myself and be truthful to you, no matter what the opposition is saying about me."

President Trump returned to his theme of attacking the media. He accused the media of writing "one false story after another with no sources even though reporters pretend they have them."

He reprised campaign promises, including making strong borders, and said his administration would submit a new plan to "keep radical Islamic terrorism the hell out of our country." Trump said he wanted safe zones to be set up in Syria and elsewhere for refugees, to be paid for by Gulf states.

A small piece of wood was thrown at the presidential motorcade on Saturday afternoon. Five middle-school students were facing charges after a child from a local school confessed to throwing a piece of wood at the motorcade and implicated four other students.

Also on Saturday, website "Politico" released extracts from an audio tape obtained from a source at a reception at Trump's New Jersey golf club last November. Then president-elect Trump told his audience about the process of meeting potential cabinet nominees, apparently encouraging them to attend: "We're doing a lot of interviews tomorrow - generals, dictators, we have everything," Trump is heard to say on the tape. "You may wanna come around. It'll be fun. We're really working tomorrow. We have meetings every 15, 20 minutes with different people that will form our government."

The White House deputy press secretary Sarah Sanders said on Saturday that Trump was "giving a description of what is happening" rather than inviting club members to join him.

Trump was due to hold interviews with at least four candidates for the vacant National Security Adviser post on Sunday. Michael Flynn resigned and preferred replacement retired vice admiral Robert Harward declined to take the post over family concerns and Trump's refusal to provide him with control over staffing decisions.

"I'll make a decision over the next couple of days," Trump told reporters on Air Force One on his way to Florida on Saturday.

Spicer said that former CIA director David Petraeus was no longer under consideration. At the Munich Security Conference he too had spoken out over efforts by the White House to limit the adviser's authority.