After a deadly attack, what is the future for Nice? | Europe| News and current affairs from around the continent | DW | 22.07.2016

After a deadly attack, what is the future for Nice?

Young people in Nice go from shock to questioning their future. They fear increasing hatred within the community and division in the city that for so long was a symbol of carefree summers in France.

Rebecca Giraud sits on the doorstep of her family restaurant, the Balthazar, on the Promenade des Anglais. She has been there for days, staring into the glimmering candles that people have laid for the victims of the July 14 attack. The brasserie remains closed, and a memorial site occupies the pavement in front of the restaurant.

"Everyone was always talking about Paris, and no one ever thought this would happen here," says 23-year-old Rebecca. The restaurant belongs to her parents; she and her brother Alex help to run it. This is their town, but the famous Promenade is now changed forever.

Everybody had been working in the Balthazar as usual the night of the attack – Rebecca and Alex, along with their parents and a dozen employees. Suddenly people started running in the street outside and rushing in through the doors, seeking shelter from the truck. Along the seaside promenade, 84 people were killed, but it took some time for everyone to understand what had happened.

The restaurant's CCTV cameras recorded the mass panic. Rebecca and Alex keep going over the footage: "Look at my mom here," says Alex, pointing at the tiny monitor. "And here this woman is handing over her baby. People begin to understand what is happening. And we tell everyone to get inside quickly."

People flow into the bar, then into the kitchen. They fall, they crawl. Along with the Giraud's, the waiters try to calm everybody down. Later on, Nicolas and Sheharazad Giraud, parents of Rebecca and Alex, are proud of how well their children managed the situation.

In the En-Nour mosque, several kilometers from the city center, people gather for evening prayers. Imam Mahmoud Benzemia celebrates a special commemoration for the victims.

“We always have to justify ourselves and keep repeating that our religion has nothing to do with these acts," says Mr Benzemia. "We are caught in the crossfire." 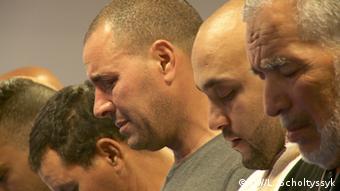 The En-Nour community lost several people in the attack

His mosque also lost members in the atrocity. Many of those attending prayers grieve for relatives, friends or colleagues. As the proceedings unfold, many are in tears.

Everyone here condemns the attack, yet, as Islamophobia is on the rise across France, they find it increasingly difficult to overcome the growing prejudices. Many now live in fear.

"With everything that has happened, we already know how people will react," says Mustapha Mahmaud, a young member of the community. "The extreme parties will exploit the situation and point the finger at Muslims and say it was our fault. It will become even more difficult to live together".

The National Front is already strong in Nice. The extreme right party won 40 percent of the vote in the last regional elections. Now, they are doing all they can to exploit the attack for their political gain.

Three days after the attack, the Balthazar team spends some time on the beach, seeking distraction. As they wait for the restaurant to re-open, Alex and Rebecca Giraud try to lift the spirits of their staff. Most are summer workers, many of them from abroad. Now, they search for a spirit of togetherness.

"We have become like a family since the attack," says Romanian bartender Alexander Farc, looking at the group.

Adnane El Khadiri can't wait to get back to work. As a Muslim he feels even more troubled:"I need to be with my colleagues, they will help me forget and we will get through this together.” 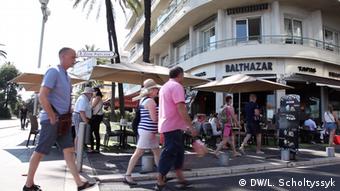 All around Nice's beautiful beach, holidaymakers are back to enjoying the generous Mediterranean sun. They already seem to have pushed away the memories of the gruesome attack.

'A threat for our generation'

The next day, the Balthazar reopens its doors. The flowers and candles out front have been removed. In a nearby square, the City wants to create a permanent memorial.

The restaurant is less busy than usual, but things seem to be picking up.

"We thought nobody would come today," Alex says. But people are back, laughing on the terrace and life goes on. "This is good for business", Alex tries to joke. But he is torn between running the restaurant and his emotions.

"For the tourists it's different", he adds. "This is not their city and not their country. They will all go back home and forget. But for us - we live here."

And apart from their haunting memories, Alex and Rebecca are concerned about the future. They fear the fractures in French society will become even deeper, and life more difficult for everybody.

"Sorry, that we are handing over the world to you in this condition" their mother said to them after the attack. Every one in the family understands that the young will carry the burden and will continue living with this threat.