Africa contributes the least to global greenhouse emissions, but it’s hardest hit by climate change. And an ever growing population is depleting the continent of its natural resources. 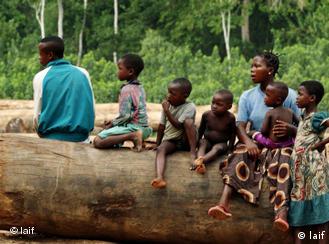 Protecting the environment for future generations is a major challenge.

Learning by Ear explores the relationship between people and the environment in Africa. Forests are cut to pave the way for agriculture. People hunt animals and fish wherever it’s possible. Many cities seem to drown in garbage, because garbage collection is too expensive for the poor, urban communities. And a new threat is looming: More and more Africans have developed a taste for cars – contributing to an increase in greenhouse emissions.

The effects of climate change are already being felt in many parts of the continent. Rainy seasons are becoming shorter, the temperatures are rising and water resources are scarce. Local residents bear the brunt of this change. They can no longer grow their usual crops and lack the water they need to survive. Moreover, wetlands and forests that are host to rare plant and animal species are dying out.

In addition to bringing your listeners all the facts about the environment and the challenges it faces, Learning by Ear is also breaking new ground. A radio drama introduces four high school students on their quest to understand the environment around them. It’s a great chance for listeners to follow them and find out more about saving the world in which they live.

Read what other people think about the Serie "The Environment - A lost paradise under threat" on the next page.

"I really think the topic that dealt with the pollution created from people’s garbage thrown into the sea is very interesting. That is really one of the problems seriously affecting the African continent – and São Tomé and Príncipe is no exception. I hope that you will take up subjects like these in the next series of Learning by Ear to communicate these messages further, particularly in Africa."
(Adilson Castro, Budo-Budo, São Tomé and Príncipe)

"I find the new series of Learning by Ear radio dramas very apt – because here in Angola we’ve seen a great deal of environmental destruction, even though our nation is wealthy compared to other African countries. I am convinced that learning is the key: with educated young people, the future is in safe hands."
(Figueiredo Cassinda, Huambo, Angola)

"Before the presentation of the Learning by Ear episode, on how to process polythene waste and the bad effects on the environment, that improper disposal causes, I presumed that there is nothing which is not degradable, once buried in the soil. Sincerely, this programme is entertaining and really satisfying us. We are hoping that our leaders would enact a law controlling all polythene producing industries. The people should learn to use and dispose polythene materials in a proper way."

All the facts and statistics about Africa's environment one can possibly imagine: The Africa Environment Outlook online.

Information about African youth and the environment, provided by the United Nation Environment Programme's regional office for Africa.

Tired of reading statistics? Get a grip of the world's environment by trying this online game, provided by the US Environment Protection Agency.

Latest reports about the state of the environment

The British newspaper "The Guardian" gives you an ovweview over their latest reports concerning the state of the world's environment.