The Desertec initiative to provide solar power to Europe from Africa should take poor nations' development into account, according to the guest commentators Romy Chevallier and Matthias Ruchser. 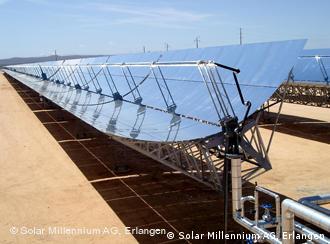 Desertec should benefit African as well as European nations

The Desertec consortium was founded in Munich on July 13. Proponents of the venture expect that it could facilitate the use of large-scale concentrated solar power (CSP) to meet some 15 percent of Europe's electricity requirements by 2050, through the harvesting of renewable sources in the Middle East and North Africa. Such an indication has stirred-up general optimism and excitement regarding the expanded use of renewable power, and certainly it seems clear that Europe's energy future will include a fairly significant renewable component.

Nevertheless, debate continues around technical matters, such as whether energy supply should be predominantly centralized or decentralized and whether the balance of advantages and pitfalls in the renewable sector outweighs the balance in the conventional power generation sector.

Such debates, however, are rather nonsensical for the majority of the developing world, which does not yet have the luxury of choices regarding energy supply. In Africa, energy poverty is rife, with sub-Saharan Africa alone having 570 million people without access to electricity. The continent as a whole is currently the lowest per capita energy consumer in the world, accounting for only 3 percent of the globe's primary energy consumption. It also has the highest share of traditional biomass consumption, with 59 percent of its population still relying on traditional - and inefficient - sources of energy such as firewood.

Africa is, therefore, more concerned about access to a modern energy supply, in the form of electricity, than the sustainability and cleanliness of the supply. Certainly, expanded access to electricity in the developing world has the potential to lead to significant enhancements in living conditions, in sectors such as health services, communication, information and education. Access to electricity can also enhance the competitiveness of developing countries, while a lack of electricity inflates production costs and makes competition in the global market difficult. Indeed, access to electricity is a prerequisite for economic growth and sustainable livelihoods, and is thus a fundamental ingredient for the achievement of the United Nations Millennium Development Goals. 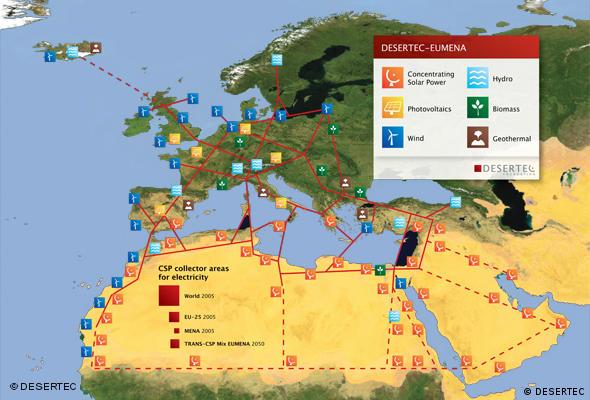 Desertec would transport electricty from Africa to Europe

However, in the current global context of increasing awareness of climate change, Africa cannot afford to ignore its environmental challenges and so faces the dilemma of having to meet significant development needs while taking into account issues of sustainability and cleanliness.

Energy demand per gross domestic product is much higher in developing countries than it is the industrialized world, while subsidized electricity from fossil fuels is much cheaper. In order to fulfill their ambitious growth trajectories, African countries will continue to invest in new energy infrastructure, and in large part, these investments are in conventional power plants rather than in renewable energy sources, which still face many barriers in their implementation. There are also other challenges such as the higher up-front capital costs of renewables, and in the case of concentrated solar power, the technical expertise is concentrated within a small number of institutions, and the technical and financial risks are perceived as being too high.

In order for Africa to deal with this contradiction successfully, it needs to find alternative energy sources that make economic sense while simultaneously addressing its socio-economic agenda. Efforts to mitigate and adapt to climate variability should therefore be complementary to the broader economic agendas of African countries. This would include an increased investment in low-carbon, highly efficient technological innovation that will improve access to energy in rural areas.

Engineers illustrate that decentralized energy production with photovoltaic, solar heat or small-scale bioenergy function best off-grid and locally - meeting the needs of a scattered rural population. Centralized options such as CSP, hydro or large-scale bioenergy will be appropriate for industrialized or densely populated areas where a continuous base load is needed.

Interestingly, low-carbon technologies, such as solar energy, are widely held to have positive socioeconomic spin-offs. Figures from Desertec, for example, indicate "240 000 new German jobs" and “2 trillion euros in profits for European companies by 2050." Of course, the employment and economic gains of this particular project seem largely confined to Europe. 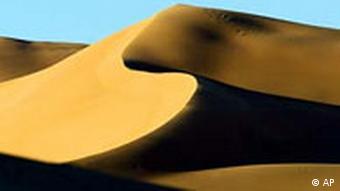 The Sahara desert is about 9 million square kilometers

Nevertheless, the decision to situate a large portion of the Desertec project in Africa raises the profile of the continent’s potential for sustainable power generation. Certainly, sub-Sahara Africa shows large solar potential, with recent studies having shown that the amount of solar radiation per square meter on average is higher in South Africa, Namibia and Botswana than most other regions (2,950 kWh/m2/year in the Northern Cape region compared to 2,350 in the Sahara or 1,700 kWh/m2/year in southern Europe). Studies have also shown that solar resources decrease as one moves north from the Kalahari Desert. A study by the German Aerospace Center showed that 65,000 square kilometers of CSP in the Sahara Desert would be sufficient to meet the world's electricity demand.

Africa also has the potential to deliver on some of the technical requirements for renewable power projects. For example, South Africa already uses advanced high voltage direct current (HVDC) technology in its Cahora Bassa hydroelectric collaboration with Mozambique. Further, South Africa has an advanced automotive industry, producing manufactured parts required for CSP, such as glass, coatings, electric motors, gearboxes and space-frames. This has the potential to create a significant number of jobs in the manufacturing sector.

So far, the Desertec initiative is a vision to be completed by the year 2050. The next three years, which the Desertec consortium will use to develop viable investment plans, will show if this vision can become a reality. It is critical that the development needs of the South are taken into account in this planning process, not only in terms of its electricity requirements, but also in terms of its potential to contribute to the project in a manner that can enhance socioeconomic development. Under these conditions, Desertec can become a driving force in the equitable fight against climate change, and can form part of a tidal wave of innovative solutions beyond coal, gas and nuclear – both for the North and the South.

Given the upcoming World Solar Congress in Johannesburg this October this may provide SSA an opportunity to engage in this debate and provide a regional response for its inclusion in Desertec and similar projects.

Romy Chevallier is a researcher on the EU-Africa Program at the South African Institute of International Affairs (SAIIA) and Matthias Ruchser is a consultant in the energy industry and founder of Energetic Consulting.

A fraction of the Sahara desert could provide enough solar electricity to power the planet. The problem has always been getting energy to where it's needed. Munich Re, a leading reinsurer, thinks this can now be solved. (17.06.2009)