Afghanistan: What Taliban′s new media rules mean for female actors | Asia | An in-depth look at news from across the continent | DW | 28.11.2021

By imposing new restrictions on the media and female actors, the Taliban have once again reaffirmed their misogynistic ideology, rights advocates have said. 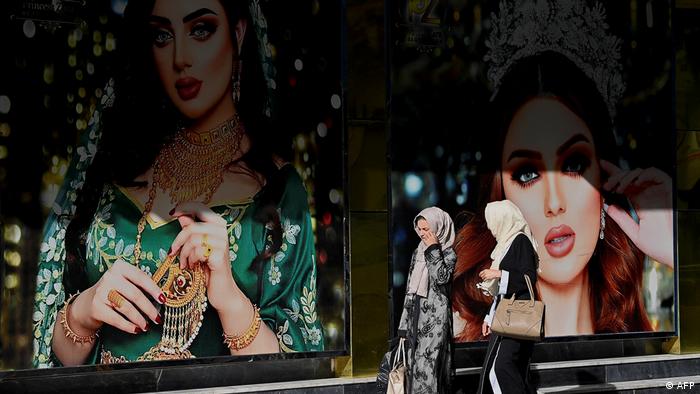 Even though Taliban officials have said women's rights will be protected, many people have remained skeptical

The Ministry for the Promotion of Virtue and Prevention of Vice — which replaced the Ministry of Women's Affairs after the Islamic fundamentalist group seized power in the country in August — also told broadcasters not to screen films or programs that are "against Islamic or Afghan values."

The broadcasting of films that promote foreign cultures or traditions in Afghan society, or which provoke immorality, is also to be prohibited, the directive said.

Women TV journalists, however, are allowed to present their reports if they wear the Islamic hijab.

The Taliban's interpretation of the hijab — which can range from a hair covering to a face veil or full body covering — is unclear, and the majority of Afghan women already wear headscarves.

The attempt to regulate the media comes three months after the Taliban swept back into power.

"It makes me speechless, even though I expected something like this," said Sahraa Karimi, an Afghan film director.

Karimi had been the president of the Afghan Film Organization, a state-run film company, until she fled the country on August 17.

The 36-year-old, who spent her youth in Iran and studied in Europe, was the first Afghan female director who dared to make a film in her home country.

"With these new guidelines, the Taliban want to show artists and directors who remain in Afghanistan how the group intends to change society and what has to be paid attention to," she said.

Karimi doesn't believe anyone will resist the new regulations. "Everyone knows that it is a matter of life and death. Some will even have to work with the Taliban. The Taliban will now commission new films for their propaganda and try to change the aesthetic tastes of society and establish a new image of women in society," she added.

The director said she has been "living out of a suitcase" since fleeing Afghanistan and traveling from one film festival to the next. "It was never easy for women in Afghanistan. I, for example, always had to fight to assert myself as a woman," she said.

Karimi said it's sad to see that at a time when the film industry is being expanded even in countries like Saudi Arabia, which is dominated by Wahhabism and a strictly traditionalist Sunni Islam, the Taliban in Afghanistan "are ruining everything we achieved."

Banishing women from the public sphere?

The new rules mean many shows rolled out to fill TV schedules, notably soap operas produced in India and Turkey, will be deemed inappropriate, making it difficult for channels to generate enough output and retain audiences.

Since retaking power in Afghanistan, Taliban officials have sought to make public assurances that women's rights will be protected, but many advocates and women have remained skeptical.

The Taliban's real goal is to banish women from the public sphere, said TV journalist Saleha Soadat, who asked DW not to reveal her whereabouts for fear of potential retribution.

Soadat, who was formerly well-connected in Kabul, now fears for her life.

"Many female journalists have now left Afghanistan. Those who stayed back know that they live in constant danger and may never be able to work in Afghanistan again," she said.

Soadat, who has always worn the hijab, stressed that the Taliban's new rules have nothing to do with Islam. "They are pointless and ridiculous. Because even before these new regulations, women in the Afghan media always adhered to Islamic customs and culture, precisely because Afghanistan is an Islamic country."

In her view, the Taliban have a fundamental problem with the presence of women in public.

"They see this as a disgrace to society," she said. "There are no women in their government. Female employees have been sent home. Girls are not allowed to go to school. Now women are to disappear from the media."

"We call on the international community to never recognize this terrorist group. Because they don't believe in humanity and human values and human rights, which include freedom of expression," she underlined.

International community is in a quandary

In order to provide much-needed humanitarian aid to Afghans, foreign governments and NGOs have no other option but to cooperate with those in power, which amounts to de facto recognition.

The Taliban, for their part, have tried to dress up their anti-women measures as instruments against the spread of "immorality" and the violation of the Islamic law, or Shariah. How they interpret Shariah has hardly changed since they last ruled Afghanistan in the late 1990s.

Even at that time, they said they wanted to create a "safe environment for women, where their chastity and dignity are inviolable."

Women were forced to cover themselves from head to toe in public and wear the burqa. They were not allowed to leave the house without a male companion and were barred from seeking education as well as working outside the home.

Afghan filmmaker Sahraa Karimi: 'The Taliban do not value art'

Speaking at an event in Bonn, the Afghan director urged global powers to not negotiate with the Taliban in an attempt to resolve the crisis in Afghanistan.

Women's football is so frowned upon by the Taliban that they have allegedly burned down some players' homes. DW spoke to the former national team captain, Khalida Popal, who's trying to get her compatriots to safety.