Fears over rights under Taliban rule are rising after the Islamist militants closed the Afghan Women's Affairs Ministry and ordered only boys back to schools.

Schools re-open in Afghanistan – but not for girls

Primary school students in Kabul returned to classrooms on Saturday with gender-segregated rooms, while older girls were excluded from going back to school.

The Taliban, who now rule Afghanistan after seizing power last month, had ordered only boys and male teachers back to the classroom.

But girls faced an anxious wait with no clarity over the resumption of their studies at the secondary school level as the Taliban-run Education Ministry made no mention of their return.

During their previous rule of Afghanistan in the late 1990s, the Taliban had denied girls and women the right to education and barred them from public life.

The fundamentalist group has sought to portray itself as more moderate than it used to be. But so far, their actions seemed to pave the way for the return of their hardline ideology.

The Taliban have shut down the Afghan Women's Affairs Ministry — and replaced it with a ministry for the "propagation of virtue and the prevention of vice." A department with the same name was notorious for enforcing strict religious doctrine during the Taliban's first rule two decades ago.

Employees of the Women's Affairs Ministry have complained in the past few days that they were losing their jobs. 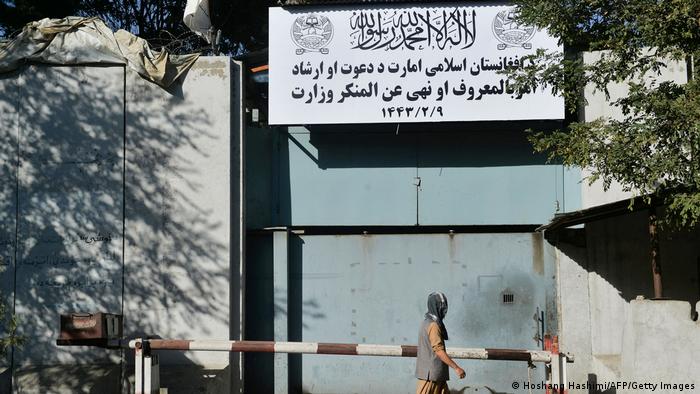 According to the AP news agency, staff of the World Bank's Women's Economic Empowerment and Rural Development Program, which was run out of the ministry, were escorted off the grounds on Saturday.

The United Nation's children's fund (UNICEF) said it was "deeply worried" for the future of girls' schooling in Afghanistan.

"It is critical that all girls, including older girls, are able to resume their education without any further delays. For that, we need female teachers to resume teaching," UNICEF said in a statement.

UNESCO's Director General Audrey Azoulay on Saturday added her voice to growing fears over the Taliban's limitations on girls' education.

"Should this ban be maintained, it would constitute an important violation of the fundamental right to education for girls and women,'' Azoulay said in a statement upon her arrival in New York for the opening of the UN General Assembly.

The Afghan Women's Network chief Mahbouba Seraj said she was astounded by the flurry of orders released by the Taliban-run government restricting women and girls.

"It is becoming really, really troublesome. ... Is this the stage where the girls are going to be forgotten?" Seraj said. "I know they don't believe in giving explanations, but explanations are very important."

Schools re-open in Afghanistan – but not for girls