Afghanistan: LGBTQ people fear for their lives under Taliban rule | Asia | An in-depth look at news from across the continent | DW | 10.09.2021

Afghanistan: LGBTQ people fear for their lives under Taliban rule

Less than a month after they returned to power, the Taliban have begun going after LGBTQ people in Afghanistan. Members of this group reflect on their fears and the brief moments of freedom they used to have. 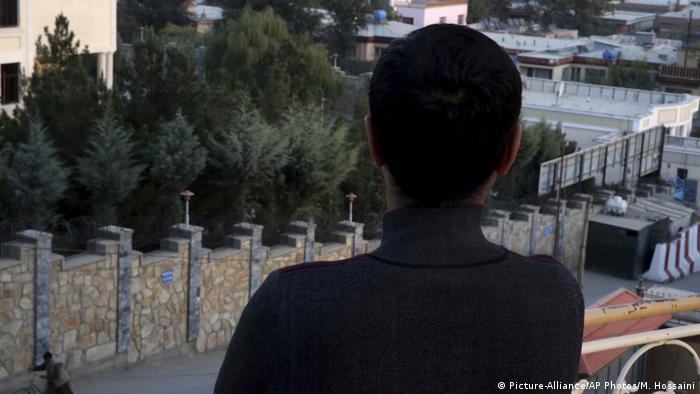 On the afternoon of August 26, 20-year-old college student Rabia Balhki (name changed to protect her identity) was pushing her way through the crowd outside the Kabul airport. Nearby, Taliban fighters occasionally fired warning shots into the air while beating people with sticks.

In panic, people fled in all directions, making it even more difficult for Rabia to access the airport. But she remained undeterred. Rabia told DW that she was desperate to flee Afghanistan as she was a woman and also a lesbian.

For the Islamic fundamentalist group, the LGBTQ community's presence is not acceptable.

After overcoming all the difficulties, Rabia finally reached the airport entrance, but the Taliban officer who was guarding the gate refused to let her through. She had no choice but to turn back and leave. An hour later, a suicide bomber detonated an explosive in the crowd and one of Rabia's relatives died on the spot.

Rabia is glad to have escaped the attack, but she doesn't know if she will survive the Taliban's hunt for LGBTQ people. "The Taliban think we are like the waste in society," she said. "They want to eliminate us."

No space for the LGBTQ community

The LGBTQ community in Afghanistan has always lived a secret life, since homosexuality is considered immoral and un-Islamic in the country.

If convicted of engaging in gay or lesbian sex, a person can be imprisoned for life under the nation's 2017 penal code, and under Sharia — Islamic law — even the death penalty is technically allowed.

According to the LGBTQ advocacy group ILGA-World, successive Afghan governments have not enforced the death penalty for gay sex since 2001, but the Taliban might deal with the issue differently.

In the new Taliban-controlled Afghanistan, there is little to no space left for LGBTQ people.

In an interview with the German newspaper Bild in July, Gul Rahim, a Taliban judge in a province in central Afghanistan, said: "For homosexuals, there can only be two punishments: either stoning, or he must stand behind a wall that will fall down on him. The wall must be 2.5 to 3 meters (8 to 10 feet) high."

A few days after the Taliban entered Kabul, a 25-year-old gay man, Faraz (name changed to protect the identity), learned about the death of a gay friend. He isn't sure which penalty his friend received. All he knows is that the Taliban are serious about going after gay people and he might face the same fate.

"He was caught by the Taliban through complaints filed by others. The Taliban took him somewhere, killed him, and then brought his body back to his family," Faraz told DW.

"There is a specific group within the Taliban that searches for gay people," Faraz said. "They go from street to street, and when they find out who is gay, they don't hesitate to kill them."

Afghan-American LGBTQ activist Nemat Sadat told DW that in the first two weeks after the Taliban takeover, he received 357 messages from members of the Afghan LGBTQ community, but only one of them had managed to leave the country. She was able to leave for Spain.

Sadat compiled a list of LGBTQ individuals and submitted it to the US State Department, but since the US had ended its evacuation mission on August 31, the plan to evacuate LGBTQ people has become more difficult to execute. "It's going to be a long fight," Sadat said. "It's going to be a multi-year project."

But Sadat is not sure how much time his fellow Afghan LGBTQ brothers and sisters still have.

"The Taliban said they can grant amnesty to journalists and people who have helped Western governments and allow women to continue their education. People are still suspicious of them, but at least they gave a promise," Sadat said. "But for the LGBTQ community, the Taliban didn't even bother to pretend to give a promise."

Born in Afghanistan in 1979, Sadat moved overseas with his family when he was 8 months old and eventually settled in the US. In 2012, he returned to Afghanistan to teach at an American school as an assistant professor and began raising awareness about LGBTQ issues.

"There was hardly any LGBTQ-related discussion at the time. I arranged debates in class, asking students to speak for and against the LGBTQ community," Sadat said.

Sometimes he would work with international organizations and do presentations on LGBTQ topics.

"We were careful not to leave any document," Sadat said. But even so, he still received a backlash from the then-Afghan government, leading to his dismissal from the job and his return to the US in the summer of 2013.

At the time, he was forced to come out publicly, making him one of Afghanistan's first openly gay activists.

After that, Sadat began to receive letters from LGBTQ people in Afghanistan. This way he discovered that even though the local LGBTQ community was repressed, it still played a key role in driving social progress on various fronts.

Over the past two decades, Afghanistan made some progress in accepting LGBTQ people, say rights activists. They managed to enter professions in mass media, helped produce talk shows and arranged youth education programs dedicated to sensitive topics, among other things.

"People say Afghanistan didn't change, but I disagree with that," Sadat said. "These LGBTQ people have put efforts into changing Afghan society."

For Faraz, the previous Afghan government was oppressive toward the LGBTQ community, but if they were caught by the police, they were at best jailed or fined. This resulted in creating some space for a low-key LGBTQ scene in Kabul.

"There are still some places for gay men to meet in the city, and I also use dating apps to meet people," Faraz told DW.

But he says he is wary of using those apps now, because he's afraid that the Taliban will use different tricks to lure gay men in. He pointed to instances when the Taliban had approached gay people through social media by posing as journalists.

Isolated and depressed at home

Faraz also said that many gay people have now turned off their cell phone location, fearing that the Taliban could track them through their mobile phones. LGBTQ people have also stopped meeting others who know about their sexual identity.

"I don't have much connection with others. I don't have people to complain with," Faraz said.

Rabia, the lesbian woman, has left her house only twice in the past three weeks: one time to the airport and the other time to the bank to withdraw money.

She's afraid of running into members of the Taliban on the street. She's also scared that if they learn about her sexual identity, they'll come after her.

"It's so boring at home. I tried to read some books so that I don't feel depressed," Rabia said.

A migration official said the introverted nature of the 18-year-old refugee was at odds with homosexuals "being rather social." The young man feared for his safety in Afghanistan, where homosexuality is illegal.