German politicians, reporters and Twitter users have slammed AfD's deputy chief, Beatrix von Storch, for her allegedly racist remarks against the German football team. The right-winger claims she was misunderstood. 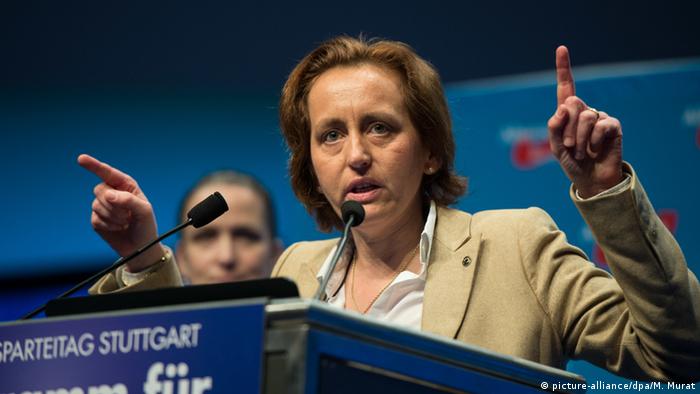 The high-profile AfD politician commented on the Germany's loss to France in the semi-final match of the Euro 2016 football championship.

Other Twitter users responded with outrage to what they perceived to be a jab at football players with foreign roots. Germany's national selection boasts several footballers with immigrant parents, five of whom played against France on Thursday night.

"Pure stupidity," senior Social Democrat Ralf Stegner tweeted back. "Who is this wretched person that cannot be happy that we are the champions of the world," deputy of the Greens Omid Nouripour wrote, referring to Germany's 2014 world title.

"I've just been reading the Twitter feed of this Storch woman and I think I need to puke," user Celine wrote.

An editor of Bild, Germany's top mass-circulation newspaper, called von Storch a "dumb racist," with hundreds of others joining the accusation of racism. A Catholic bishop from Hamburg, Hans-Jochen Jaschke, said the politician's statement "deserves a permanent red card."

Gauland stated that the people in Germany "don't want to have a Boateng as their neighbor," despite appreciating the black football star for his sporting achievements.

Boateng was also at the center of another racist controversy in May after suspected supporters of the anti-Islam group PEGIDA criticized the fact that childhood pictures of Boateng and fellow national team player Ilkay Gündogan, who is of Turkish descent, appeared on the packaging of a popular chocolate brand, in a special edition ahead of the 2016 European Championships.

@dwnews - Outpour of support for Boateng after 'neighbor' remark

On Friday, however, Von Storch deleted her controversial tweet and denied any intent to stir prejudice. Instead, she said she was complaining about the media, who no longer refer to the footballers as the "national team" in German.

"Our national team has deserved to pass through after their best game of the tournament. And: I still call them 'the national team.' Because that is what they are, with all their players – our national team," she wrote on Facebook.

She also slammed "Bild & co" for reading her statement as "race baiting."

"A person not accepting a 'halt' on our border is an attacker. And we need to defend ourselves against attacks," said von Storch, who is a member of the European Parliament.

Her party also faced an internal split over anti-Semitic sentiment this week.

A Infratest Dimap poll puts the support for AfD in Germany to 12 percent.

Leading figures from German football have slammed comments made by the deputy of the populist party Alternative for Germany about national team player Jerome Boateng. The party has a radical anti-immigration stance. (29.05.2016)

In its new party platform, the AfD is exploiting the widespread fear of Islam and paints a simplified picture of a threatening religion. Muslim organizations and political parties in Germany are outraged. (18.04.2016)

Germany, France, Portugal, and Hungary form Euro 2020’s 'Group of Death.' Making it out of Group F will be an uphill task even for the reigning World Champions. But their coach Didier Deschamps is out to make history.