Despite their best efforts, Zimbabwe have struggled at this year's Africa Cup of Nations. This is little surprise, considering the major challenges football is facing in the economically beleaguered country. Zimbabwe's players celebrate their only goal of AFCON 2021, which came against Malawi

Zimbabwe's qualification for the Africa Cup of Nations was an achievement in itself. The country is football-mad, but all that enthusiasm simply can't compensate for the struggling economy.

Zimbabwe's once-thriving economy was systematically destroyed during three decades of autocratic rule. Today, the people of Zimbabwe are among the poorest in the world.

Corruption is part of everyday life in the country, including in football. Last November, the government-appointed Sports and Recreation Commission (SRC) suspended the entire board of the Zimbabwean Football Association (ZIFA) over several allegations, including fraud. Since then, the country's football affairs have been under the direct oversight of the Ministry of Sports.

Fitting then that the Warriors traveled to AFCON with an interim head coach after Zdravko Logarusic was fired in early December after a run of 11 games without a win. The highly regarded Norman Mapeza, who spent a decade abroad as a player in Turkey and Austria, was brought in for this tournament.

Mapeza, who made 50 appearances as a player for Zimbabwe, is just the sort of person Klaus-Dieter Pagels has in mind when he speaks about how the country desperately needs people who really care about the development of football.

"Zimbabwe has a great potential with professionals with a passion for football who are not being utilized," the former German Football Association (DFB) development coach, who trained more than 1,200 coaches in Zimbabwe fromn 2010 to 2013, told DW. 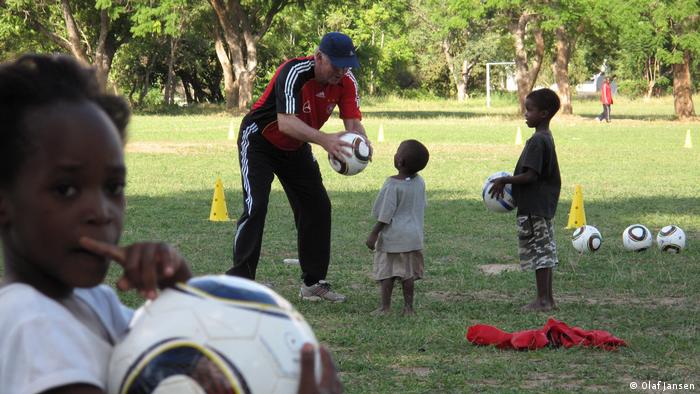 "All of the coaches I trained back then are just waiting for the chance to start working," Pagels said, referencing the lack of paid coaching jobs in the country.

Pagels also keeps in touch with players he got to know during his year as national team coach in 2012 and 2013, including Knowledge Musona, who is part of the Zimbabwe squad at the African Cup of Nations.

"Musona told me that preparations for the tournament were more professional than ever before," Pagels said. He added that the team had a good training camp and that the players had been paid on time.

"That was different prior to the 2019 tournament in Egypt," Pagels said. "Back then, the money was still being negotiated the night before the first group-stage match."

When Pagels thinks of the women's game in Zimbabwe, the first person who comes to mind is Kwinji Sibanda, the current coach of the women's national team.

Under Pagels the now-40-year-old learned the basics of coaching before taking a three-week A-license training course in Germany and finally, in 2018, a one-year advanced FIFA training course.

"Kwinji is passionate about football and an excellent teacher. She speaks the players' language and has a knack for explaining things very well," Pagels said.

The women's national team is very close to qualifying for the 2022 Africa Women Cup of Nations to be held in Morocco in June. A knockout clash with Botswana is still to come in the final qualifying round. "We can really make it to Morocco," Sibanda told DW.

Sibanda hasn't just coached women either, having spent several years as a co-coach at FC Tsholotsho — making her the first woman coach in the history of Zimbabwe's top men's division. "Many men could certainly take an example from her energy and enthusiasm for the cause of football," said Pagels, who, years after his work there ended, continues to maintain close ties to the country, in part thanks to the fact that his daughter is married to a Zimbabwean.

Sibanda is doing what she can to keep women's football in Zimbabwe on the right track. She has just returned from a tour of rural areas in the north of the country, where she visited a number of schools full of girls interested in the game.

"Zimbabwe's women's football needs sponsors committed to development, who could provide support to grassroots projects. We have enough talented young players here — they just need to be encouraged. But that's only possible if you give them a little support," Sibanda said.

Sibanda still has a lot of plans in Zimbabwe, but she would also be open to taking a job beyond the country's borders.

"I could gain experience abroad that would later benefit me in my home country," she said.

By all accounts, his experience abroad helped make her male counterpart, Norman Mapeza, a better coach. But all the coaching experience in the world can hardly compensate for the severe challenges the game will continue to face as long as the economy remains in tatters.