Addressing climate change in the classroom

How can educators best teach the complex issues and realities surrounding global warming? There are no easy answers but experts agree on one thing – climate education is in dire need of improvement. 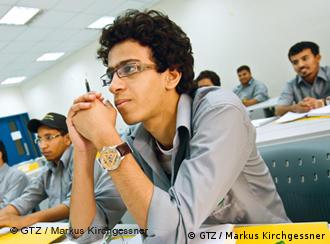 The complexities of climate change are rarely tackled in classrooms

Everyone is talking about climate change. In recent years, global warming has been the subject of extensive research, press reports and conferences. Following the UN climate summit in Mexico earlier this month, the environmental question of the century would appear to be widely understood.

But impressions can be deceptive, and as a recent EU Commission survey revealed, one quarter of Europeans are climate skeptics. Almost half admit that they are inadequately informed about global warming.

“There is broad superficial understanding, but to probe a little deeper is to reveal great gaps in the public knowledge,” Udo Kuckartz of the University of Marburg said. “We need new models for climate education, new approaches which turn environmental knowledge into environmental action.”

From knowledge to action

That leads to an important question - how can teachers address climate change in classrooms in a way that actually leads people to change their behavior and switch to a low-carbon lifestyle?

Educators and psychologists all over the globe are currently seeking answers to that question. And in order to find them, they first need to establish which teaching models are already in use and which of them have proved successful in schools, universities and in further education.

Gerhard de Haan, a professor at the Free University in Berlin, says the greatest range of learning opportunities is in adult education. He stresses the importance of grant programs, such as the one run by the Humboldt Foundation to encourage young researchers from developing and emerging nations to spend a year working on climate and energy projects at German universities.

“Such approaches are particularly effective because they are aimed at disseminators and come at it from an economic angle,” de Haan said. “Foundations, companies and governments ought to offer many more grant programs.”

Udo Kuckartz says there are already some signs that that is the way things are going.

“There has been a lot of progress, often from large companies,” he said.

But it is not only private enterprises that are seizing the initiative. Sometimes, as in the case of Denmark which staged the UN climate conference at the end of last year, governments offer grants to encourage foreign students to come to their country and learn about wind power or environmental engineering or chemistry.

Over the past decade, Kuckartz says, there's been a huge increase in the number of environment related courses. Most, however, focus on climate and energy issues.

“They are almost always scientific or environmental management programs,” he said, adding that there are few which look at the issues from a sociological point of view.

Two exceptions are a program about environment and education, at the Rostock University in eastern Germany, and another at Berlin's Freie University, which looks at research in the future.

Gerhard de Haan believes schools could and should be doing more to enhance a general level of understanding of the issues surrounding climate change among children. He points out that climate change is usually addressed only in geography classes in Germany but says that it is actually “increasingly being marginalized.”

And in subjects such as biology, politics or social studies, teachers are by no means obliged to include climate issues and sustainability in the curriculum. That partly has to do with Germany's federal structure in which each of the 16 states determine the content of the education they offer. But that's not the only reason. Experts say teachers themselves are not taught enough about climate issues during their own training.

In some places, there are regional initiatives which promote climate education in school and therefore try to get teachers up to speed. A group of charities has teamed up with the German government to launch a further education program for teachers from the states of Hesse, Saarland and Rhineland-Palatinate. But such schemes, which are often backed by UNESCO, are rare.

“They only reach a maximum of five percent of schools,” Kuckartz said.

US the model for climate reporting

The shortcomings on addressing climate change aren't just confined to the classrooms. The media too are to blame. Experts say journalists - the main conduits for climate information reaching the masses – could also do with greater training in environmental issues.

Unlike America, there are few universities and journalism schools in Europe that offer courses on climate reporting. Across the Atlantic, the picture is altogether more rounded; there are already a number of environmental journalism programs on offer, and the Society of Environmental Journalists (SEJ) is constantly working towards improving the standard of reporting on the subject.

That said, things are slowly improving in Europe too. Programs such as Deutsche Welle's annual Global Media Forum in Bonn is the largest European event of its kind. Its aim is to help journalists deepen their knowledge and sharpen their skills on issues surrounding global climate change.

Though much is known about climate change, efforts to fight it remain patchy. One reason for it is psychological - climate change contradicts the way we perceive and tackle problems. (17.08.2010)