Controversy is her middle name, but Nyanzi refuses to shy away from confronting some of the most feared politicians in Uganda with her unorthodox wit. 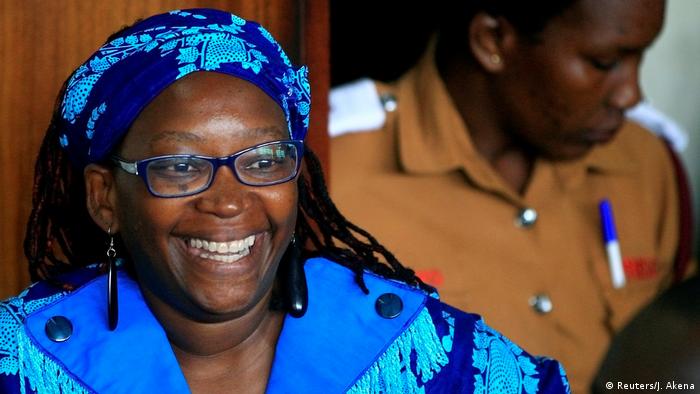 Stella Nyanzi is a well-known figure in Uganda, maintaining a popular Facebook presence where her supporters frequently applaud her activism and strong stance against what she perceives to be examples of injustice. The 42 year old academic and campaigner is one of the most followed Ugandans on social media.

But now she is facing a complex, drawn-out trial for insulting the President of Uganda, Yoweri Kaguta Museveni by comparing him to "a pair of buttocks."

After 33 days in jail, Nyanzi was released on bail on May 10. A week later she was back in court – this time to attend a hearing for a group of her students who were arrested after they demonstrated against her arrest.

She will report back to court on 25th May to continue the court case.

Nyanzi had also previously promised to have sex with the president - in her usual tongue-in-cheek manner - if he were to resign from his position while also praising his three-time presidential opponent Kizza Besigye's political strength while referring to his "unimaginable" sexual prowess.

Nyanzi is outspoken in her opposition to President Museveni's 31 year rule. But one of the main reasons her Facebook posts always attract hundreds of responses is because she frequently uses sexual innuendo to deliver her message.

Although many Ugandans consider her to be eccentric, most were caught off guard when she decided to strip down to her knickers during a demonstration after she was barred from her office at the Makerere University Institute of Social Research.

The Head of the Institute Professor Mahmood Mamdani claimed Nyanzi had not fulfilled her contractual obligation of teaching students.

After showing up for work only to find a padlock on her office door, Nyanzi also decided to lock the main entrance to the campus before stripping down and telling reporters, "the police only protects Mamdani. I will protect myself with my nudity and I will remove the knickers as well if the police does not leave me alone.”

The office was given back to her after the univeristy's vice chancellor intervened. 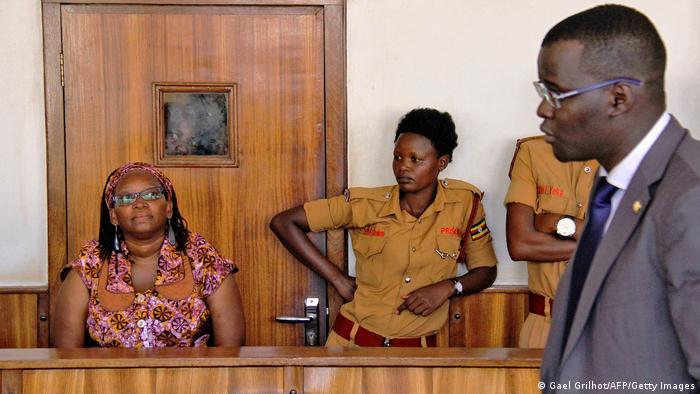 Stella Nyanzi has remained steadfast in her views throughout her trial

Many people find that Nyanzi's way of promoting her message borders on the inappropriate. Ugandans often use sexual innuendos in everyday conversation, but a number of people are beginning to feel that her emphasis on this form of communication crosses the line.

But Professor Mwambutsya Ndebesa who has worked with Nyanzi at Makerere University for over 5 years told DW the activist has created her own niche.

"I think society has not come to terms with that discipline, and they have not understood her so she is trying to also look for space within this socially conservative society,” Mwambutsya said.

He also believes that challenging orthodoxy almost always results in push back from the authorities.

"Maybe that is what the academics are supposed to do, but when you challenge orthodoxy in established governments you expect consequences, and this is what is happening to Stella Nyanzi, he said.

Professor Ogenga Latigo, a former researcher at Makerere University and the former Ugandan Leader of Opposition told DW that although he considers Nyanzi a brilliant academic, it also comes with difficulties.

"The challenge with brilliance is that sometimes you're on the edge, you cease to be normal. There are things she sees that normal people don't see in terms of how to convey messages,” he said.

"Immediately after she did what she did she went to jail, but the whole world got the message and that's the essence of her brilliance.”

"The thing with Stella is that she does not fear for herself, she will find it easier to die than to keep quiet with an idea that's bothering her mind. So for anybody who thinks that you can just keep her in jail, you are wasting your time”

Throughout Nyanzi's trail, her following has grown even larger. Various people from different spheres of society regularly attend her court sessions, from local politicians to ordinary citizens.

One student at Kololo High School – who shares Nyanzi's name but is not related to her – says she used to refer to herself as Nyanzi Stella Shantal. "When the Makerere head started stirring up controversy and many people were talking about her I also re-arranged my name to Stella Nyanzi," she told DW.

"Now I get like 20 friend requests a day, people think I am her. It felt good but now I have decided to change back to Shantal Nyanzi."

Nyanzi may be known for her acidic tongue, but her sister Shelia Nyanzi insists that "inside the tough talking academic lies a kind and caring mother."

As a mother of twins, Nyanzi is also traditionally referred to as Nalongo – or one who births twins. In the central Ugandan ethnic group of Buganda, these women are treated with respect and are allowed to use obscene language to express themselves.

"She is our pillar. She is an inspiration to her siblings and her children and she will never let a wrong go uncorrected,” said Shelia.