Japan's prime minister Shinzo Abe will delay a controversial increase in sales tax due to concerns for the country's fragile economy. The move is a blow to his economic policy aimed at boosting growth and inflation. 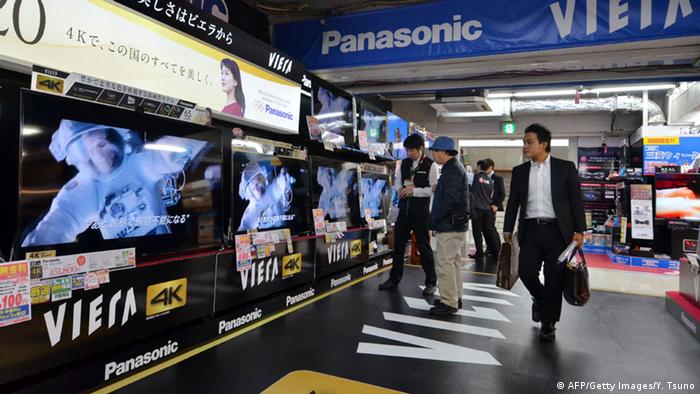 Shinzo Abe announced his decision to members of the ruling Liberal Democratic Party (LDP) in televised remarks on Wednesday, saying the sales tax increase would be pushed back to late 2019.

"I want to fulfill my responsibility by accelerating Abenomics more and more. [Therefore], I have made a decision to postpone the rise in the consumption by two and a half years," he told LDP lawmakers, adding that he hoped to "rev up" Japan's sluggish growth by then.

In the first quarter, Japan scraped by a recession, growing 0.4 percent after contracting in the final three months of 2015. His plan to increase the sales tax from currently 8 percent to 10 percent in 2017 caused concerns for Japan's slow consumer spending to weaken further. A first VAT hike from 5 percent to 8 percent in 2014 is widely blamed for dipping the world's third largest economy back into recession.

Shinzo Abe swept to power in 2012 on a pledge to kickstart growth with an economic policy blitz - known as Abenomics - based on ultra-lose monetary policy, higher government spending and economic reforms.

The policy appeared to bear fruit in his first years in office as it sharply weakened the yen, giving Japan's exporters an edge over foreign rivals. But the promised labor and administrative reforms have been slow in coming.

Masamichi Adachi, senior economist at JPMorgan in Tokyo told the news agency AFP that Abe's VAT delay raised questions about the policy and that it was "hard to say if Abenomics has been successful."

Meanwhile, economists have warned against delaying the tax rise because it was essential for paying down Japan's staggering national debt - currently standing at about 229 percent of gross domestic product (GDP).

Much of the debt is held domestically at extremely low interest rates which have so far allowed the country to avoid a Greek-style crisis.

But there are fears that a loss of confidence in Tokyo's ability to pay could send interest rates soaring and, in the worst case scenario, raise the possibility of bankruptcy.

Hiroshi Shiraishi, senior economist at BNP Paribas Securities, said he had a "very strong concern" about the government's fiscal discipline. "We are stepping onto a potentially dangerous path because once you start this policy it is difficult to stop, and once you do, the economy will tank," he told the news agency Reuters.

There are not a few economists who worry Abe is leading the country toward a sovereign ratings downgrade because of another huge budget shortfall next year as a result of the postponed sales tax hike.

Japanese PM Shinzo Abe may delay an increase in sales tax, fearing it would further trouble the struggling economy. New figures show that consumer prices in Japan have slipped for the second straight month. (27.05.2016)

Global economic woes and China's claims to the South China Sea have set the tone at the G7 summit in Japan. Overshadowing the annual event is a planned visit to Hiroshima by US President Barack Obama. (26.05.2016)