Chevron has won a key challenge against a multi-billion-dollar judgment over polluting the Ecuadorian Amazon with toxic oil waste. But the case is far from over - a challenge is still pending in Canada. 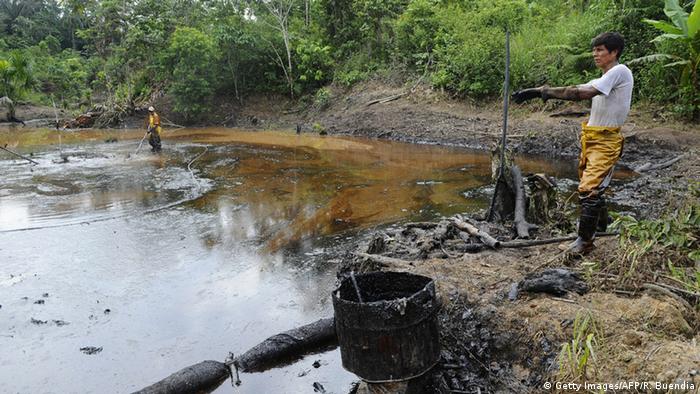 A US appeals court on Monday (08.08.2016) blocked enforcement of an $8.6 billion (7.8 billion euro) judgment against Chevron over oil pollution in Ecuador's Amazon rainforest.

In New York, a three-judge panel of the 2nd US Circuit Court of Appeals upheld a 2014 decision which determined that a ruling ordering damages in Ecuador was based on corrupt conduct.

"This decision … leaves no doubt that the Ecuadorian judgment against Chevron is the illegitimate and unenforceable product of misconduct," Chevron general counsel R. Hewitt Pate said in a statement.

Deepak Gupta, representing US attorney Steven Donziger - who was accused of fraud in representing indigenous groups - countered that the appeals court decision "hands well-heeled corporations a template for avoiding legal accountability anywhere in the world."

Gupta said they would be exploring options for review of the case in the US.

The Ecuador Supreme Court had ruled in 2011 that Chevron owed $9.5 billion (equivalent at the time) in compensation for dumping more than 18 billion gallons (68 billion liters) of oil and toxic waste in the Ecuadorian Amazonia region, where the company operated for 25 years.

Since Chevron, the fourth-largest oil company in the world, doesn't hold any assets in Ecuador, plaintiffs have sought to enforce the judgment by going after Chevron's assets around the world - including in Canada, Brazil and Argentina.

Ecuadorian villagers are still seeking to enforce the judgment in Canada's Supreme Court.

"We are going to pursue Chevron's assets in Canada and in the pertinent courts, until the last cent of the award is paid," said Pablo Fajardo, an Ecuadorian attorney working on the case, at a news conference in Quito last September.

Plaintiffs succeeded in arguing that since Chevron owns an estimated $15 billion in assets in Canada - including offshore oil fields, a tar sands investment and a refinery - they could pursue the case there. The ruling, however, doesn't mean that villagers can seize Chevron's properties in Canada.

When will the 22-year trial end?

In July 2015, multinational Chevron Corporation challenged the 2012 decision of the Ecuadorian Supreme Court, claiming its penalty of $9.5 billion should be nullified.

For Maria Garces, from the Union of People Affected by the Operations of Texaco (UDAPT in Spanish), the amount of money is insignificant compared to the disaster.

"This was not an accident; it was a crime against nature and the indigenous population," Garces told DW. "They wanted to delay the process until we get exhausted - but we are far from giving up." 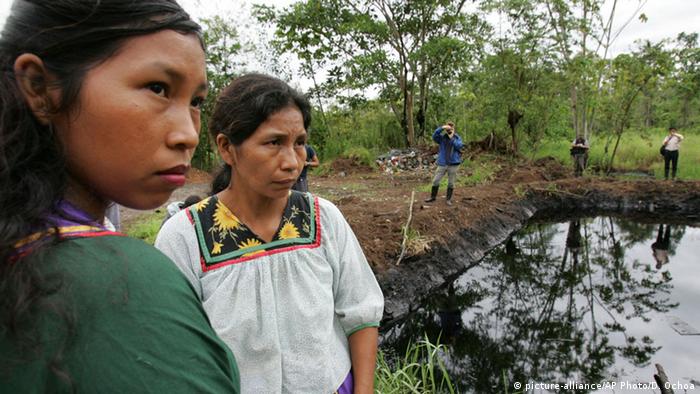 More than 30,000 indigenous in Ecuador's Amazonia have been affected by the oil extraction pollution

Often referred to as "the trial of the century," critics say this environmental-legal scandal has exposed Chevron as abusing legal systems to extend the process for decades. For its part, the company refuses to surrender in the battle it calls "the legal fraud of the century." The process has been plagued by rumors of bribery and threats from both sides.

Yet the primary problem remains unsolved: no one has yet taken responsibility for the devastation of land, contamination of water, many human illnesses and deaths, poisoned animals and displaced and killed indigenous tribes. Around 50,000 square kilometers (19,305 square miles) in the Lago Agrio region have been affected by the dumping of oil and toxic waste.

In 1993, residents of the Ecuadorian Amazon sued Texaco - acquired by Chevron in 2001 - accusing the company of the dumping of around 80,000 tons of oil and toxic residues on their land between 1964 and 1990 during operations in the Lago Agrio region of northeastern Ecuador. 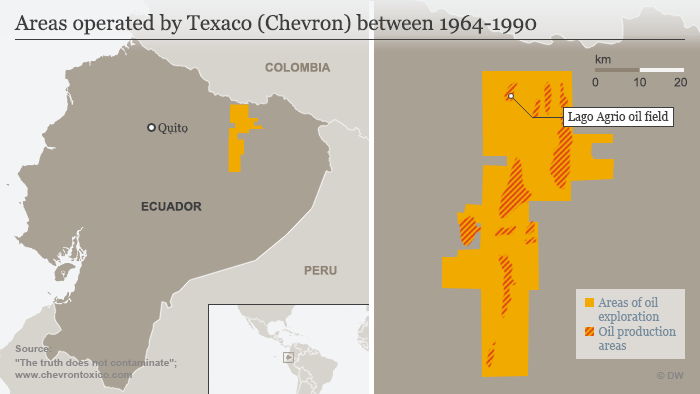 The dumping led to significantly increased rates of cancer, miscarriages and other health problems among the population close to the area. The contamination also had devastating effects on the biodiversity and economy of the inhabitants, who lived off agriculture and fishing.

The company denied responsibility, arguing that the area was cleaned up after it pulled out of Ecuador in 1992. But according to locals, the company just covered the surface of the oil pools and toxic waste pits with dirt. Those topxics later made their way into the water supply.

Pablo Fajardo, an Ecuadorian lawyer who was raised in the area and the person who took the case to the international courts, has become the voice of more than 30,000 indigenous residents.

"There is no need to argue," Fajardo told DW. "The evidence lays on the ground, clearly visible to everybody: old Texaco barrels stuck in hundreds of oil pools that did not have proper sealing, releasing all kind of dangerous substances," the lawyer said.

The case was famously documented in the 2009 film "Crude." 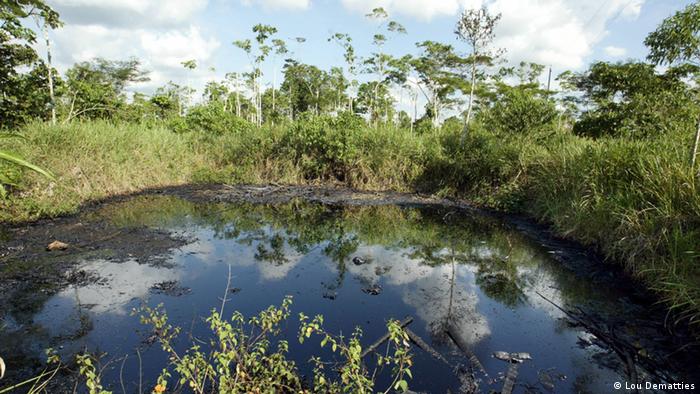 Chevron continues to stand by its assertion that the Ecuadorian judgment is fraudulent and unenforceable.

According to the 2014 ruling in US District Court for New York, lawyers for the Ecuadorian groups committed corruption including bribery, ghost-writing the original judgment, and submitting fraudulent evidence.

The multinational corporation denies any liability. According to information from the company, Texaco invested $40 million in remediating the areas affected by its operations. In 1998, the Ecuadorian government apparently released the company of any further responsibility.

This has been strongly questioned by the plaintiffs, who allege that Chevron paid off the government at that time.

In 2011, a Lago Agrio court ruled that Chevron owes $19 billion - halved in 2012 by the Ecuador Supreme Court to $9.5 billion - for the pollution caused by Texaco operations in the region.

In "The Amazon Post" - the official blog of Chevron that expresses the company's opinion about the case in Ecuador - Chevron presents various pieces of apparent evidence and inconsistencies, portraying the plaintiffs as gold-diggers.

The Ecuadorian government has not done enough on the case, said Patricio Chavez, an environmental leader and spokesperson of Yasunidos, a nongovernmental organization that seeks environment protection of Yasuni National Park in Ecuador.

"Ecuador's president launched a media strategy to bring the world's attention to the disaster in Amazonas - but this has been confused with a political campaign, and Chevron took advantage of it to delegitimize the claim of the people," he told DW.

The Yasuni rainforest of some 9,800 square kilometers (6,500 square miles) is located in the Ecuadorian Amazon. The park was declared a biosphere reserve by UNESCO in 1989, and is home to two nomadic indigenous groups living in voluntary isolation.

The area contains oil reserves valued at $7 billion, and environmental groups and the government have been dispute for years over exploitation of oil reserves there. 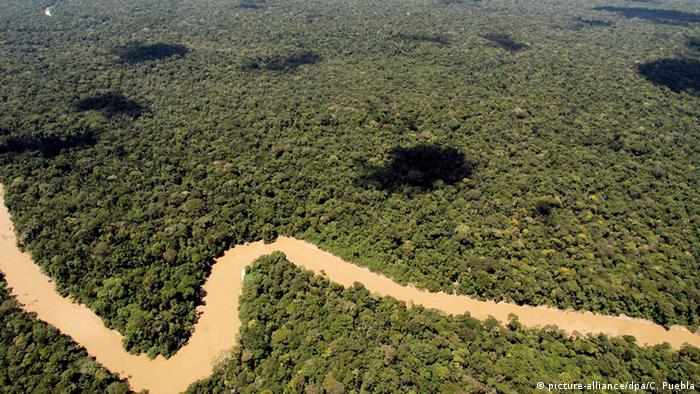 Yasuni National Park: One hectare there holds more biodiversity than all of North America

In a famed and controversial move, in 2014 Ecuadorian president Rafael Correa offered to ban exploitation of Yasuni oil fields if international donors would contribute at least half of its oil value in international aid.

That effort did not succeed.

Correa then approved a license for Petroamazonas to operate in the region. Oil exploration is underway there, and operations are slated to begin in 2016.

Chavez pointed out how oil extraction is always risky for the environment. "It doesn't matter how careful they pretend to be - not even the cutting-edge technology used by the British Petroleum could stop opportunely the spill of oil in the Gulf of Mexico," Chavez said.

Plaintiffs in the Chevron case believe that the case must go on.

Walter Trujillo, an Ecuadorian activist based in Germany, told DW: "It must happen. There is no chance to keep waiting. People who are getting ill and dying must see justice while they are still on this planet." 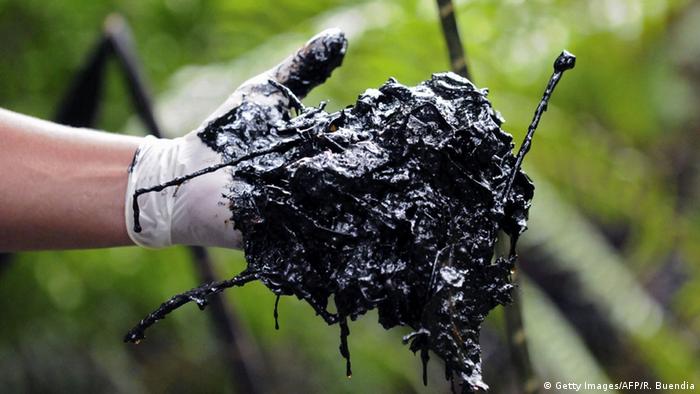 Fajardo, who has spent almost two decades on the legal battle, said that no amount of money can pay for the species and ancient cultures that have already disappeared. For him, the sanction would make a good start for the long - and expensive - restoration work.

Ecological restoration is anticipated to take more than 20 years.

Since the last Olympic Games in 2012, 150 indigenous activists have been killed in Brazil while trying to protect their land. Campaigners warn the new interim government is moving to erode indigenous protections further. (04.08.2016)

Cleaning up the Ogoniland

In Nigeria's Ogoniland, which has long been synonymous with pollution at the hands of Shell, an UNEP program is poised to help clean up. But the locals want faster help for themselves and their families. (23.06.2016)