A riesling fit for Donald Trump | Business| Economy and finance news from a German perspective | DW | 18.11.2016

A riesling fit for Donald Trump

Worldwide demand for German white wine has seen strong growth. Connoisseurs from the US are paying ever higher prices for riesling from the Rhine and Mosel areas - thanks to a focus on quality and tradition. 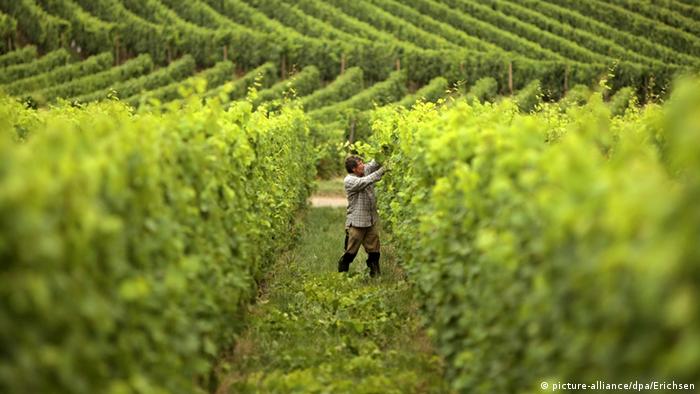 It's a place that could hardly be more picturesque: the winemaking village of Assmannshausen, west of Frankfurt. The banks of the Rhine are covered in fog. Vineyards extend left and right.

White riesling wine makes its way from here to the finest restaurants in the world. August Kesseler's vineyard produces rieslings that are served at Tantris in Munich, with two Michelin stars, and celebrity chef Heston Blumenthal's Fat Duck near London, one of only four restaurants in the country with three stars.

Enologist Simon Batarseh is a member of August Kesseler's management. He stresses how important it was to focus early on the export market. Some 40 percent of the company's wines are now sold abroad.

The US is a key market. "The wines sell from Florida to Texas," Bartaseh said.

He even has a riesling tip for President-elect Donald Trump: "I recommend the 2013 Rüdesheim Berg Schlossberg, because it's a bit more mature and stimulates thought and in-depth discussion."

Bartaseh is a classic career changer. He comes from northern Germany, where the regional drink is beer, but then he discovered his passion for wine and studied viticulture and enology at the internationally renowned university in Geisenheim.

The curriculum also includes the economic aspects of viticulture, and Geisenheim is the alma mater of many well-known riesling producers. "Riesling is trendy," Bartaseh said, enthusing about the "immense richness" of the wine.

Assmannshausen is part of the Rheingau, one of Germany's best-known but smallest wine-growing regions. Its entire wine-growing area is about 30 square kilometers (7500 acres), 78 percent of which is used to grow riesling grapes.

The variety has undergone something of a renaissance. "Around 150 years ago, riesling was the most expensive wine in the world," said Hans-Peter Seyffardt, president of the Rheingau winegrowing association.

German Riesling -- one of the world's great wines

Riesling was once among the most expensive wines. Later, wineries focused on quantity, and quality suffered. But in recent years, the pendulum has been swinging back - a boon to Germany's Rheingau Region. (23.10.2014)

What Trump's vodka has to do with his presidency

Most of the talk about Donald Trump has been about his antics during the election campaign. But what about Trump the businessman? DW talks to Wall Street reporter Max Abelson who spent time with the president-elect. (18.11.2016)

That's no longer true today, as riesling is comparatively cheap, he said, even though "we're able to achieve a quality today that was not possible back then."

Viticulture in the region was mentioned for the first time In the 12th century. "We're working areas where wine has been growing for many hundreds of years," Seyffardt said.

Many of the 450 wineries in the Rheingau are family businesses. International success means there are no problems finding people to carry on the business.

"My daughter has joined my company," Seyffardt said proudly. "She is 26 years old and studied in Geisenheim, and did internships in Burgundy and South Africa."

Even so, Seyffardt said it was a pleasant surprise that many young people are becoming interested in winegrowing.

"Today, wine is a part of the zeitgeist," he said. "Consumers think of wine as organic, because we work with nature and treat the environment with care."

The winegrowers see protecting the environment as part of their job. In winter, they do not work the soil but leave it fallow. And water consumption is monitored carefully throughout the year.

On this November day the wind and rain rage through the vineyards. It's a reminder that this has been a difficult year for wine. First there were early frosts, then hail, then an extremely wet July. Finally, a warm September and October brightened the vintners' faces.

Wilhelm Weil, who runs his family's Robert Weil Winery, and serves as president of the Association of German Prädikat Wine Estates in the Rheingau, speaks of the autumn's "picture-perfect weather." Around 5 percent of his grapes are still on the vine.

He's looking forward to making Beerenauslese - fine late harvest wines - and sweet ice wines. The late-maturing grapes freeze on the vine when the temperature drops to minus 7 degrees Celsius. The sweet wines are a rare riesling specialty and are served in small quantities with dessert.

"The interplay of sweetness and sourness is what makes these wines so unique," Weil said. His wines have won many awards and are among the most expensive rieslings on the market.

A bottle of his Grosse Gewächs 2015, comparable to a Premier Cru, starts at 44 euros ($47) . With great passion Weil describes the special characteristics of the German riesling using words like "slate aroma" and "minerality."

"We are the clear winners of global warming" Weil said. "The standard of quality in German winegrowing is now as high as it has ever been."

But it has often been a rocky road to get there. When winemaker Ernst Loosen took over his parents' estate in the nearby Moselle, it produced tasty but generic wines with little character, not great rieslings. Exports were insignificant. Loosen worked hard on riesling production, eliminated mineral fertilizers and increased quality step-by-step.

A few years ago, Loosen was named "Riesling Man of the Year" by the renowned trade journal Decanter. Today, 90 percent of his wines are exported, at average prices of 35 - 60 euros per bottle. "German riesling is highly praised internationally," he said confidently.

His Dr. Loosen vineyard concentrates heavily on the US market as well as Asia, where he says not only dry rieslings sell, but also the noble sweet wines from the slopes of the Moselle.

"I have just come back from Malaysia," he said. "There, a business partner and I ate pork ribs with freshly chopped chili salad. There can be nothing better for this dish than our sweet rieslings."

Autumn is the harvest season in Germany’s 13 different wine regions. Take a trip into the world of Riesling, Müller Thurgau, Silvaner and co. (08.10.2015)