A heavy metal soundtrack to war: 'Scream for me, Sarajevo'

War knows no normality. During the siege of Sarajevo, there was no electricity to plug in amps: no guitar, no band practice. Yet heavy metal fans didn't let that stop them. A documentary focuses on that point in history. 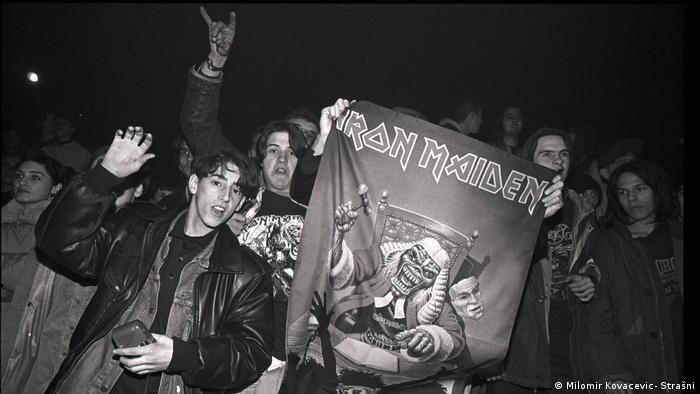 It was a cold December day in 1994. The plane from Birmingham landed in Split, Croatia. According to plan, the international stars were to be flown to besieged Sarajevo with UN helicopters, play a concert and get out again.

But things didn't quite work that smoothly. Eight or nine hours went by without them moving from the airport. "A Royal Air Force official showed us a map of Bosnia and Herzegovina and explained what was really going on. The extent of the war was unimaginable," recalls Bruce Dickinson, singer of the legendary heavy metal band Iron Maiden, on a solo tour and then among the passengers.

Should they leave without doing the concert? No way. But no one knew when they would get moving.

Finally, a couple of bright yellow trucks decorated with the cartoon character Road Runner parked in front of the airport. They were drivers from The Serious Road Trip, a humanitarian organization dedicated to bringing entertainment to people in crisis zones.

The musicians could travel with them to Sarajevo. No one was provided a protective vest or a helmet as they drove through the war zone. "We were only allowed to pee in the middle of the street, not on the side. There were mines everywhere," remembers bassist Chris Dale. After a several-hour drive, they finally reached war-torn Sarajevo.

Read more: Growing up and staying sane under mortar fire 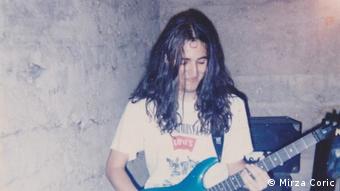 Heavy metal, the rhythm of a generation

"During war, music meant — to me — resolution, an escape from reality and hope. We all dreamed of how we would one day make our own music, maybe even become famous with it. Music gave us courage. And during the bombing raids, we would practice our songs in the basement," Mirza Coric told DW.

The guitar was a symbol of life's rhythms then — and continues to be today. It was just that back then, it wasn't often in use. "Imagine you have an electric guitar and the only thing that you want to do is play but there's no electricity. When we had it, though, all I did was play, the whole time."

Mirza Coric and other music fans who were living in Sarajevo during the siege are the focus of a new documentary film by Bosnian director Tarik Hodzic. "Scream for me, Sarajevo" is in German theaters and in the UK starting April 17.

"Even though there was a media blockade during the war, a few radio broadcasters, like Radio ZID, put in a lot of effort to get access to current music. Fans used to use their electricity ration of two hours a day to record the MTV show, 'Headbangers Ball.' They used every humanitarian path to get CDs, cassettes and new records, which were listened to, copied and passed on to others," said Hodzic.

The legendary Bruce Dickinson concert during the war

"Bruce Dickinson of Iron Maiden at 6 p.m. in the Bosnian Culture Center": that was the text printed on the few posters advertising the concert. Very few people knew about it. It was never advertised on the radio, as it was too dangerous. The enemy could learn about the concert that way. "One grenade, one sniper and it would have been all over with," Martin Morris remembers in the film. He was a UN employee in Sarajevo and the concert's initiator. 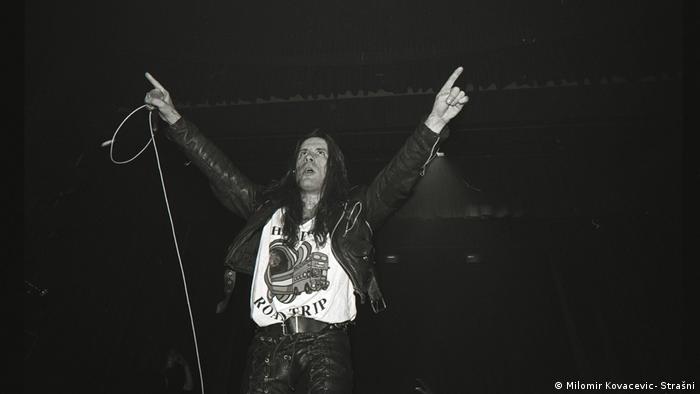 Bruce Dickinson of Iron Maiden on stage in Sarajevo in 1994

The situation was dangerous and risks ran high. But everyone had decided that the show must go on, said Morris. In spite of the insecurity.

"None of us had ever really believed that he would play in Sarajevo. How could one of the greatest heavy metal stars come to this hellhole?" Mirza Coric had asked himself.

But he did come. From a small stage, Dickinson got the audience heated up; there was singing, drinking, laughing. Someone turned a solitary spotlight on and off to create lighting effects like you might see at your average concert. For four hours, there was peace. Four hours without hand grenades. Four hours of utter happiness — and electricity. "That night was like in a dream," Mirza Coric told DW in an interview. The concert gave most of the fans increased energy to carry on with their music. Coric's band even produced an album during the war.

"Even today, only a few hundred people know this concert took place — just those who were there and their closest friends," said Tarik Hodzic. The UN employee Martin Morris was able to find an original recording of the concert after a long search through his attic. That sparked the idea for the film.

"Scream for me, Sarajevo," shows both the brutality of the war and the absolute normality of life in the resistance and their hope. 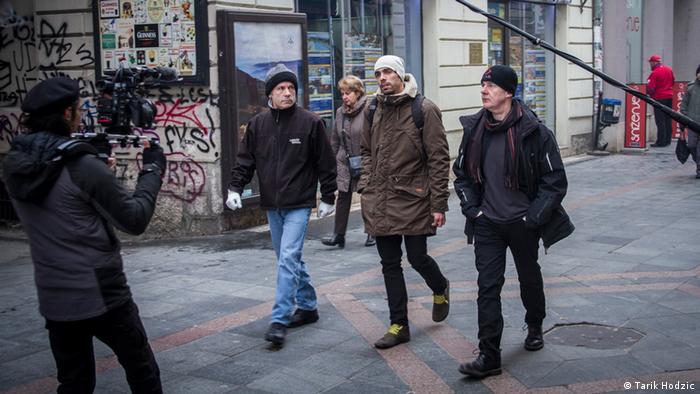 Bruce Dickinson (left) during the filming of "Scream for me, Sarajevo"

Not all directors had such great luck in Bosnia and Herzegovina, said Tarik Hodzic. The working conditions in the country have made creative productions nearly impossible.

"'Scream for me, Sarajevo,' is the first film that was able to get its legs under a professional framework. For artists, or in my case, filmmakers, each movie is a test of strength. My colleagues have phenomenal ideas that often end up in desk drawers. We live in a complicated country — one with many problems. In the Federation of Bosnia and Herzegovina, there is government funding for art but each year, the sum gets smaller and smaller. You couldn't even finance a film with such a small stipend, yet everyone is applying for this money," said Hodzic.

It was via funding from abroad that Hodzic and producer Adnan Cuhara were able to produce their film. With it, their dreams were fulfilled — not only were they able to film the movie, but they were able to meet their musical idol, Bruce Dickinson, while doing so.

The UN Hague tribunal sentenced Radovan Karadzic to 40 years in jail for genocide and other war crimes in Bosnia and Herzegovina. The ex-leader of Bosnian Serbs has gone a long way from writing poetry in Sarajevo. (23.03.2016)

While many of his contemporaries have fallen by the wayside, the once hard-living pioneer of gory rock theatrics and catchy heavy metal anthems is one of music's great survivors. (03.02.2018)