A green oasis in the land of the pharaohs

Cairo's Al-Azhar Park is still going strong and changing its neighborhood for the better 12 years after it was first opened. Built on a rubbish heap, the park gives the crowded city some much-needed room to breathe. 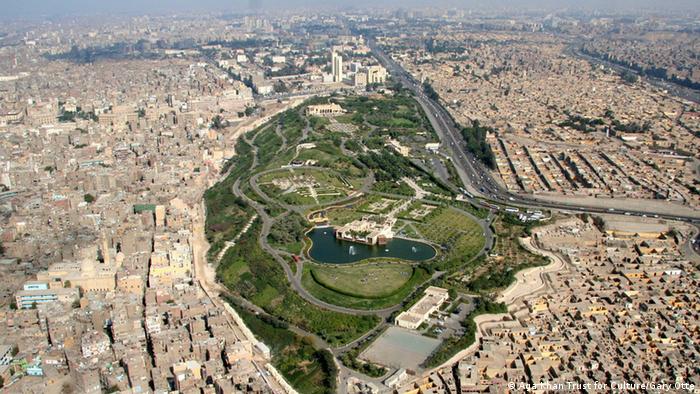 Hugging the banks of the Nile River, Cairo was known for centuries as a city of gardens. But recent unrelenting migration to the metropolis made the need for housing a priority and by the 1980s nearly all of the city's parks had disappeared; now primarily only small neighborhood parks available to the elite remain.

Today, the capital is Africa's largest city. According to Reuters, greater Cairo is home to nearly 23 million people and is set to absorb another 500,000 by the end of the year - more than any other city in the world. The sprawling metropole is home to a quarter of the whole nation's population, which is leading to intolerable conditions all over the city.

Slums full of ramshackle buildings lacking running water and sanitation dot the city and are home to about 850,000 people. The government has said that around 350 of these slums are unsafe - all the more important to have room to breath.

The Aga Khan saw this as a challenge and went to work to create a "green lung" for the city. For obvious reasons finding adequate space was not easy. But through the Aga Khan Trust for Culture a suitable location was found: a 33-hectare (81-acre) 500-year-old trash and debris dump. Though the site was near the historic Old City, the adjacent low-income neighborhood of Darb al-Ahmar was one of Cairo's poorest and most troubled areas. 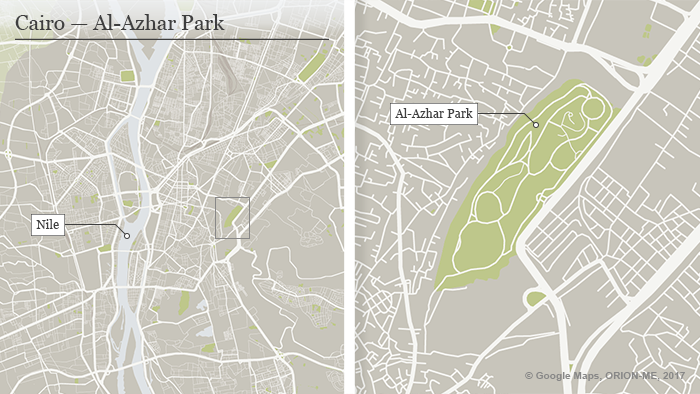 To turn the trash heap into a green space required the removal of 80,000 truckloads of fill and smoldering waste. In the process three enormous fresh water reservoir tanks needed to be hidden within the landscape and historically important centuries-old buildings and architectural elements were uncovered and painstakingly restored.

Attractions like promenades, fountains, a restaurant and an artificial lake were created. And finally to give the park with its traditional Islamic landscape life, 650,000 plants were planted. 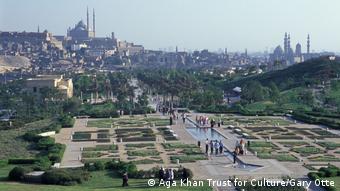 A view from the park of Cairo's Old City

After nearly 20 years of hard labor the park was completed in 2004 and officially inaugurated a year later.

The $30 million (25.5 million euro) needed to create the park was a personal gift from the Aga Khan to the people of Cairo to commemorate his ancestors, the Fatimid Califs. He donated another $8 million for the restoration of a number of monuments in the area.

Though sometimes criticized, the project leaders thought it was important that visitors understand that the park is something of value. For this reason there is a small entrance fee. And today, admission to the park from the nearly two million visitors and restaurant receipts cover maintenance costs.

But even those who do not go into the park have benefited from it and not only through better air. The community has profited from the restoration of a number of surrounding buildings and schools, the removal of mountains of trash and better sanitation and waste management.

Where few others dare to tread: the Aga Khan in Africa

Prince Karim will celebrate his diamond jubilee as the Aga Khan this July. From the beginning of his time as Imam, he has been quietly supporting humanitarian and environmental work throughout Africa. (07.07.2017)

The construction of the park gave jobs to locals, and additional programs were created to help the local community in the Darb al-Ahmar neighborhood in the long term. Job training, healthcare facilities, apprenticeships and micro-credit loans to help local shops were all part of the comprehensive concept.

Ultimately the holistic approach to the park and its community has proven itself a stimulus for urban renewal - most importantly without displacing old residents.

The Al-Azhar Park has been a model for a number of recent projects in other parts of the world: the Parc national du Mali in Bamako, the Forodani Park in Zanzibar and the Garden of Babur in Kabul.

The Aga Khan Trust for Culture is now midway through an agreement to manage the property for 25 years, and there are some concerns that when it's turned over to the local government it will underfund the project and the park may lose some of its lustre. But hopefully the regional authorities see how important green spaces are and will continue to back the project.

The impulse behind the initiative

The Aga Khan Development Network (AKDN) has been working on development projects around the globe for over half a century. Today, it is an umbrella organization of 10 separate private for and non-profit institutions and is headed by Prince Karim, the Aga Khan, spiritual leader of the Ismaili Muslims

The organization employs 80,000 people worldwide, of which 36,000 are in Africa, where it is active in 13 countries. In 2017, the group and its partners plan to spend $925 million on various projects ranging from education, culture and infrastructure to healthcare and the living conditions of the poor.

In the next months we will highlight some of the Aga Khan Development Network's African projects.

On this week's Eco Africa, we check out Nairobi's efforts to turn dump sites into green spaces, a cute streaming service called Bearflix and a DJ mixing beats with bee humming to raise awareness about the environment.

On this week's Eco Africa, we check out solar-powered irrigation in Rwanda, flip-flops make of algae and how churches in Ethiopia are helping protect forests.