Interest in houseboats has noticeably increased — partly because there is now plenty of comfort on board. In coronavirus times, many see it as a great vacation choice. 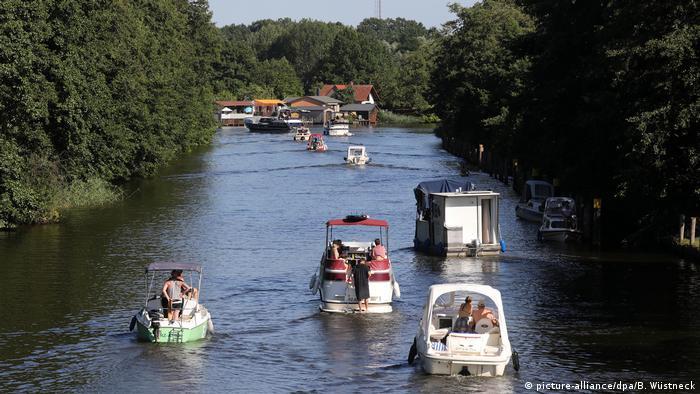 About 30 boats are gently bobbing in Tempelhof Harbor on the outskirts of Berlin. There is a range of smaller sailboats and larger yachts, and, in between, Peter Ströhlein's "Sirius" – a brand-new houseboat fresh from the shipyard.

Soon it will be rented out to vacationers because Ströhlein runs a houseboat rental business. But before that, he wants to test whether everything is running as it should on the vessel. So he's taking the Sirius out on the city's waters today for a test ride. 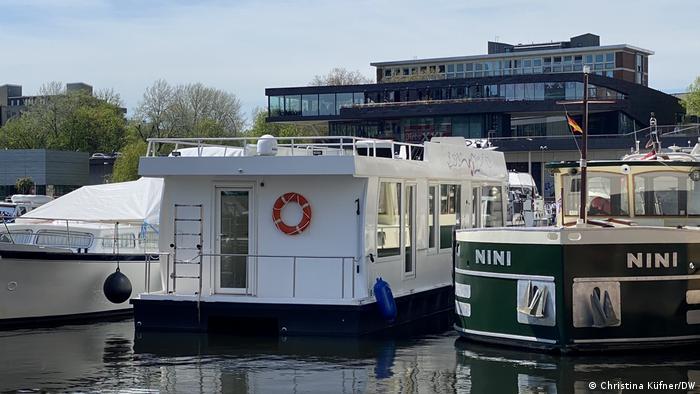 Angular but with a lot of comfort, the Sirius (C.) sits moored in Tempelhof harbor in Berlin

Ströhlein unties the mooring ropes, starts the engine and slowly steers the boat out of the harbor basin, straight into a tree-lined canal. "Houseboating is actually quite simple," he explains as he juggles the steering wheel. A two-hour session on how to operate the boat, and his customers are already allowed on the water. The maximum speed of the Sirius is 8 kilometers per hour (5 mph), which is pretty manageable.

The chugging sound of the engine and the gentle lapping of the water ensure that a feeling of calm quickly sets in. The landscape, the houses, the people on the banks — it all gently glides past. "The perfect way to slow life down," says Ströhlein. A good place to enjoy this is the foredeck, which doesn't have a pointed shape like other boats but looks more like a wide veranda. With a view directly onto the water, it's a great place to relax. Even better is the panorama from the top of the large sundeck — a 360-degree view of the surroundings. 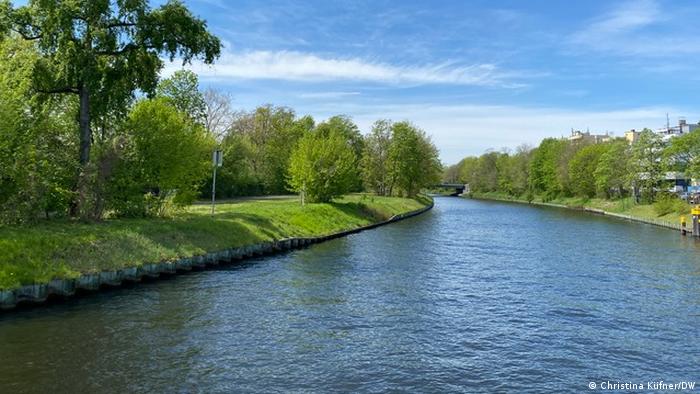 Especially in the early season, when there is hardly shipping traffic on the Berlin canal, a houseboat can maneuver with ease

The fact that a houseboat offers significantly more space than many other recreational vessels makes traveling on one quite relaxed. The Sirius, for example, has two bedrooms, two toilets, a shower and a fully equipped kitchen with a seating area. In recent years, the degree of comfort on houseboats has changed a lot, says Ströhlein. "In the past, they were mostly just wooden shacks nailed together." These still exist — but there are also houseboats that offer a certain amount of luxury. In the case of the Sirius, this level of comfort is available for around €2,600 ($3,160) per week.

Pandemic leads to increase in demand 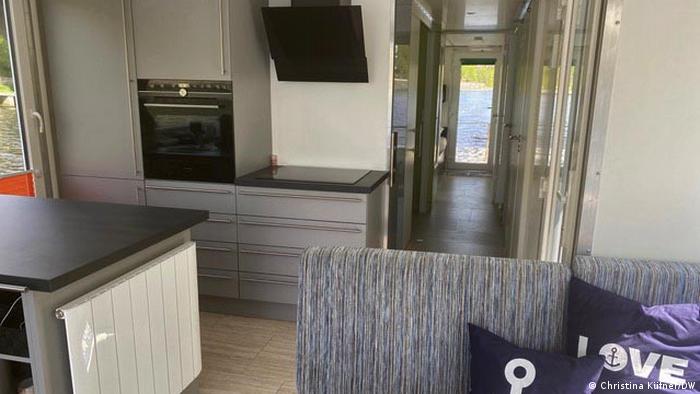 Satisfies even the most demanding standards — a luxury houseboat

Interest in this kind of vacation is now enormous. The season runs from April to October, but Ströhlein's houseboats are already fully booked. He always had a lot of inquiries, but the coronavirus pandemic has boosted business even more. This summer, too, many are planning a vacation on the water. In the Berlin-Brandenburg region as well as the Mecklenburg Lakeland, some 90% of the available boats are already booked solid, according to a portal for houseboat rentals, as vaccinations pick up and some aspects of life return to normal. "There's more than enough fresh air and room to distance on board," says Ströhlein with a laugh.

The restricted travel options of the pandemic era have also driven Maik Petermann from urban Berlin to a houseboat. Brandenburg was on the agenda as a vacation destination last spring instead of Italy, he recalls. "There, we saw houseboats on many lakes during our hikes — and then said to ourselves that that might be something for us." He and his partner were so delighted by the houseboat vacation they ended up taking that they bought one themselves.

Panoramic view of the lake

The light gray houseboat that Petermann has now owned since the beginning of the year has its home port in the small town of Schmöckwitz, located on the outskirts of Berlin. The boat is not quite as big as Ströhlein's. But the beautiful panoramic view it offers from the front deck onto the water is exactly the same. Petermann has hung a flower pot on the railing, and there are also two soft upholstered chairs and a small table with cool drinks on deck, making it a very cozy spot. 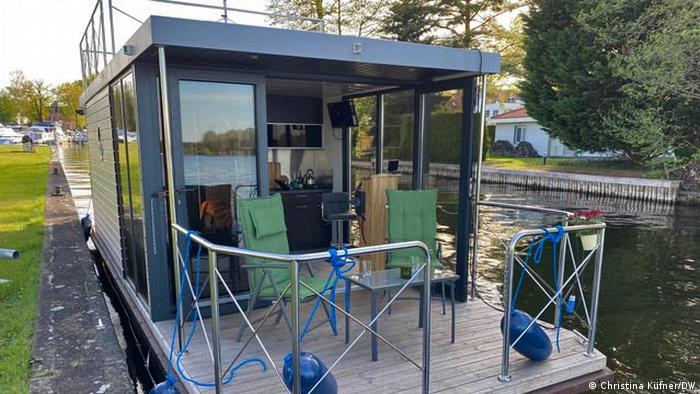 But when he stands at the helm and leaves the harbor, caution is in order, especially when it's sunny like today and numerous motorboats are cruising around on the nearby Seddinsee lake. They can create quite a few waves and really rock a houseboat. "Our boat is 9 meters (29 feet) long – so it's like a small truck that you drive around," says Petermann. "You have to get used to it a little bit."

Solar power system on the roof

Wind is also an issue for houseboat drivers. The best guideline here is: If it's really blowing, it's best not to go out at all. Because of its height, a houseboat provides a large surface area for gusts of wind, which is why it can quickly become difficult to steer.

Sunshine, though, is something a houseboat can always use: The solar power system on the roof feeds the electrical appliances on board, such as the refrigerator, the stove and the TV, which is also available in the small floating apartment. 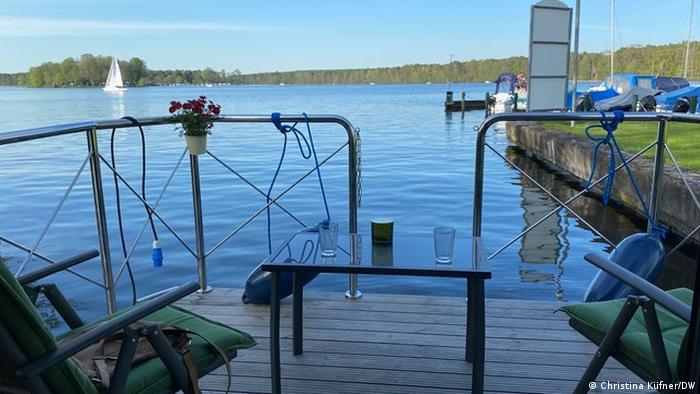 Houseboats don't come cheap. But Petermann is sure that the expense was worth it and is already looking forward to the next trips across the lakes in the region. In July, the light gray houseboat and its owners are due to set sail for their summer vacation around Brandenburg in 2021.

Amid the coronavirus pandemic, Europe is going from one lockdown to the next. Many just want to get away and are pinning their hopes on the summer. Still others plan to stay near home — and travel more sustainably.