A crown or a bucket? When archaeologists make mistakes | Culture | Arts, music and lifestyle reporting from Germany | DW | 27.12.2018

A crown or a bucket? When archaeologists make mistakes

Archaeology explores the history of mankind. In the search for material heritage, however, scientists' urge to explore and their vanity can transfigure their interpretation of finds, as an exhibition in Hildesheim shows.

Science should help us to understand connections. So it is up to archaeologists to investigate the cultural development of mankind: Where are our origins, how did our ancestors live, work, fight? How did they travel? Some aspects of our history are already well researched, yet new sensational finds keep popping up. 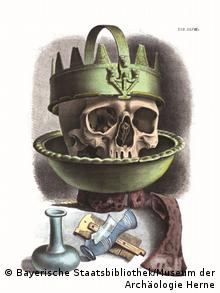 What was believed to be a crown ...

In some cases, researchers were so eager to prove a theory that their negligence led to errors — allowing archaeologists to claim they had found unicorn remains or traces allegedly left by the mythical Greek poet Homer.

Just how much imagination can play a trick on you if you want to believe strongly enough that an object is a true discovery is evident in one find: a piece of iron with decorative fittings, a loop design and copper alloy. Researchers quickly came to the conclusion: it had to be a crown.

As it turned out later, it was actually the fitting from a bucket from the 6th century AD. 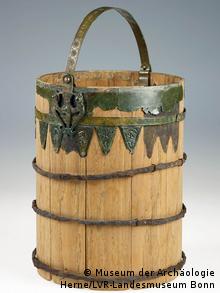 ... was actually part of a bucket

Beyond the honest mistakes made by researchers in the past, in some cases spectacular artifacts were directly forged for financial gain. Radiocarbon dating methods were not available to test the authenticity of artifacts a century ago, so it's easier to understand how a reputed institution like the Louvre Museum could have fallen for a fake gold crown than how modern-day hoaxes have managed to dupe so many people.

In an exhibition titled "Fake & Facts — Wrong Tracks in Archaeology," on show until May 26, 2019, the Roemer and Pelizaeus Museum in Hildesheim is revisiting popular but outdated assumptions about past eras as well as some of the most infamous and expensive cases of forgery.

Click through our picture gallery to find out which mistakes the archaeologists made and what the search for a unicorn has to do with it.

Archaeologists in Egypt have made one sensational discovery after another in recent months. They just opened a 3,500-year-old sarcophagus — and cameras were there to capture what they found inside. (28.11.2018)

As the 50th anniversary of Woodstock nears, archaeologists are digging up the farmland in Bethel, New York, where the music festival took place to see what treasures the hippies left behind in the desert of mud. (27.06.2018)

Experts from Egypt and Germany have found an ancient necropolis, containing more than 1,000 statues and eight tombs. It's the fourth major discovery in a year, and could eventually prove a much-needed boon to tourism. (24.02.2018)