A confident Thomas Müller is a good thing for Bayern Munich

Perhaps it's too soon to suggest that Thomas Müller is going to be the man to guide Bayern Munich to silverware this season, but his form is improving at just the right time. 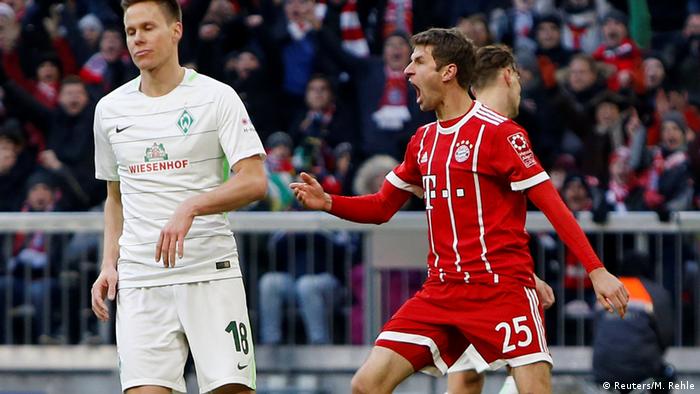 After scoring his 100th Bundesliga goal for Bayern Munich, Thomas Müller told Sky Sports in Germany that he could call it a good day and therefore sleep well. As the season approaches crunch time, Müller's resurgence will likely have Bayern doing the same.

A confident Müller is the one that finds the unnoticed space, scores the awkward goal, makes the uncomfortable pass. He's the one who chests down a long ball from Jerome Boateng and volleys home acrobatically in the box to draw Bayern level just when they need it. He's the one that delivers two goals and an assist in a 4-2 win.

Earlier in the season, a muscle injury kept Müller out of more games than any previous injury in his career. Since returning, he has started to show the kind of form that has been so game-changing for Bayern in the past.

In short, a confident Thomas Müller — particularly in late January — makes all the difference to the Bavarians. In the 2015-16 season, that good form virtually single-handedly dragged Bayern over the line against Juventus in the Champions League Round of 16. Some argued his omission from the starting lineup against Atletico Madrid in the first leg of the semifinals that season was part of the reason they lost.

While the five-time defending Bundesliga champions have a scoring machine in the form of Robert Lewandowski and yet another provider and playmaker in James Rodriguez, it matters that Müller's name has returned to the pot of possible game changers after last season's quieter campaign.

The "drought" in the previous campaign — just 9 goals in all competitions — was an anomaly. In his previous four seasons in all competitions, Müller scored 32, 21, 26 and 23 respectively. Right now, it looks like the 28-year-old is going to improve on last season's haul — and that news couldn't be better timed for Bayern.