A Bonn school hopes to combat extremism with knowledge | Germany| News and in-depth reporting from Berlin and beyond | DW | 03.10.2015

A Bonn school hopes to combat extremism with knowledge

At a school in a Bonn neighborhood often described as troubled, a teacher and a principal are working hard to graduate open-minded and successful young adults. Carla Bleiker reports from Tannenbusch. 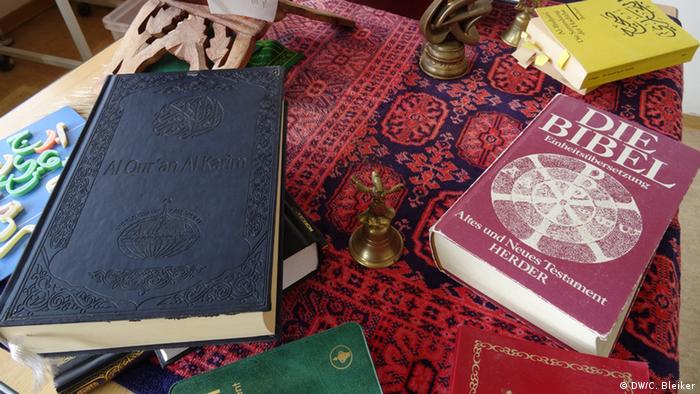 Aziz Fooladvand is never really off work. The Islamic religion teacher at the Freiherr-vom-Stein school in Bonn gives students his cellphone number so they can reach him after class as well. Recently, a student sent him a text to say that a classroom discussion earlier in the day had really made him think. That is Fooladvand's main goal: getting his students to think for themselves.

"My concept is to give my students room to think and to contemplate questions about their religion," Fooladvand said in his classroom."I want them to emancipate themselves from authorities and be brave enough to question information that is presented to them as absolute."

Fooladvand fled Iran after the mullahs rose to power during the Islamic revolution in 1979 and worked for Amnesty International in Bonn as a translator and advisor for refugees and other people in need for 18 years.

In 2008, he was asked whether he could see himself teaching the Islamic religion class while the Freiherr-vom-Stein school needed maternity cover. Fooladvand agreed to fill in - and then he never left. 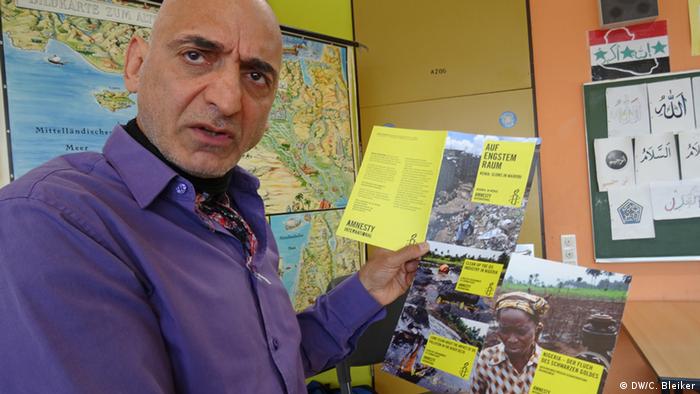 An Islam teacher that youth can relate to is essential at the school, which principal Martin Finke describes as being deeply rooted in its home neighborhood. Twenty-nine percent of the district's residents are foreign born, with many of them coming from Muslim countries, according to figures published in the daily Bonner Generalanzeiger last November, and 26 percent of Tannenbusch's residents practice Islam. Citywide, about 10 percent of residents are estimated to be Muslim. Many families come from Turkey, Iraq and other countries in the Middle East and North Africa. Arabic is the language most commonly spoken by the neighborhood's immigrant population.

"We have students from 46 or 47 different nations at our school," Finke said. Sitting in his small office, the principal admitted that the work at Freiherr-vom-Stein isn't always easy. About 80 percent of his students are the children of migrants, and many of them don't speak German at home.

The unemployment rate in Tannenbusch is high - in 2014, it was at 21 percent. The number of people receiving unemployment payments ("Hartz IV" in Germany) has almost doubled since 2010, to 3,267, the Generalanzeiger reported. That makes Tannenbusch the district with the highest number of Hartz IV recipients in Bonn by far.

"Of course there are problems," Finke said. "But we also keep together here more than in other districts, even though people think of us in a negative way. That's the underdog phenomenon. Some people are surprised when they hear I've been here for 10 and a half years. But I love my job - our kids show so much willpower, it's incredible."

An intellectual approach to Islam

The diversity of the district is mirrored in Fooladvand's classes, as well. He teaches more than 200 students from grade five all the way up to grade 10. Most of them come from North Africa, Turkey, Iran, Iraq and Syria. Though his classroom is a mosaic of many different nations, most students have one thing in common. 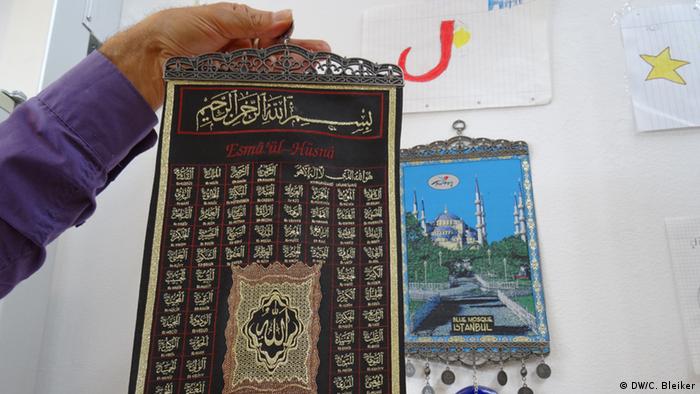 The classroom is decorated with wall-hangers like these, with the many names of God in Arabic and the Blue Mosque in Istanbul

"The majority of them come from families less inclined toward education," the teacher said. "Most of them are orthodox and traditional Muslims. Eighty percent of my students pray five times a day, but when I ask them why, they don't know what to say."

The freedom that Fooladvand gives his students is new for many of them. He wants the youth to approach their faith in an intellectual way and not just focus on externalities like headscarves and abstaining from pork and alcohol. They learn that humanism is at the core of Islam.

Next to Fooladvand's desk is a table with artful editions of the Koran, as well as the Bible. And the walls display postcards from Jerusalem that show the city's holy places for Muslims, Christians and Jews next to student-drawn Arabic letters for the many different names of God. God, Fooladvand explains, wanted a world full of diversity: That's why there are so many different religions. And there is not one that is better than the others.

"If I can get to the point where the kids accept all religions, then we achieved a lot," he said.

Fooladvand believes that teaching Islam's humanistic qualities will help his students become more accepting - and keep them away from extremists on the hunt for new recruits. 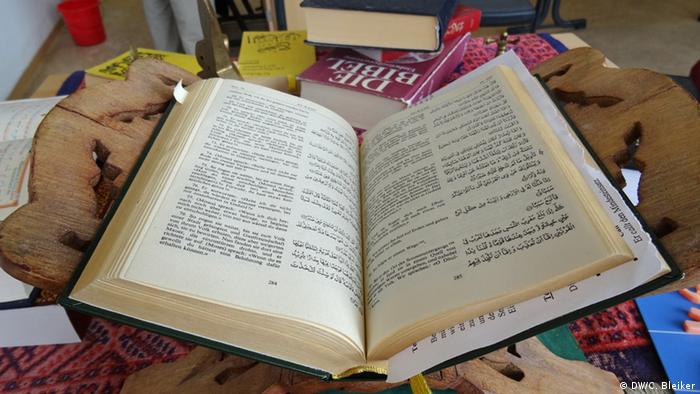 "Ignorance is what fuels extremism, as fundamentalists believe they have the exclusive truth" Fooladvand said. "We can't afford to lose any more young men and women to extremists, which is why I teach my students that their faith should instill peace in their hearts, that God is accepting of all religions - and not a violent dictator."

Keeping young Muslims from falling into the hands of Salafists is a heavy focus in Tannenbusch. The district is considered as a "problem area" by many people in Bonn and beyond. Bekkay Harrach, a German born in Morocco who allegedly fought for al Qaeda, left Tannenbusch in 2007 and was killed in Afghanistan in 2010, at the age of 32. There are some who are alleged to have fought in Afghanistan or Syria who have since returned to Tannenbusch.

Providing a perspective is key

Principal Finke said one of Tannenbusch's biggest problems was the discrimination that students experience from their peers outside of the neighborhood, as well as potential employers and university admissions staff.

"When the students are rejected by the majority society, they turn to extremists," Finke said. He added that students who don't see a future for themselves could easily fall prey to extremist preachers like Pierre Vogel, a German convert from Christianity who has endorsed militancy in the name of Islam.

"He tells them 'Hey, this life doesn't have much in store for you, so why don't you come with us? We guarantee you a great life in the beyond,'" Finke said. "The kids feel they get recognition there that they cannot get anywhere else."

Fooladvand put it this way: "If Ahmed has a harder time than Peter getting a vocational training spot with a company, Ahmed is likely to opt out of our society." 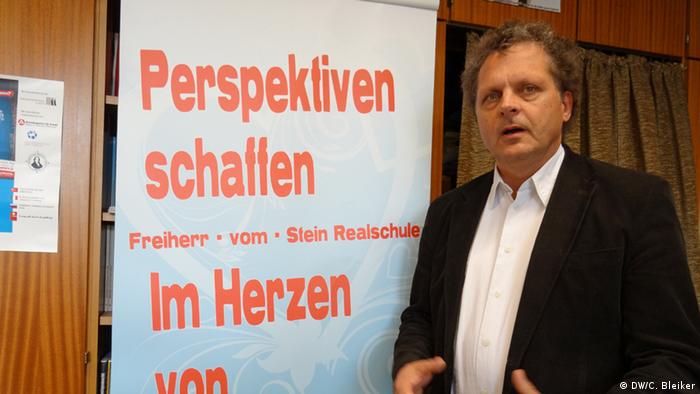 At the Freiherr-vom-Stein school, the magic word against extremism is "perspectives." Fooladvand teaches his students that their future can include a peaceful and accepting Islam, and Finke said one of his staff's main tasks was to "teach the kids to believe in themselves."

Before they enter the school, fourth-graders are asked to draw a picture of themselves. The task: imagine yourself in your dream job 20 years from today. Results vary, of course: car mechanic, veterinarian, soccer player.

It's the goal of Fooladvand, Finke and their colleagues to keep the children on the path they've dreamt for themselves. If they pull that off, extremists' chances of snatching the children up are slim - that is, if German society will allow children with foreign names and an address in a difficult part of town the chance to succeed.

Around 450 Islamic extremists have traveled from Germany to Syria, and no fewer than 10 percent of them come from Bonn. Why has the former German capital become a center for Salafist extremism? (13.11.2014)

Since the start of the school year, Islamic religious instruction has been offered at selected schools. However, very few children are receiving the classes due to a serious shortage of teachers. (05.03.2013)