Once a month, Euromaxx presents exclusive dream homes: Houses, apartments and flats from all over Europe. Schminke House, a modern classic designed by Hans Scharoun, is located in Löbau, Saxony. 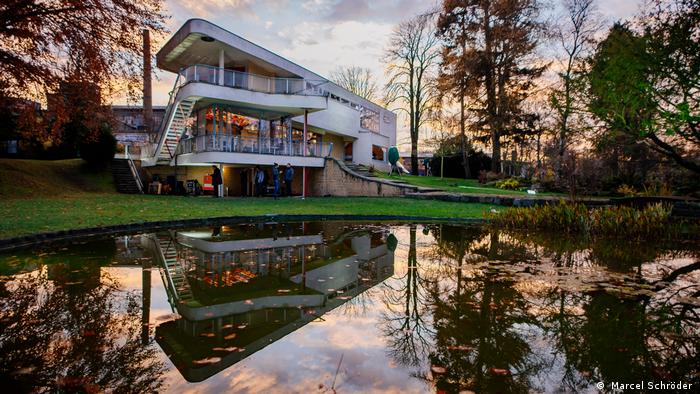 Built in the early 1930s, Schminke House is one of the most famous houses of Classical Modernism and the favorite building of it's architect Hans Scharoun.

Colored portholes, the balcony a command bridge, the outside staircase similar to a railing - Bremen architect Hans Scharoun (1893-1972) created a milestone in the architectural history of modernism with his ship-like building. Its nickname is the "Noodle Steamer", because Fritz and Charlotte Schminke, the owners, were pasta manufacturers.

In 1930, the Schminke family asked the architect to design a practical and easy-to-manage, modern home, designed for two parents, four children and occasionally one or two guests.

In close contact with the building owners, Hans Scharoun developed a design that met the needs of the future residents as closely as possible. Since its completion in 1933, Haus Schminke has been regarded as a key creator of so-called organic building and the house is one of the most family-friendly residential buildings of its time.

Children's paradise in a "Noodle Steamer "

Hans Scharoun planned the Schminke House from the perspective of its youngest users: The windows in the play area in the central entrance hall are so low that the four children can climb in and out effortlessly when they are open. The central hall serves as a living, dining and children's area in equal measure, where the entire family life took place. Similar to a modern fitted kitchen, the kitchen is a space of short distances. Furniture and built-in cupboards testify to the desire for modernity and functionality.

With its rounded roofs, balconies and balustrades reminiscent of an ocean liner, the elegant house not only made architectural history but was also regarded by Hans Scharoun himself as "the dearest" of his houses and is regarded as a counterpart to the rectangularity of Bauhaus modernism.

For 12 years the family lived in Kirschallee 1b in Löbau, right next to the factory premises, until the Red Army confiscated the house in 1945 and Fritz Schminke was expropriated. The building was then used as a recreation home for the Free German Youth organization, as a pioneer house and leisure center. After the fall of the Berlin Wall, the town of Löbau became aware of the building because crowds of visitors interested in architecture wanted to visit it.

Between 1999 and 2000, the building was extensively renovated and largely restored to its original condition. In May 2009, the Haus Schminke Foundation took over responsibility for the building. The Löbau Noodle Steamer can be visited from Tuesday to Sunday and it is even possible to stay there overnight.

Once a month, Euromaxx takes you on a 360° tour of some of Europe’s coolest mansions, apartments and lofts. For our first episode, we head to Siusi in South Tyrol. (23.05.2019)

Bavarian King Ludwig II had Neuschwanstein built as a retreat - but for a long time it has not been quiet here. Every year, 1.5 million visitors visit the fairy tale castle. Join us for a all-round view visit. (07.10.2019)