3-0 wins: Wolfsburg and Gladbach march on

Wolfsburg survived going down to 10 men to win in France, with Ricardo Rodriguez scoring a brace. Gladbach's Branimir Hrgota also scored two in a win that saw them top their Europa League group. 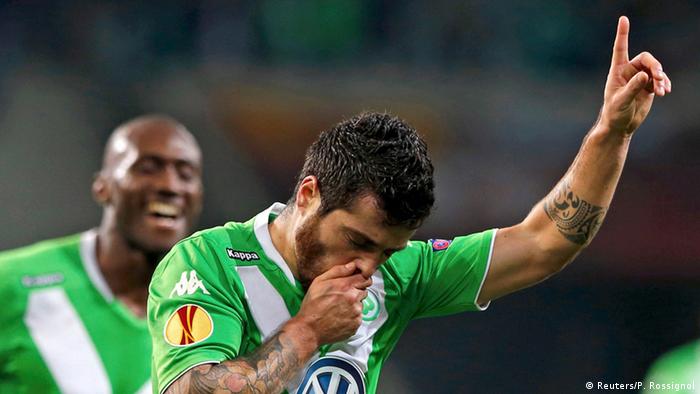 Wolfsburg, unchanged from their derby win on the weekend, were a little shaky to start in France. Lille, needing a win to knock Wolfsburg off second spot, were aggressive and nearly took the lead when Idrissa Gueye headed goalwards, though the post denied the winger.

Belgian striker Divock Origi, on loan from Liverpool, wanted a penalty after coming together with Josuha Guilavogui but referee Halis Özkahya didn't agree. That didn't stop the home side, who sensed just how nervous their Bundesliga opponents were.

After half an hour, Wolfsburg were still struggling to get in the game. Dieter Hecking's side were certainly forcing their opponents into a lot of work, but it was a risky strategy. Wolfsburg keeper Diego Benaglio had to be alert to deny Origi's stinging shot from going in.

By half time, the visitors would have been happy to be level. One brilliant move later though, and they were ahead. Kevin de Bruyne sliced the defense in two with his pass to Ivan Perisic and the Croatian's cross was converted by Vieirinha. 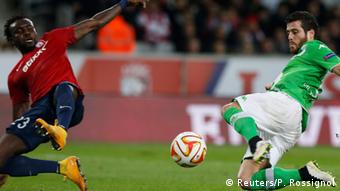 Wolfsburg didn't deserve to lead at the break

Despite being the second best team in the first half, Wolfsburg entered the second 45 minutes safe in the knowledge that conceding would no longer spell the end of their Europa League adventure. Bas Dost came on at the break and nearly set up de Bruyne for the second, but his pass was just beyond the Belgian. Soon after, Wolfsburg had an even better chance but after Dost's header was spilled, Perisic couldn't poke home the rebound.

With 35 minutes to go, Wolfsburg's improvements were stopped in their tracks as midfielder Guilavogui picked up a second yellow card. Down by a man, Wolfsburg were vulnerable but Lille looked all out of gas after their first-half efforts.

Having not seized on their chance, Lille were left red faced when Wolfsburg doubled their lead. Left back Ricardo Rodriguez curled a beautiful free kick from 25 yards into the top corner, leaving the hosts with it all to do.

Lille worked hard to try and get back into the game, and as the last quarter of an hour approached the home side were handed a lifeline. Robin Knoche gave away a penalty after a foul on substitute Ronny Rodelin, but Origi's penalty was saved by Benaglio.

At the other end, Rodriguez soon stepped up to show Origi how it was done. The Swiss defender sent Vincent Enyeama the wrong way after Perisic's free kick had hit the outstretched arm of Lille's one-man wall. After a slightly nervous start, Wolfsburg survived and, despite being a man down, improved in the second half to win comfortably. Their result also meant that all of Germany's group-stage teams had made the knockout rounds of European competitions this season. 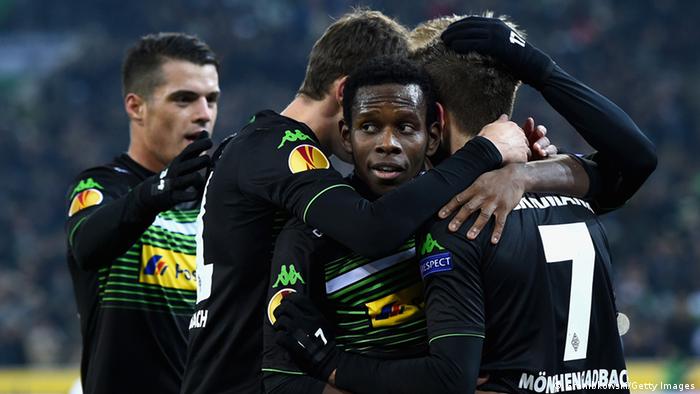 Gladbach made three changes to the team for the game against Zurich. Oscar Wendt, Ibrahima Traore and Branimir Hrgota all started instead of Julian Korb, Thorgan Hazard and Max Kruse.

The opening quarter of an hour passed without much incident in and around the goalmouth. Christoph Kramer headed into the side netting at the back post and Hrgota's poor control denied him a one-on-once chance in front of goal. Zurich, needing a win to qualify for the Europa League knockout stages, had little of the ball, sat deep and, apart from one hurried clearance, failed to test Yann Sommer in the Gladbach goal.

Knowing a draw would be enough to progress, Gladbach's players maintained both their patience and possession of the ball. Traore dragged a shot wide as Lucien Favre's side neared the opening goal. It came when a through ball was deflected into Patrick Herrmann's path and the attacker stayed composed, touched around the keeper and slotted home.

Raffael then miscued a header and Hrgota drilled a long-range effort just past the post as Gladbach's superiority became very apparent. Traore, the liveliest player on the pitch in the opening half, then cut in to curl a shot against the post as Favre's men sought a second goal to put the match out of Zurich's reach. 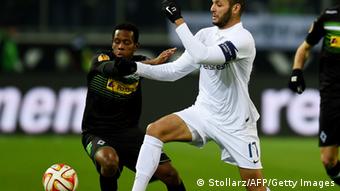 Traore put in another brilliant display on the wing

Despite more chances, the scoreline didn't change before the break. Zurich, in desperate need of some resurrection, showed more signs of life in the second 45 minutes but Gladbach still came away with the better chances to score. Just before the hour mark, they did exactly that. A neat one-two between Hrgota and Raffael was finished at close-range by the Swede.

Zurich goalkeeper David Da Costa saved brilliantly to deny Raffael, but Hrgota added his second, brilliantly looping the ball over the goalkeeper to set up a subdued final 20 minutes.

Sommer made a save late on, but fantastic home support saw Gladbach finish off a game they comfortably controlled throughout. There was late concern for World Cup winning midfielder Kramer, who hobbled off to receive some treatment for a foot injury. Kramer would be a big loss for Gladbach's game against Leverkusen this weekend, the club from which Kramer is on loan.

Gladbach drew 2-2 in an exciting game in Spain, but needed a win to secure progression. Wolfsburg lost 2-0 at home to Everton, despite playing more of the football and having more of the chances. (27.11.2014)

Europa League: All results and tables

Stay up to date with all of the results and tables in Europe's second-biggest club competition, the UEFA Europa League. From Germany, Wolfsburg and Borussia Mönchengladbach are the teams to watch out for. (28.11.2014)