Flights, trains and buses across Argentina came to a halt as labor unions protested the policies of Mauricio Macri. The president's popularity has plummeted ahead of an election later this year. 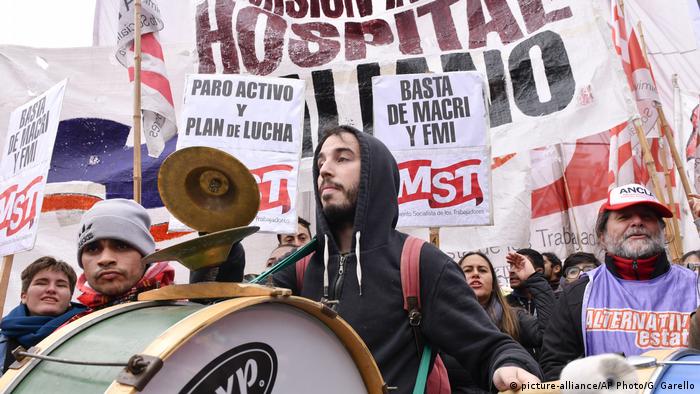 Much of Argentina came to a standstill on Wednesday as opponents of President Mauricio Macri launched a 24-hour strike to protest government austerity measures in response to inflation that has reached 55 percent over the past year. The cuts were initiated as part of a deal with the International Monetary Fund (IMF) for a $56 billion (€50.3 billion) package of emergency loans.

The strike caused hundreds of flights to be grounded, halted bus and train lines and forced banks, courts and many schools to close. Argentina's main grain ports were also shut and hospitals offered only emergency services.

Many workers stayed home because subway lines were closed.

The strike was organized by labor unions, furious over Macri's austerity measures. Those include the firing of workers and the reduction of government subsidies. The spending cuts and inflation combined have pushed up core costs for households like transportation, electricity and water.

Union leaders say government policies have led to the closing of some 14,000 small and mid-size companies while Argentines continue to lose purchasing power to an "alarming" inflation rate of over 50%.

Macri's popularity has fallen in recent months before elections in October, when he will seek a second term.

Protesters rallied against police brutality in Buenos Aires after three teenagers and one adult died during a police car chase. Police officers had allegedly opened fire at a car, which then crashed into a truck. (25.05.2019)

Argentina's ex-President Cristina Fernandez on trial ahead of election bid

Former President Cristina Fernandez has accused her rivals of orchestrating a corruption trial to thwart her October election bid. She can be prosecuted but, as a senator, not imprisoned. (21.05.2019)