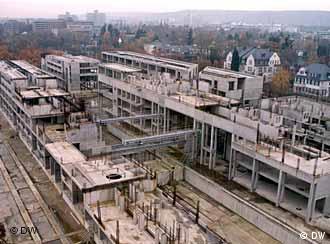 On October 11, the German government decides that DW headquarters in Cologne should move into the Schürmann Building in Bonn. Designed by and named after the Cologne architect Prof. Joachim Schürmann, the building was originally supposed to house the offices of deputies to the German parliament. That plan became obsolete following the decision after German unification to move the government and parliament back to the former pre-war capital, Berlin. DW, for its part, had been looking for new quarters due to a high concentration of asbestos in their present building. At Christmas 1993, flood waters from the Rhine River caused major damage to the Schürmann Building which was still under construction. It was decided to renovate and complete construction of the building.

As of July 1, DW-TV begins broadcasting 24 hours a day. DW gets a new corporate design and new logo.

The launch of AsiaSat 2 for the Asia-pacific region closes the last gap in the DW satellite network.

DW starts the digitalization of its radio programs. The English Service is first.

In June, Dieter Weirich is re-elected to another term as director-general by the Broadcasting Board. He presents a "Ten Point Program" for reforming the Deutsche Welle (DW) by the year 2000. 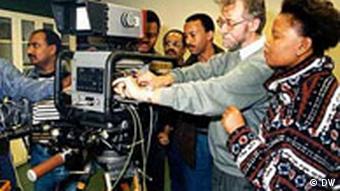 The former television training center of SFB in Berlin is integrated into DW operations. In addition to the Deutsche Welle Training Center (DWFZ) for radio in Cologne, there is now a DWFZ for television inBerlin.

With the DW-FORUM "Latin America", Deutsche Welle launches a new, high-quality event format. Among the prominent guests are Foreign Minister Klaus Kinkel and the Minister for Economic Cooperation and Development, Carl Dieter Spranger.

Together with the European Broadcasting Union (EBU), Deutsche Welle sponsors and confers the new World Music Award. The program winners are: "Lapland Joiks", a program in the WDR series Musikpassagen;

Cucamonga from BRTN Radio/Brussels, and the program "Katadjak" from the series Svangrum by the Swedish Broadcasting Corporation.

The festive backdrop for the awards ceremony is the first DW World Music Night at the broadcast house in Cologne.

The Broadcasting Board decides to set up a Bosnian Service. Because of the unrest in Albania the transmission time for DW-RADIO/Albanian is extended by 30 minutes. DW-RADIO launches the language course "Marketplace - German in Business". Cooperating on content are the German Chambers of Industry and Commerce (DIHT) and the Carl-Duisberg-Centers (CDC).

The DW Literature Prize is awarded for the 6th time. This year the focus is on the Turkish language and the winners are: Hidayet Karakus from the city of Izmir and Asli Erdogan from Istanbul.

Reorganization is on the agenda at DW-RADIO. The Danish, Dutch, Norwegian and Italian services are disbanded. The staff from Africa/French and the French program of the European Service are combined into a single French Service. The Russian Service is expanded from eight to thirteen hours a day. The German Service returns to its former four-hour rhythm.

Digital Radio Mondiale (DRM) is founded in Guangzhou, China. The consortium includes international broadcasters, businesses, research institutes and other organizations from the media sector. Chairman is Peter Senger, chief engineer at DW. The goal is to digitalize the AM frequency band and give short wave reception a VHF (FM) quality.

In December, the German parliament debates the "External Media Representation Reform". The basis for the discussion is a position paper by Michael Naumann, who, following the federal election in October of this year, was appointed as the government's Commissioner for Cultural Affairs and the Media. His portfolio also includes Deutsche Welle, which until now had been supervised by the interior ministry.

DW is the first public broadcaster in Germany to begin training online specialists.

DW-TV is re-positioned with the start of the new year as a purely news and information channel with a clear structure and new format which includes Journal, the magazines and documentaries. German and English broadcasts rotate hourly. In addition, there are two hours of Spanish.

The budget committee of the German parliament votes to slash DM 30 million off the DW budget: DM606 million for the current year. Further cuts are to follow in the years to come. According to a government decision, the 2000 DW budget will drop to DM581 million. The medium term fiscal planning through 2003 calls for cuts totaling DM89 million.

The director-general presents a concept that includes sweeping cost-cutting measures. Both the broadcasting and administrative boards agree to the proposals presented by DW's management. In September, some 600 employees in Cologne and Berlin demonstrate against the budget cuts.

DW-RADIO expands its foreign language programs for the crisis-ridden Balkans. In Berlin, DW sponsors a benefit concert for Kosovo refugees with the National Youth Orchestra.

20 years of international co-productions; in total, 227 joint productions between DW and broadcasters from 84 countries.

From July, Radio Guangdong in China begins rebroadcasting the Chinese Service of DW-RADIO. Several days later, DW broadcasts a historic and momentous Interview with Taiwan's President Lee Teng-hu. It is "a kind of political will and testament," as Ortwin Lowack, the president of the German-Chinese Society, described it. For the first time Lee calls relations with China "a special relationship between nations" deviating from the official standpoint in Peking of "one nation - two systems". The remarks in the DW interview lead to serious political tensions between the two countries.