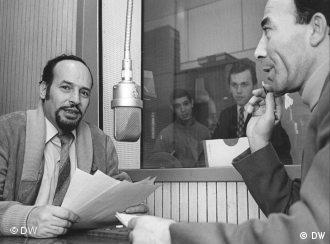 DW takes over the legal broadcasting rights from NWDR, which itself was split into two separate networks serving northern and western West Germany - Westdeutscher Rundfunk (WDR) and Norddeutche Rundfunk (NDR). For DW, the first short wave transmitter is set up in Jülich, not far from Cologne.

DW-Radio: The Arabic Service is added to the already existing languages.