100 days of solitude - The Greek prime minister's start in office

Alexis Tsipras has been the Greek leader for 100 days. In that time, important laws were announced, but never materialized, and talks with creditors have stalled. Yanis Papadimitriou reports from Athens. 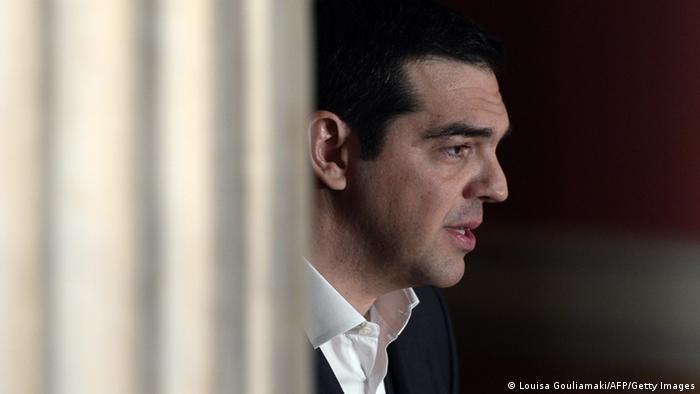 The leftist prime minister caused a stir in his first official act: only hours after his Syriza party's election victory on January 25, he named the right-wing populist party, Independent Greeks, as coalition partners. The Greek left and right-wing populist movements were thus welded together by a list of common enemies - above all the so-called "Troika," composed of representatives from the EU, International Monetary Fund (IMF), and European Central Bank (ECB).

The left-right coalition seeks nothing less than the total repeal of austerity policies. It was said after the election that the minimum wage would "immediately" be raised to 751 euros, the base tax exemption raised to 12,000 euros and the across-the-board property tax for all (ENFIA) put in place by the previous administration would be done away with.

Beyond that, there would be new talks about the Greek bailout plan. The newly appointed finance minister, Yanis Varoufakis, said that uncooperative EU partners would be "given an offer they couldn't refuse."

One hundred days later, the results are rather sobering: Hellas is closer to bankruptcy than ever before, the lifting of the minimum wage has been postponed until 2016, and the ENFIA tax is still in effect. 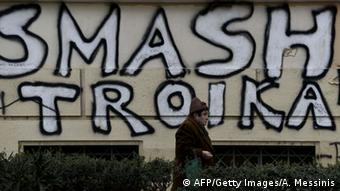 The troika of lenders - EU, IMF and ECB - are not very popular in Greece

Kostas Chryssogonos, an EU parliamentarian for Syriza, prefers to see the glass half full rather than half empty, and speaks of a balance sheet "with positive and negative aspects."

Among the positive aspects are the immediate steps that were taken toward ending poverty, such as laws regulating extended repayment schedules for back taxes. Speaking to DW, Chryssogonos said that it would obviously be impossible to repeal all of the austerity measures within three months, and that people need to see that the leftist Syriza party was elected to a four-year term. Not lastly, the leftist says that the new government has succeeded in changing the course of talks with creditors, and that the "ritual retribution of inspections" has passed for Athens. A negative aspect is the failure to find compromise, but that is due to the obstinate stance of the lenders, according to Chryssogonos.

Nary an alternative financial source in sight

Political scientist Giorgos Tzogopoulos from the Athens think tank Eliamep has a different take. "In the past 100 days, Prime Minister Tsipras has consistently sought alternative sources of lending - be it Russia, China, or even Iran. In the end he was unsuccessful, and now he has no other choice but to implement the financial arrangements agreed to with the original lenders." 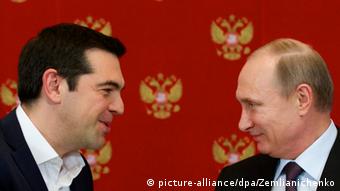 Tsipras initiated a hectic diplomacy tour attempting to cobble together an EU coalition opposed to austerity politics when he traveled to Cyprus in February. He then traveled to Rome, Paris, and Brussels to no great affect. A closely watched initial handshake with Chancellor Angela Merkel took place at the EU Summit on February 12.

At that time, Finance Minister Varoufakis was using an aggressive tone when speaking of negotiations and dishing out ample criticisms of his EU colleagues. Unfortunately that was the wrong strategy, says financial analyst and publisher Makis Andronopoulos. He told DW in disgust that "the past 100 days have been Syriza's Waterloo. They made every mistake they possibly could in negotiations with creditors. Their initial analysis was flawed, and the fact that they opted for confrontation, even provocation, was also a bad idea."

At the same time, Andronopoulos admits that he sympathizes with the leftists and has faith in Tsipras, but the economist stressed that Tsipras finally has to deliver, and to free himself from extreme leftist ballast. His greatest hope is that "Tsipras can push a new deal through parliament, profit from the continuing ECB bond purchasing program, and then call new elections in which candidates from the party's far-left wing can be dropped from the ballot." 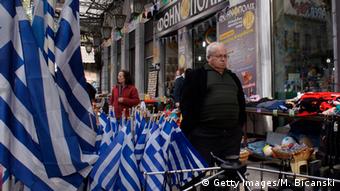 Will Greece go down with all flags flying?

Panagiotis Lafazanis, "Minister for Productive Reconstruction," and responsible for energy and environment in the government, is also acknowledged as the opposition leader within the party. He gained attention in his first few months in office through his hostility towards privatization. He made one notable exception for Russian investors though. During a trip to Moscow in April, Lafazanis announced a "groundbreaking cooperation" between both countries regarding energy policy. Shortly thereafter, Prime Minister Tsipras traveled to Moscow for talks with Kremlin boss Vladimir Putin. Lafazanis has continued to garner attention, most recently this past Sunday (3.5.) when he told the Kathimerini newspaper that if the leftists are unable to push through their radical agenda, they would be better off giving up control of the government.

The threat of referendum

EU representative Kostas Chryssogonos doesn't follow that logic. The leftist politician tells DW, "The responsibility of governing was given to us to use, not to give up." He does have a certain amount of understanding for differences of opinion among party members being publicly aired though: The Syriza party is not like the others. It is a coalition of diverse voices and currents. In the end, decisions are made, and "red lines" are drawn by the appropriate party organs, and these bind the entire party, says Chryssogonos. Because of these "red lines," some in the party are threatening to hold a referendum, should negotiations with creditors break down.

Constitutional lawyer Chryssogonos was the first to raise the specter of a national referendum, shortly after the new government took power. Meanwhile, Prime Minister Tsipras seems enamored with the idea as well. But political analyst Giorgos Tzogopoulos doesn't believe that a national referendum would help much. "All of the polls indicate that the majority of Greeks want a balanced compromise with the lenders - even if that doesn't fit with Syriza's election promises."

The Greek government has said that differences between the EU and the IMF are to blame for the delay in debt negotiations. Both sides, however, have appeared confident that a final deal is within reach. (05.05.2015)

The protracted plight of cash-strapped Greece has taken its toll on German exports to the southern eurozone nation. Shipments have dropped considerably, while imports from Greece have remained stable. (04.05.2015)