For many German film fans, Bavaria is the heart of the German movie industry. Still, the region's role in film history also draws criticism with strong political echoes. DW takes a look as the Munich Film Festival rolls.

First thing's first: an apology. We've pulled together a list of 10 great filmmakers from Bavaria — and there is not a single woman on the list. How can that be, especially in today's times when discrimination against women in the film industry is being scrutinized, with good reason?

We limited our retrospective list to film directors and chose not to look at actors. Female directors would have been welcomed.

Most female directors who are generally associated with Bavaria, such as Academy Award-winning director Caroline Link or the controversial Nazi-propaganda filmmaker Leni Riefenstahl, ended up in southern German state only later in their lives. Our list's film greats needed to actually come from Bavaria.

So it's a list of 10 Bavarian blokes. Maybe this actually says something about gender roles and politicsin Bavarian society. It's worth thinking about, especially in light of recent events as Bavarian alpha males dictate policy. 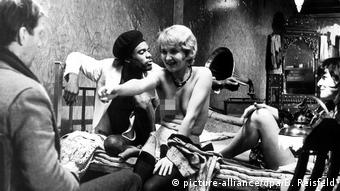 Bavaria: A magnet for filmmakers

But back to film: Bavaria has unquestionably been an important location for German film, ever since the era of silent movies. Many were produced and filmed in the state, and multiple movie studios were also opened, such as the Bavaria Studios.

In addition, the University of Television and Film (HFF), one of Germany's best film schools, is also located in Munich. The city with its many film festivals is a vital part of the German film scene.

It's not just native Bavarians who have used the mountainous landscape in their films; Bavaria has also drawn film directors from all over Germany to the region, and many have chosen to remain there. One example is Edgar Reitz, born in Rhineland-Palatinate, who settled down in Munich and whose beautiful movies feature the city.

Even foreign film directors traveled to Munich and Bavaria to shoot their films, often in the Bavaria Studios. Stanley Kubrick, Ingmar Bergman, Luchino Visconti and Orson Welles are just a few well-known names.

The image of Bavaria in film also has to be critically examined, however.

In the 1950s, a genre known as the Heimatfilm, or "homeland film," with its focus on rural Bavarian settings and traditional cultural and social practices, helped make Bavarian clichés ubiquitous with Germany for much of the outside world.

Younger directors have tried to straighten out these one-sided images of Bavaria in their films.

Yet even today many Bavarians, known for their strong regional pride, see themselves surrounded by foreign enemies — and that includes Germans from other parts of the country. The current debate between Bavarian politician and Interior Minister Horst Seehofer and Chancellor Angela Merkel over migration policy echoes this idea.

Movies and television capture this tension between those who take pride in Bavaria's image and those who look at the region more skeptically.

The 35th edition of the Munich film festival has opened with Claire Denis' "Let the Sunshine In." An epic new Hitler documentary and Sofia Coppola's "The Beguiled" also await. (23.06.2017)

Many movie fans see Munich as Germany's true home of film. With the 2018 Munich Film Festival in full swing, we talked to Munich Film Museum director Stefan Drössler about great films set in the Bavarian capital. (29.06.2018)

For many cinema enthusiasts, Munich is Germany's secret film capital — although not everyone in the country would agree. But many great directors were in fact born in Bavaria. Here's 10 great Bavarian film directors. (03.07.2018)