Tunisia has declared itself a multi-faith state. But the attack on the Jewish school in Djerba shows that radical anti-Semitism has its adherents in Tunisia, too – primarily in jihadist circles. 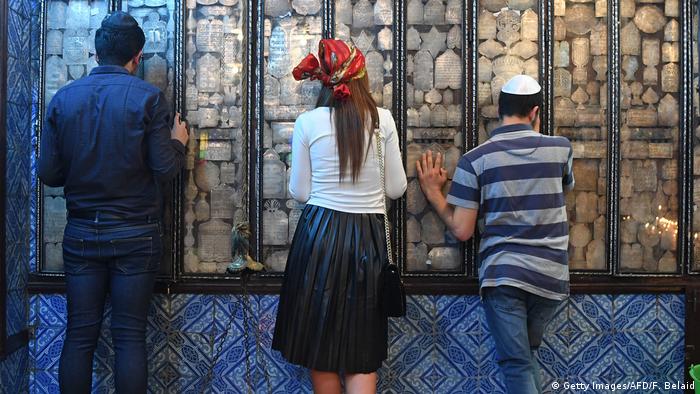 "It's part of the protest against rising prices." The laconic words of Elie Trabelsi, the head of the Jewish community on the Tunisian island of Djerba, commenting on his Facebook page about the attack on the community's school late on Tuesday evening. Persons unknown threw incendiary material from a moving car into the reception hall of the building. Nobody was hurt; the bombs caused only a small amount of damage.

The perpetrators were clearly taking advantage of the temporary reduction in Tunisian security forces on the island. They were withdrawn from Djerba, and many other provinces, because of the protests in a number of Tunisian cities. Tunisians have been protesting for days against tax increases and price hikes.

In recent weeks, incitements to violence against Jews in Tunisia were published on social media networks. "We must harass the Djerba synagogue until it is gone," said one post. "We must drive the Jews out of Tunisia and set fire to the synagogue in Djerba," said another.

Trabelsi had already voiced his opposition to pronouncements of this kind in early December last year. "These people always find a reason to incite others, using the pretext of a revolutionary cause," he wrote on Facebook. "I feel sorry for you," he said, addressing the perpetrators.

Read more - Tunisia protests: A trade-off between a strong economy and democracy?

However, Jews and Muslims in Tunisia basically have a good relationship, Trabelsi told DW. "We live together like brothers. We visit and help each other." He says there's no difference between Arab and Jewish citizens: "We are all Tunisians – and nothing else." 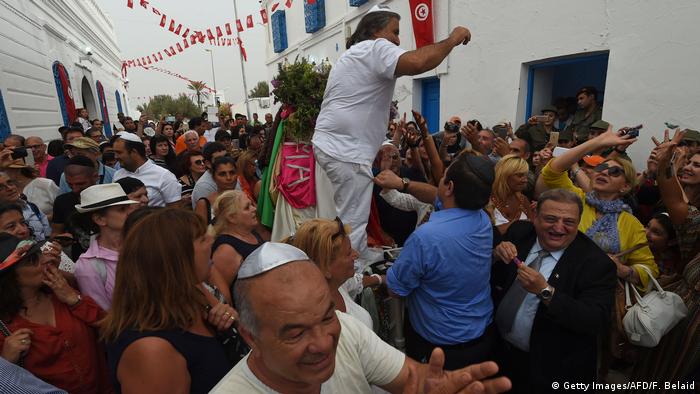 On the Tunisian island of Djerba, the first day of the annual Jewish pilgrimage to the synagogue is marked with a procession

Trabelsi suspects that the people behind the attacks are extremists. "The ones who threw the Molotov cocktails aren't real Muslims. They're malicious people who want to divide Arabs and Jews in Tunisia." He says there have been no comparable incidents in recent times: "Real Tunisians have never done anything like that." He suspects that last night's criminals were acting on the orders of a radical extremist movement.

The institutions of the Jewish community on Djerba have been targeted before. On April 11, 2002 an attacker drove a truck loaded with 5,000 liters of liquid gas into the al-Ghriba synagogue near the village of Er-Riadh. Nineteen tourists died in the explosion, most of them Germans.

After that attack, many Tunisian Jews considered leaving the country, but only a few have actually done so.

So far, the majority have decided to remain in Tunisia – for the sake of the congregation, too, where every single member counts. Over the past few decades the Jewish community has seen a massive reduction in the number of its members. This dates back to World War Two when German troops occupied Tunisia: Many of the country's Jews were arrested and deported to German concentration camps. Thousands of them were killed. 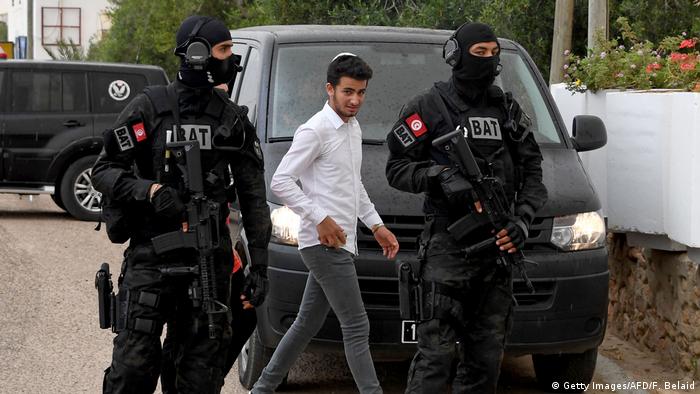 Special forces stand guard outside of Ghriba synagogue during the pilgrimage

Repercussions of the Middle East conflict

In 1956, the year the country gained its independence, Tunisia's president, Habib Bourguiba, declared: "The Tunisian nation is not only Muslim."

"We must give guarantees, and declare before the whole world that the Tunisian state respects religions, and guarantees that people will be able to exercise freedom of religious belief as long as this does not interfere with public order."

But even Bourguiba could not prevent the Arab-Israeli conflict affecting the mood in Tunisia as well. Under the French Protectorate, Jews enjoyed more rights than Muslims. Their passports, for example, did not say "Tunisian" but "Ward of France," a status the French refused to give to Muslim Tunisians. This also helped to poison the atmosphere, with the result that more and more Jews left the country for Europe or Israel.

The rhythm of the emigrations corresponds to the climaxes of the Middle East conflict. A much larger number of Jews than usual emigrated after the Six Day War (1967) and the Yom Kippur War (1973).

The Muslim theologian Abdelfattah Mourou, vice-president of Tunisia's Assembly of the Representatives of the People, is convinced that the Jewish presence is good for the country as a whole. "A unified culture leads to radicalism," he said in an interview with the media in 2017. "A multicultural society, by contrast, allows us to accept each other."

But the Tunisian state and its citizens – both Muslim and Jewish – now face a new challenge: militant jihadism. Several thousand Tunisians joined the terrorist organization calling itself "Islamic State" in Iraq and Syria. A large number of these militiamen have now returned to Tunisia. The terrorists have adequately demonstrated their willingness to use violence, as for example in the attack on the Bardo National Museum in 2015, and another on tourists on a beach near the city of Sousse that same year. Many people died in both incidents. Attacks like these are potentially directed at all Tunisians – and thus also against the Jews.

To protect them, the Tunisian government has stationed police guards outside many Jewish institutions, to watch them around the clock. Elie Trabelsi believes they will now increase security around his congregation's institutions on Djerba. "We trust that an event like this will not be repeated," he says.

Israeli-Palestinian violence should not be allowed to affect the Jewish community in Germany, Israel's ambassador to Germany has said. Chancellor Merkel condemned antisemitic attacks and rallies in the country.

Menorah from iconic photo returns to Germany for Hanukkah 19.12.2022

A Hanukkah menorah at the center of the most searing images of the Nazis' rise was lit in the German capital 90 years after the family who owned it fled the looming Holocaust.

US opens embassy in Solomon Islands amid China threat