The court ruled against the country's abortion law, though it is allowed to stay in place until the end of the year. Under the current law, both the doctor and the woman can be sentenced to time in prison. 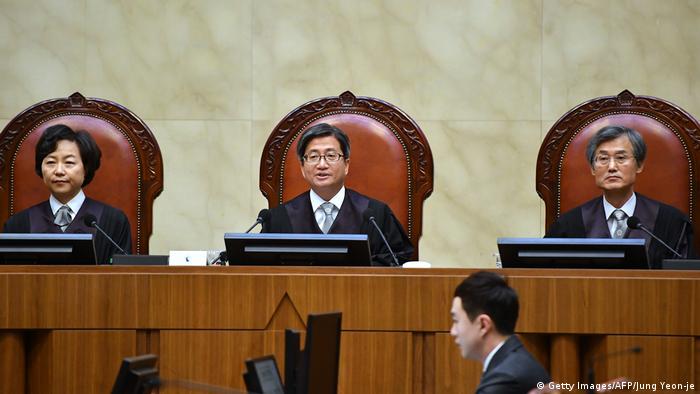 South Korea's Constitutional Court ruled on Thursday that the country's law criminalizing abortion is unconstitutional, as well as a law making doctors who perform them liable to criminal charges.

"The law criminalizing a woman who undergoes abortion of her own will goes beyond the minimum needed to achieve the legislative purpose and limits the right of self-determination of the woman who has become pregnant," the court said.

The move will likely lead to an easing of South Korea's strict abortion laws, though the court said that the current statutes could remain in place until the end of the year. The nine judges gave the parliament in Seoul until the end of 2020 to come up with legislation to roll back the current restrictions.

Read More: International Women's Day: What young feminists around the world are fighting for

Abortion has been against the law since 1953, with some exceptions, such as cases of rape or grave danger to the health of the mother. Under the current law, a woman can be sentenced to up to a year in prison and the doctor up to two years. The Constitutional Court had previously upheld the country's abortion regulations in a closely divided 2012 decision.

"If the case does not fall under an exemption, the law forces the pregnant woman to maintain the pregnancy completely and uniformly without exception even in cases where there are circumstances causing conflicts about abortion due to diverse, widespread societal and economic reasons," the ruling read.

While there have rarely been criminal convictions for violating the ban, the illegality has created a significant social stigma around it and made it difficult for women to obtain the relevant health information.

Women seeking an abortion in Turkey face considerable danger and many hurdles. While the procedure is legal, experts say in reality there is a de facto ban, believed to be orchestrated by President Recep Tayyip Erdogan. (27.01.2019)