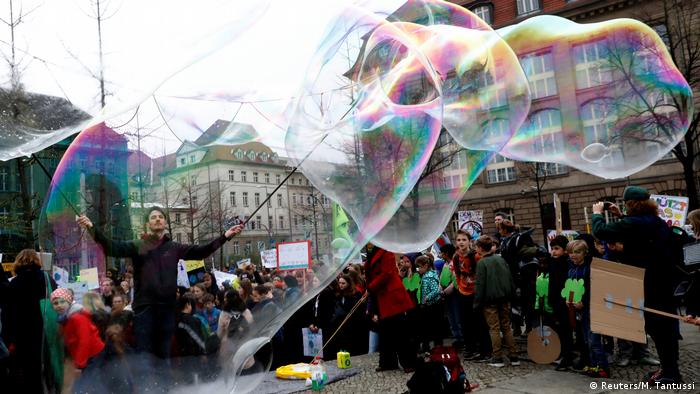 Germany has never really been a climate "trailblazer," much as people like to think it is. So you can't really describe Angela Merkel as the "climate chancellor." It was a complete coincidence that 1990 was taken as the base year for the reduction in CO2 emissions. It was Germany's sheer dumb luck that all the dirty factories were still operating in the East. After reunification they had to be shut down very quickly, which of course made the country's carbon footprint look an awful lot better. By contrast, in the last 10 years, the level of greenhouse gas emissions has barely gone down at all.

If the Fukushima nuclear disaster in Japan had not happened, German nuclear power stations would still be generating electricity. But the catastrophe caused the self-proclaimed climate chancellor to perform a major U-turn. Shortly after taking office in 2005, she overturned a nuclear phaseout planned by the Social Democrats and the Greens. One year before Fukushima, she talked about "nuclear power as a bridging technology." Then in the summer of 2011, following Fukushima, she announced a new nuclear moratorium.

Since then Germany has been battling with the consequences of the government's "Energiewende," or energy transition policy. It has meant the percentage of electricity generated by renewable sources has significantly increased. But at what cost?

The precise answer is €160 billion ($180 billion) in the past five years! And the result is the highest energy prices in Europe. This has not just hit private consumers hard, but the German economy overall. Even so, we still can't get this damn carbon dioxide level to go down. So now we have to introduce a transportation transition policy, too.

It's worth asking whether our carbon footprint could have been improved if we had taken the €160 billion — or at least a large part of it — and stuck it straight into infrastructure investment. It would surely have been a more direct and efficient way of doing things. Especially with transportation now being fanatically targeted by Germany's environmentalists as the apparent cause of all climate evil. Never mind that it only accounts for 18 percent of all carbon pollution.

What Green Party functionaries are currently spouting is enough to make anyone break out in a cold sweat: a ban on short-haul flights, a ban on combustion engines by 2030 — hooray for ecological socialism!

How about a market-based approach, such as a fair market price for CO2?

On top of everything else, we now get a climate cabinet, where ministers sit in detention because they aren't capable of working across departments to reach climate change targets. The whole thing will get even more hilarious when, as planned, ministries start having to pay fines if they fail to achieve their goals.

A climate cabinet? More like a clown cabinet. The only thing they're missing are invites for the new, young climate stars like Greta Thunberg or her German incarnation, Luisa Neubauer. That would be the cherry on the top of this whole hypocrisy.

Please don't misunderstand me. I think it's fantastic that young people are taking to the streets to voice their concerns. In schools and in the media they get a daily dose of fear about the impending apocalypse. One of the key messages of climate populists is that we are driving our planet over a cliff. These climate populists stand out amongst the crowd of climate researches thanks to their continual media presence. But whoever argues like this does not listen to dissenting views.

If climate researchers think they have won allies with the "Fridays For Future" movement they are wrong. These young people are merely victims of a large, self-inflating climate bubble. In reality what is behind the bubble is something much more fundamental. It is a blatant critique of the dominant capitalist economic system, which is supposedly to blame for the planet going over a cliff.

I really can't abide these climate scaremongers. It's not got anything to do with denying climate change. It's about being able to form your own opinion and see what you can do yourself. I agree with the great Swedish scientist Hans Rosling. His book "Factfulness" is one of the most optimistic books of the last decade. He wrote: "When people tell me we must act now, it makes me hesitate. In most cases, they are just try to stop me from thinking clearly."

You can't say it better than that.

US, allies hit Myanmar with sanctions on coup anniversary 1h ago