EU backs start of trade talks with US

European Union member nations have paved the way for the beginning of formal trade negotiations with the United States. The move comes amid a threat by Donald Trump to impose tariffs on the EU over Airbus subsidies. 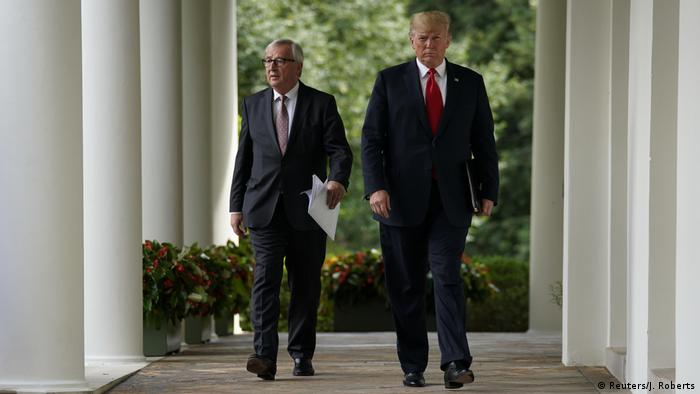 The European Union can now begin trade negotiations with the United States after its member states on Monday voted by a clear majority to approve the negotiating mandates put forward by the European Commission.

The EU currently has a tense trade relationship with Washington, with Donald Trump threatening to levy tariffs on car imports and other European products.

European Commissioner President Jean Claude Juncker lauded the decision by EU member states, saying the EU and the US would enter "a new phase" of their relationship.

European Trade Commissioner Cecila Malmstrom told a press conference on Monday that the EU is "ready as soon as they are" and said she would contact the US as soon as they wake up.

"If we agree to start, I think it can go quite quickly," Malmstrom said. "We are definitely determined to do everything we can to finish this during the Juncker Commission" — Juncker's term ends on October 31. The commissioner specified, however, that ultimately a deal should be limited to industrial goods and a simplification of complicance checks, which will make life easier for companies on both sides of the Atlantic. Agricultural products and public tenders were expressly left out of issues on the table, Malmstrom underlined.

Limited trade deal: Juncker and Trump agreed to pursue a limited trade deal during the European Commission president's trip to Washington in July of last year. Trump has since accused the EU of dragging its feet and has threatened to impose tariffs on auto imports, though Juncker insisted in February that the US president gave his "word" that he would not. The Commission put forward its negotiating mandates in January, but the EU's executive body needed the backing of member states to begin talks with Washington.

Airbus-Boeing dispute: Last week, Trump ratcheted up his trade threats, saying the US would levy new tariffs worth €11 billion ($12.5 billion) over EU subsidies for Airbus. The EU reportedly intends to counter that tariff hike with a €20 billion one of their own. The US and EU have accused each other of illegally subsidizing their respective aviation giants, Boeing and Airbus, for more than a decade.

Resistance from France: Concerned about domestic blowback from the trade negotiations, France had led the charge against the opening of trade discussions with the US. It had sought to push the issue beyond EU parliamentary elections, scheduled for May 23-26, claiming that dealing with Trump could impact the vote. French President Emmanuel Macron has also insisted the US first sign back with the Paris climate accord, from which Trump withdrew the US in 2017.

French President Emmanuel Macron is on a state visit to Washington. This week's visit should mark the end of a quarrel between the two countries, and could also underscore a certain Franco-German entente.

Ever since Washington started offering billion-dollar incentives for high-tech companies to relocate to the United States, Europe has been in panic mode. But do they need to be? We look into all the EU offers.