A history of German cuisine (and chow)

German food historian Ursula Heinzelmann tells DW why people used to thicken sauces with bread instead of cream, and how soccer changed Germany’s attitude toward its national dishes. 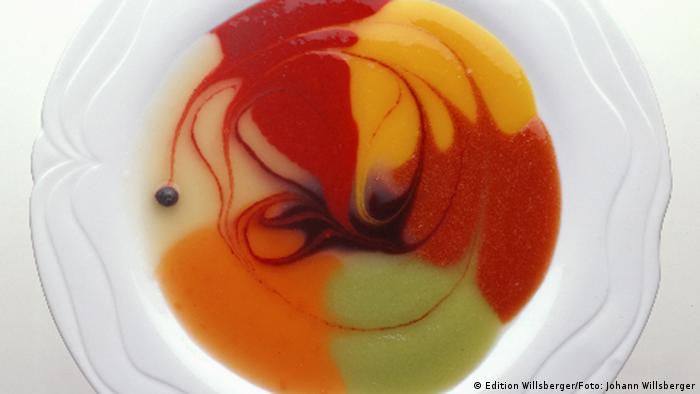 After a successful career in the culinary realm, which includes operating a restaurant in Lake Constance in southern Germany and running a cheese and wine shop in Berlin, Ursula Heinzelmann transitioned into food writing by translating books into German for her husband, wine writer Stuart Pigott. She's gone on to create a niche for herself as a food expert, with a handful of successful books and a column for the Sunday Frankfurter Allgemeine newspaper.

DW sat down with Heinzelmann to discuss her latest book, "Bratwurst & Beyond: A History of Food in Germany," which explores the history of Germany through the lens of food, from gruel in the Neolithic Age to the advent of refrigeration and modern cuisine. Along with historical information, recipes and photographs, the book also includes recommendations for culinary experiences in particular locations, such as a 12th-century bratwurst eatery in Regensburg.

DW: Tell me about "Beyond Bratwurst." How did you come up with this project idea?

Ursula Heinzelmann: Well, the project came to me. I've been attending the Oxford Symposium on Food and Cookery since 2003 and, well, you build up a network. I had done a book on the food culture of Germany before for an American publisher, and I was asked [by Reaktion Books] if I wanted to do it. You don't get this kind of offer twice I think.

I think the title is a good concept: a history of food in Germany. It was up to me, more or less, what I made with it. 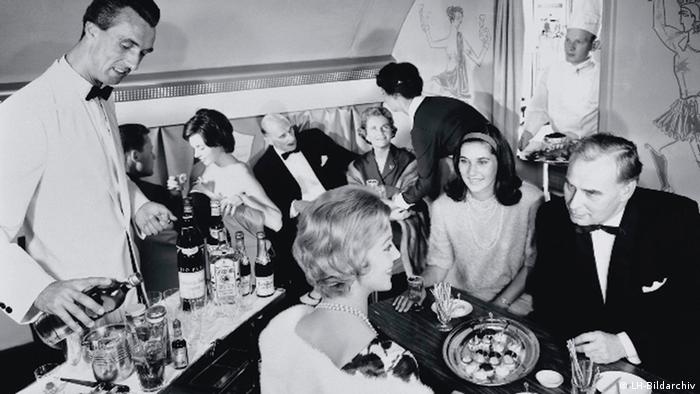 In 1958, Lufthansa made cuisine a central part of its first-class service

The book more or less ends at the Markthalle Neun, a food market in the Kreuzberg district of Berlin. How does the growth of Markthalle Neun reflect the changes you've found in the entire history of German cuisine?

Let's just look at Germany since the Second World War. In the difficult first years after that - and I'm speaking more or less from a West German perspective, as I grew up in West Germany - Germans had a real problem with their national identity. It just wasn't terribly cool to be German. With the economic recovery, which set in quite soon after the war, people could travel, they could afford imported food, and even when I grew up in the 60s and 70s, it always felt like you'd much rather be Italian or French than German. So you ate your coq au vin, your camembert, your pizza, and your mozzarella, almost pretending that Berlin was actually situated on the Mediterranean.

I spent three months in Washington, D.C. after my final exams in school, and it was just the same old problem. Being German, the first thing that came out was sauerkraut, and okay I could live with that. And then it was Hitler and the Third Reich, and I thought, oh why couldn't I just be someone normal.

But, you know, time does a lot to people. And somehow for me the turning point came with the World Cup in 2006, which took place in Germany. It was brilliant weather, and I had thought, oh my god, it will be horrible with all those football hooligans here, in Berlin especially. But it was just one big happy party. And for some reason, it made people realize that it was totally okay to wave a German flag, that you weren't a hard-core nationalist for doing that. And since then - also there are a lot of other reasons - people have come to terms with the fact that it's okay to be German. The past is not a cloud in the sky. And of course, this is also part of the global regional food movement and all that. 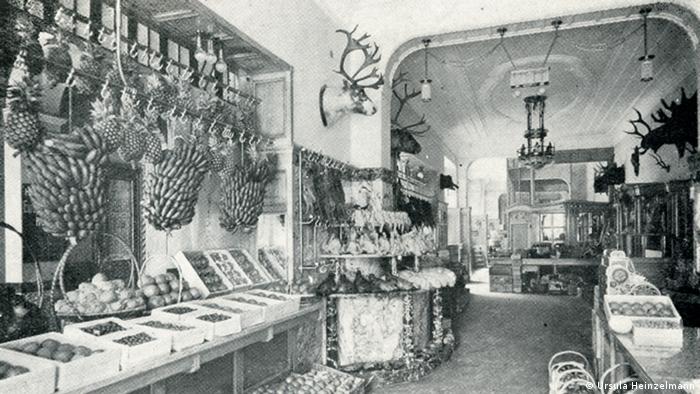 The Fehér delicatessen store in Berlin is depicted around 1910

When you decided to take on this book project, how did you tackle the task of finding the details on the history of food in Germany?

There is actually quite a lot on record. When you think about it, people eat all the time. If they didn't, then there wouldn't be a book. Of course, the sources change with time; you have to look at archeology, and of course the sources tend to be sparse the further back you go. At the beginning, I really have to look at central Europe and just guess, and suggest perhaps it might have been like this, it might have been like that. But you see a certain continuity. And of course once you get written sources, you have so much then. If you stop thinking about food as just cuisine but as really foodstuffs, then you are looking at the history of Germany really from a food view.

My focus changes with the sources, with the time. I made a special point - I felt it very important - to also look at famines. That's part of the history of food just as much as eating or recipes. I also looked at the contrast between different social groups. Not only what people ate, but how they prepared it. And of course this is all interrelated: who could actually move about and how did they move foodstuffs about. So you are looking at trade, you are looking also at famines, then you are looking at weather patterns, and you very quickly have a picture. Of course, the library became my second home for a certain amount of time.

What are some of some of the really interesting facts you uncovered in your research for this book?

I think the answer to this has to be that I realized that the Nazis appropriated many earlier ideas, amongst them from the Life Reform Movement, including biodynamic agriculture. This is important to know because nowadays biodynamic farmers are sometimes accused of siding with extreme right-wing movements due to that historical link, which was, however, one-sided. It is as if one would say that Vollkornbrot, whole meal bread, is a fascist or extreme-right thing to eat just because it was promoted by the Nazi regime. 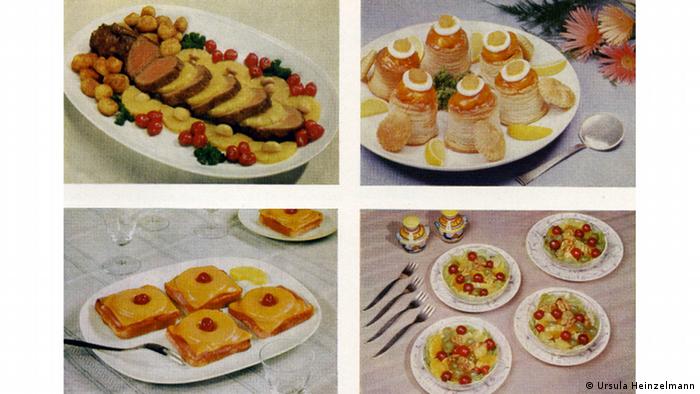 In the 1960s, it was popular to eat anything non-Germany, including Toast Hawaii

The book also has a selection of historic recipes. How did you source these, and can you tell me about one of your favorites?

They are from historic cookbooks, for example a 16th-century Augsburg women's handwritten cookbook. One shouldn't call it a cookbook, really; it's more like a recipe collection.

The way they used to use bread as a binding agent is rather interesting. I always thought before, oh, this sounds unappealing. It doesn't sound delicious like cream or butter. And of course cream used to be a real problem, because there wasn't that much around, so they preferred to use it to make butter, and it was very perishable. Bread would keep way longer and was more affordable.

I always would look at those recipes, but for some reason I would never try them. Historic recipes are a tedious thing. And then I looked at them again for this book and I thought, hey, wait a moment; you just go to the kitchen and you try this. And it worked so well. It's actually really delicious.

As in using the bread to bind a sausage or a pâté?

No, binding a sauce with bread. It depends on what kind of bread you use, but it more or less dissolves, and gives you a very nice sauce. And what made me try it actually, was a recipe from Sabine Welserin [Eds: Welserin authored the 16th-century cookbook mentioned above]. In one of her recipes she uses a kind of gingerbread, Lebkuchen, and it connects with the story of Lebkuchen in Germany. There is still a tradition in some eastern parts of Germany and Poland nowadays, where you cook a carp a certain way and you use a special kind of gingerbread to bind the sauce. It sounds weird, but it is very good. It melts completely and it gives you a very nice texture and very good taste. It is actually not so different from doing a classic roux. 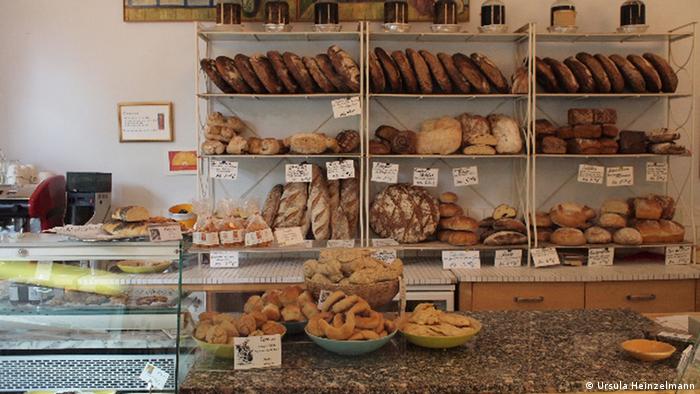 Heinzelmann comes full circle, ending her book in Berlin, where organic and whole-grain foods are in trend

You also give recommendations in the book that provide a historical experience of cuisine. Tell me about these "Culinary Places in Time."

You asked about recipes before. I thought, this is so obvious, everyone does that. You open a book that is somehow food related and it includes recipes. I have those recipes, but more original and more interesting, I think, is that I give places of food and time - places that still exist, where you can go today and experience a certain period in the German food history.

For instance in Lübeck, near the Baltic Sea, there is the Schiffeergesellschaft. This used to be - and it still exists - a kind of society of seafaring fishermen and their families. It started as a kind of welfare or insurance thing to take care of the group, and then they built this kind of hospice, which also included a restaurant. And this restaurant is still around, and it's totally wonderful. It looks like a church with dark wood panels and with all kind of memorabilia.

And also, for instance, I talk about Martin Luther's household as an example of how somebody of his background would have lived, how the kitchen would have been organized, what he took care of and all that. And then I give you the Luther house in Wittenberg as a destination, or there is this very historic bratwurst house in Nuremberg - places like that. I think if you combine the location with the information about the past, then we get a really good picture.

"Beyond Bratwurst" comes out on April 14 in the United Kingdom. Find out more on Ursula Heinzelmann's homepage.

Berlin has a huge Vietnamese population, shaped by city's own historical division. DW's Elizabeth Grenier immerses herself in the local sub-culture, on a hunt for the best Pho soup. (27.03.2014)

Call it Central European soul food. As the mercury falls, Berliners seek out restaurants serving traditional food to pack on a few pounds for the winter. Old-school cuisine has the stuff to become a big new trend. (12.12.2013)