German carmaker Volkswagen and US authorities are expected to reach a settlement agreement, which might make it clear for the first time how much the "Dieselgate" emissions-cheating scandal would cost the company there. 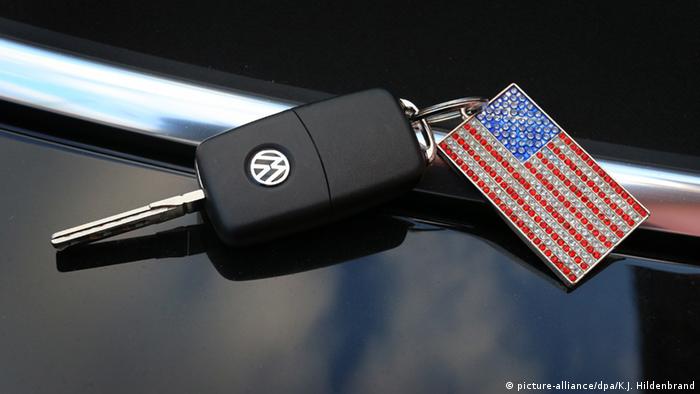 The automotive industry, environmentalists, investors, plaintiffs and above all Volkswagen - they all will be earnestly looking toward California on Tuesday. Because this is the day that marks the deadline set by the San Francisco District Court for the German carmaker and US authorities to present a settlement agreement.

The deal, including the compensation VW will pay for its emissions-cheating scandal, is expected to be struck out of court. The agreement would provide the basis for resolving over 600 class-action lawsuits filed against the company by car owners. If no agreement is reached, District Judge Charles Breyer could initiate legal proceedings.

Given the large number of claims, it is good to avoid a multitude of individual cases that would drag on for years, says Ferdinand Dudenhöffer, a professor of automotive management at the University of Duisburg-Essen. "The agreement reached might be painful, but it brings calm to the company and allows it to focus on its future," he told DW.

How much will VW have to pay?

VW admitted in September last year that it had installed cheating software in its diesel cars to rig emissions tests. Around 11 million vehicles worldwide were affected by the scandal.

It is yet unclear how much money VW will put on the table. But there is a lot of speculation about the potential figure, with most analysts saying the Wolfsburg-based carmaker will have to shell out at least $10 billion (9 billion euros). But the latest reports suggest the carmaker may face a bill of up to $14.7 billion to settle claims. Bloomberg reported that VW could pay each of the company's about 480,000 affected customers up to $7,000. The "Wall Street Journal," on the other hand, puts that figure at around $10,000. Volkswagen, however, has so far not made any announcement on this front.

In April, VW and US authorities had already agreed on the main elements of the deal, including buybacks of almost half-a-million of the affected vehicles and substantial compensation payments for the car owners. The agreement also foresaw the setting up of two funds to remedy the environmental damage as well as to promote environmental-friendly cars.

But that will not be the end of the company's legal troubles, as each claimant can individually decide whether or not to accept the offer. If they don't agree with the offer on the table, they can proceed further with the legal process. And other penalties and fines may also be imposed by US authorities. Furthermore, claims for damages by investors for having to suffer losses on account of the scandal are not off the table.

Seeking to avoid a major trial in the US, Volkwagen has set up a massive fund to pay up for Dieselgate-related damages in the US. The US Department of Justice has called for a plan to be finalized by the end of July. (23.06.2016)

Moreover, the settlement will not apply to all the vehicles affected by the scandal, because in addition to the 2.0-liter diesel engines, there are some 110,000 3.0-liter cars in which the firm's subsidiary Audi admitted to having used illegal software.

There are also lawsuits from other parts of the world. In Europe alone, VW recalled around 8.5 million vehicles last October. Even though the number of VW cars equipped with defeat devices is 14 times higher in Europe than in the US, it is expected to cost the company much less on the Continent than on the other side of the Atlantic.

That is because the emissions standards here are less stringent than in the US. In this context, automotive expert Dudenhöffer criticizes EU Internal Market Commissioner Elzbieta Bienkowska, who has called on Volkswagen to pay European car owners similar compensation to what the company was expected to pay US customers.

"The legal basis in Europe is different from that in America. In Europe, consumer law and environmental law are irrelevant," the analyst said.

In its 2015 balance sheet, VW set aside around $16 billion to cover the costs arising from the cheating scam. "There will be large sums involved, but VW can bear the cost," said Dudenhöffer.

The expert pointed out that for the company to remain profitable in the long term, it is important to implement the announced restructuring of the firm. The recently unveiled "Strategy 2025" by CEO Matthias Müller foresees a shift away from the infamous diesel engines toward increased electric mobility.

It is likely to take some more time for the true cost of the "Dieselgate" scandal to become clear.

While Judge Breyer is expected to express his general views on the settlement offer on Thursday, the next hearing date is scheduled for July 26.