The House of Representatives has voted to ban visa waivers for people who have traveled to Iraq and Syria. There's widespread concern that "Islamic State" operatives could enter the US on European passports. 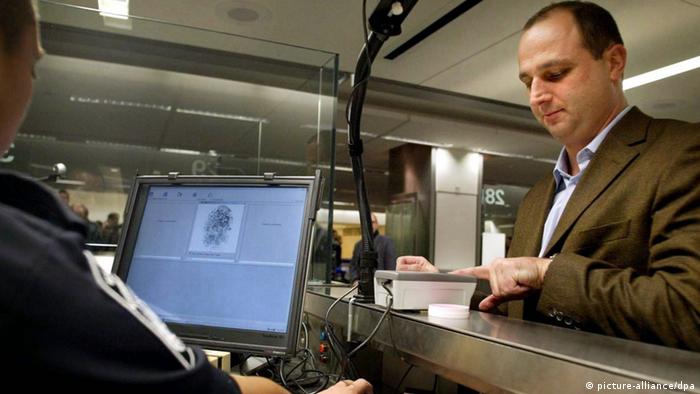 On most days, Congress can hardly agree on anything. Tuesday was different. More than 90 percent of the House of Representatives voted to exclude from the visa waiver program people who have traveled to Iraq and Syria since March of 2011. Only 19 opposed the measure.

Thirty-eight countries participate in the waiver program, which grants 90 days of travel in the United States without a tourist visa. Thirty of the 38 participating countries are European. Some 20 million tourists receive visa waivers every year.

In the aftermath of the November 13th terrorist attacks in Paris, concern has grown that operatives from the so-called "Islamic State" (IS, or ISIS) group could enter the United States on European passports. At least six of the Paris attackers were French or Belgian nationals who had spent time in IS-held territory.

As many as 5,000 Europeans have gone to fight in Syria's civil war, according to a report published by the Soufan Group, which advises governments and multinational organizations on security matters.

Paris estimates that 1,800 French nationals have joined jihadist groups worldwide. By comparison, 760 UK citizens, 760 Germans and 470 Belgians have gone to Syria. According to the FBI, 250 Americans have traveled or attempted to travel to IS-held territory.

"This is a common sense way to try and mitigate some of the risk that has risen from the rise of ISIS and the foreign fighter problem," David Schanzer, an expert on US domestic security at Duke University, said of the new visa waiver restrictions.

"It would be an overreaction to do something like end the visa waiver program based on the problem of foreign fighters coming from Iraq and Syria back to Europe," Schanzer told DW.

Historically, the threat of terrorist operatives manipulating the visa waiver program has been low, according to Brian Jenkins, an expert on US domestic security at the RAND Corporation.

Over the past 25 years, three terrorist operatives have been arrested after entering the United States through the visa waiver program - Ahmed Ajaj, Zacarias Moussaoui and Richard Reid.

Ajaj was initially arrested for entering the United States on a forged Swedish passport in 1992. He was later convicted of participating in the 1993 World Trade Center bombing.

Moussaoui was arrested on immigration charges a month before the September 11 attacks, having raised suspicion at a flight school in Oklahoma. He was later convicted of plotting terrorist attacks against the United States. Moussaoui entered the country on his French passport.

Reid, a British citizen, tried to ignite explosives packed into his shoes on a flight from Paris to Miami in December of 2001.

In total, 182 people carried out or were arrested for plotting to carry out terrorist attacks in the United States since 1990, according to Jenkins. The overwhelming majority of them didn't need visas at all. Ninety-six were American citizens and 19 were legal permanent residents.

"We can have some confidence that we are able to identify and intercept those who are coming here for purposes of terrorism," Jenkins said. "It's easier to do that than identify those who are already here and may be radicalizing themselves. We don't have an x-ray for a man's soul."

In the case of the attacks in San Bernardino, Syed Rizwan Farook was a US citizen and his wife, Tashfeen Malik, entered the country on a so-called fiancée visa. She was a Pakistani national who lived in Saudi Arabia for an extended period.

In a televised address on Sunday, President Barack Obama advocated stricter controls over visa waivers. During his speech, the president incorrectly stated that Malik traveled to the US through the program, according to the Los Angeles Times.

In the aftermath of San Bernardino, Republican presidential frontrunner Donald Trump called for all Muslims to be banned from entering the United States. His comments were widely condemned across the political spectrum. Ben Carson, now in fourth place in the Republican contest, has called for all visitors to the US to be monitored.

"Everyone visiting our country should register and be monitored during their stay as is done in many countries," said Doug Watts, a Carson campaign spokesman. "We do not and would not advocate being selective on one's religion."

According to Jenkins, the threat of terrorism is real, but should be put in context. Since the September 11 attacks, which took nearly 3,000 lives, approximately 60 Americans have been killed by terrorism - four a year. Meanwhile, more than 14,000 Americans are murdered every year.

"There is a lot of fear right now," Jenkins said. "The fear to a certain extent is probably being elevated as a consequence of the political campaigns going on."