Prominent Turkish journalist and author Ahmet Sik has been detained in Istanbul. Sik is a sharp critic of the government and the Gulen movement, which the government blames for July's failed coup attempt. 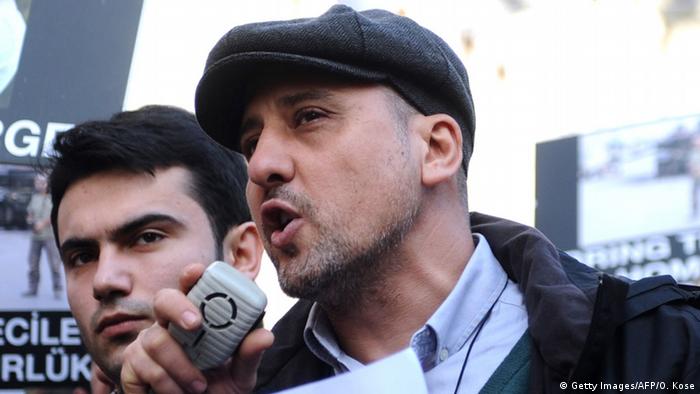 Investigative journalist and author Ahmet Sik announced on Twitter on Thursday morning that he had been detained.

"I'm being detained. I'm being brought before a prosecutor for tweets," Sik told his 555,000 Twitter followers.

It was unclear what tweets led to his detention, but he is a sharp critic of President Recep Tayyip Erdogan and his ruling Justice and Development Party (AKP). He has often likened Erdogan and the ruling party to fascists.

"God will change, the only religion that doesn't change is fascism," wrote Sik in a pinned tweet.

Baris Yarkadas, an Istanbul lawmaker for the opposition Peoples' Republican Party (CHP), said Sik told him he was being investigated on terrorism-related charges.

State-run Anadolu Agency reported Sik was being questioned for "publically denigrating the Turkish Republic, the judiciary, military and security services" and for "making terrorist propaganda."

Sik is best known for his investigative work into the shadowy network of US-based Islamic preacher Fethullah Gulen, an ally-turned-foe of Erdogan who the government blames for the July 15 failed coup attempt. The government accuses Gulen of infiltrating the state bureaucracy, military, police, judiciary, media and other institutions over nearly three decades to form a "parallel state structure."

Erdogan's longtime association with Gulen and his movement, before the two had a falling out over a corruption scandal in 2013, has had the government backpedaling to explain how and why it worked hand-in-hand with a group it has now labeled a terrorist organization.

In an October tweet, Sik said: "The Gulen movement and AKP are both complicit in crime. Fethullah Gulen and Recep Tayyip Erdogan should be tried together."

In 2011, Sik was sentenced to a year in prison and a book he wrote about the Gulenist infiltration of the state in cooperation with Erdogan titled "The Imam's Army" was confiscated and banned. The European Court of Human Rights in 2014 ruled Sik's freedom of speech and right to a fair trial has been violated and ordered Turkey to pay 10,000 euros ($10,450) in compensation.

Turkey has detained thousands with alleged links to the Gulen movement – a religious network that spans the globe. Students often live in shared flats, so-called lighthouses. Naomi Conrad gained access to one of them. (16.12.2016)

Thirteen others were also on trial in the so-called Oda TV case, part of a broader trial against an alleged military coup plot known as Ergenekon. Erdogan and Gulenist prosecutors led the charge in those multiyear trials aimed at clipping the wings of the secular military establishment and silencing critics. Several hundred military officers, opposition politicians, academics and journalists were convicted.

At the time, critics of the trials pointed to widespread evidence fabrication and distortion. The verdicts were ultimately overturned by Turkey's top court and Erdogan later claimed he had been tricked by Gulenists.

Using sweeping state of emergency powers granted in the wake of July's coup attempt, the Turkish government has arrested 40,000 people and dismissed or fired tens of thousands more over their alleged ties to the Gulen movement. The crackdown has morphed into a wholesale assault on the opposition and critical voices.

At least 81 journalists are in prison in Turkey, mostly on anti-state charges, according to the Committee to Protect Journalists, making the country the world's worst jailer of journalists. The Turkish Journalists' Associaton puts the number of journalists behind bars at nearly 150.

Another 1,656 people have been arrested in the past six months for allegedly supporting terrorist organizations or insulting officials on social media, according to government figures. Another 10,000 people are under investigation for social media activity.