Two reporters for the Turkish branch of German newspaper Tageszeitung were detained and had their homes searched in Ankara. The arrests were part of a wider clampdown on critics of Turkey's military operation in Syria. 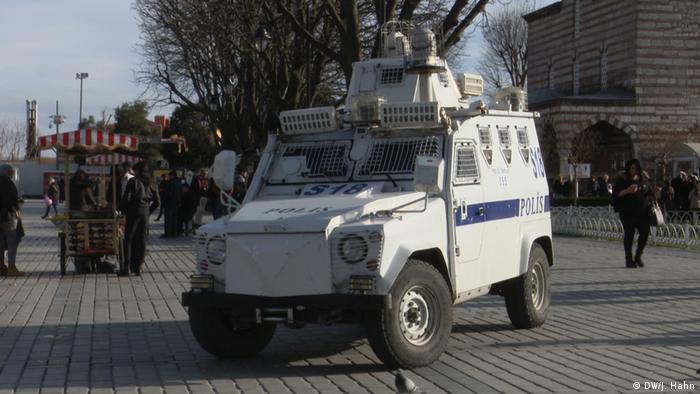 The German daily Tagezeitung said on Tuesday that journalists from its Turkish publication Taz Gazete had been arrested by anti-terror police.

"As we write, the Ankara apartments of journalists who took positions against the war in Afrin are being stormed and searched," the newspaper wrote on Twitter, referencing Turkey's decision to send ground troops into Kurdish areas of Syria.

"Among them are our writer Hayri Demir and Sibel Hurtas of Arti Gercek," the statement continued, "in the same context the journalist Idris Yilmaz was arrested in Van and Nurcan Baysas and Ishak Karatas were detained in Istanbul."

Taz Gazete journalist Ali Celikkan told DW that Demir and Hurtas were arrested shortly before midnight "for posting information on social media from local sources in Afrin that contained alternative rhetoric to that of the government."

"They were also hosting online discussions featuring activists and lawmakers that are against the war."

According to Celikkan, Taz Gazete contributor Demir and Hurtas are in a three-day detention period and have not been formally arrested, but remain under suspicion of "inciting the people to violence."

"This is part of a larger wave of arrests of anyone who speaks out about peace. It's hard to pinpoint how many have been detained, but it's at least 50."

"Everyone is worried they might be next," said Celikkan.

"There are already more than 150 journalists in jail in Turkey and they are being prosecuted because of the news they made," he said. "If you say on Twitter you are against this war — you might be trialed as well."

Turkish authorities are reportedly highly concerned about opposition to its new military mission in Afrin, particularly how social media could be used to spread that opposition.

DW's Dorian Jones in Istanbul said that Prime Minister Binali Yildirim called journalists to a meeting on Sunday to lay out a 15-point plan on how the operation in Afrin should be covered in order to quash any criticism of the move.

The Turkish public is generally uninformed about the mission in Syria and has limited access to information, according to Guc.

"Nobody really knows what is going on in Afrin right now," he said. "People only know what is being broadcast on pro-government channels."

There were dozens of arrests made on Monday night and early Tuesday over opposition to the Afrin mission, which were seen as part of a wider crackdown on press freedom in Turkey. On Monday, Ankara announced that rallies and protests were temporarily banned in the capital until the Afrin mission is finished.

Officials said they were trying to stop the spread of "terror propaganda." Besides the journalists, many pro-Kurdish activists were detained, including the head of the Kurdish Peoples' Democratic Party (HDP) in the city of Izmir.

"She has been detained in connection with her tweets calling for peace and condemning the Turkish government’s military incursion in the northwest Syrian enclave of Afrin," Sinclair-Webb wrote in a statement. Baysal was arrested for advocating violence, but, as HRW points out, "nothing in Baysal’s tweets advocates violence. If anything, it’s the opposite."

Government prosecutors accuse those working at the country's leading newspaper of supporting terror organizations. The journalists accuse the government of using the courts to stifle the independent press. (25.12.2017)