Trump and Merkel to talk NATO, Ukraine and climate change

It will be the first face-to-face for the leaders since Trump repeatedly criticized Merkel's refugee policies. White House officials expect the two will look forward, not back, as they discuss a host of pressing issues. 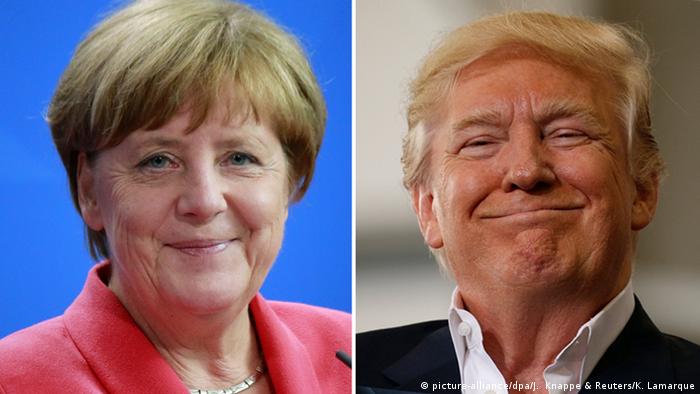 After accusing German Chancellor Angela Merkel, on the campaign trail, of "ruining Germany" by welcoming refugees, US President Donald Trump will have his first face-to-face meeting with the German leader at the White House on Tuesday.

The two are expected to discuss strengthening the NATO alliance, collaborating in the fight against terrorism and taking steps to resolve the conflict in Ukraine, White House officials said Friday.

More broadly, Trump's first encounter will be aimed at building a personal rapport with a European partner who was among former President Barack Obama's strongest allies and international confidantes, according to the officials, who briefed reporters on condition of anonymity despite the president's recent criticism of anonymous sources.

They are expected to discuss Germany's level of defense spending for the NATO alliance, the Ukraine conflict, Syrian refugees, the European Union and a host of other issues, said three senior administration officials who briefed reporters.

"My expectation is that they'll have a very positive, cordial meeting," said one of the officials.

Trump has long expressed a desire for warmer US relations with Russia but some of his top Cabinet officials are skeptical.

"We are heartened by the German government's determination to reach NATO's benchmark of committing 2 percent of GDP to defense by 2024," the official said. "The president believes that all allies must shoulder their share of the defense burden."

In 2014 NATO's 28-member countries committed to reaching the spending target within a decade but only the US and four other members of the post-World War II military alliance are in compliance.

Trump referred to NATO as "obsolete" prior to his inauguration. But he has since told European leaders he agrees on the "fundamental importance" of the alliance.

Many European allies have been rattled by Trump's positive statements about Putin and next week's meeting will come amid questions about Trump associates' connections to Russia.

The White House said Trump and Merkel might also discuss the Paris accord on climate change. Trump vowed during his campaign to withdraw from the climate agreement, suggesting that global warming is a hoax created by the Chinese.

But the administration is still formulating its policy on the issue ahead of the G7 meeting in Italy in May.