The trust economy on display at vibrant MoneyConf | Business | Economy and finance news from a German perspective | DW | 13.06.2018 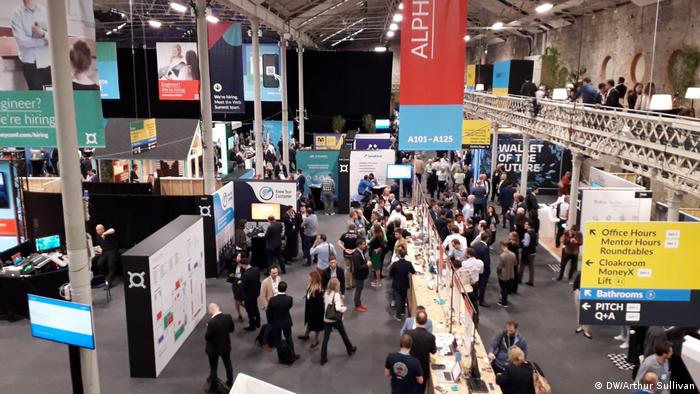 "Trust me, I'm a fintech founder and CEO."

It might not quite have the same ring to it as the old line about doctors, but nonetheless that sentiment was discernible at MoneyConf.

Right from the start of the day in Dublin when Paddy Cosgrave — CEO of Web Summit, the organizing body behind the event — asked all attendees to turn around and start talking to the strangers around them, trust was the operative word.

In many ways, this week's vibrant event reflects the rapid growth that the industry loosely known as "fintech" —  that nascent coalition of financial services and tech — has made in a few short years.

The growing credence being lent to cryptocurrencies, the increasingly detailed plans being made in mainstream business circles around blockchain technology and machine learning and the growing strength of a wave of innovative fintech companies working in areas from banking to secure payments has given the area considerable heft. Hence the reason why this is the first topic to be given its own individual conference spin-off by the Web Summit people.

Yet perhaps conscious of the scandals that have bedevilled tech giants such as Facebook and Google in recent times, and naturally of the perfidious forces behind the 2007 financial crisis, the elites of the fintech world are preaching a creed of faith as they look to muscle in further on the traditional financial market.

One telling moment came during an early panel discussion on the main stage titled "Open Banking: Power to the people." Valentin Stalf, the founder and CEO of the fast growing Berlin-based online bank N26, said he felt trust had drained away from traditional lenders.

"The trust is not with the banks," he said.

He was sharing the stage with JP Rangaswami, the chief data officer of Deutsche Bank, a 148-year-old embodiment of traditional banking. "Banking has always been about trust," Rangaswami fired back. "The word bank comes from banca, meaning a bench and bankrupt means a broken bench. The word for credit comes from belief. The essence of banking is and always has been trust." 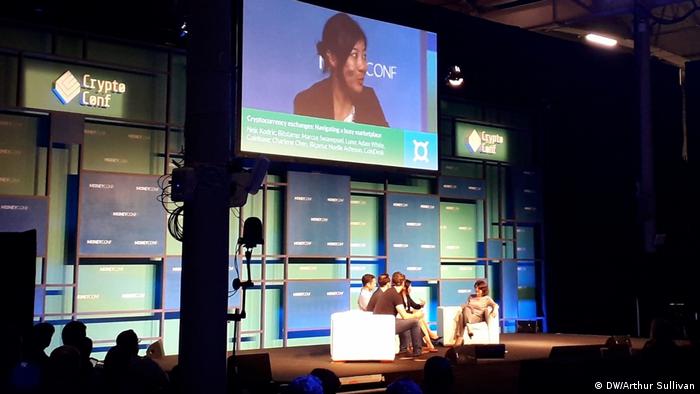 It was a fitting snapshot of a compelling day which neatly corresponded to MoneyConf's own description of itself as the place "where the world's leading banks, tech firms and disruptive startups meet."

Meet they do. Although this event is much smaller than its mothership Web Summit, the main hall was still a hive of activity as more than 5,000 investors, CEOs and business owners moved from stall to stall and stage to stage. In effect, this is a music festival for tech whizzes and entrepreneurs.

In a nod to its growing status as the grand narrative of fintech, there was a separate stage dedicated to cryptocurrencies. CryptoConf, which was packed with attendees throughout the day, featured some interesting discussions, from how blockchain could yet revolutionize Wall Street to cryptosecurity and advice on the best place to store your digital currency — if you are lucky enough to have some.

The great and the good of the blockchain and cryptocurrency universe were there (OK, not Satoshi Nakamoto...or maybe he was?) but the headline act was undoubtedly the somewhat enigmatic Joseph Lubin, the Canadian founder of Ethereum, a decentralized cryptocurrency platform which generates the cryptocurrency Ether.

His keynote address on the main stage was an insightful look into the whole area of blockchain but he too was emphasizing the importance of trust above all else. "This is automated, guaranteed trust," he explained. So, not "trust me, I'm a doctor" but rather, "trust me, I am a mathematical equation."

Karma you can believe in

Another impressive presentation came from Sarah Friar, the chief financial officer of Square, the San Francisco-based financial services company that is shaking up the payments industry. She argued eloquently for more diversity in the area of tech and fintech, noting the relative paucity of women in the realm at present and emphasizing that companies with strong female representation "simply do better."

But she too brought up the T word. "Our brand is one of trust," she said. The marketers will be busy coming up with original ads if this continues.

Wednesday, the final day of the three-day event, will feature several more intriguing discussions, with the keynote to be delivered by Kenneth Lin, CEO of Credit Karma, on the topic of "autonomous finance," something he says is comparable in scope and potential to autonomous driving.

Lin's personal finance company, which helps consumers find more efficient lending arrangements, is just over a decade old but already has an incredible 80 million customers in the US. He believes that is a reflection of the trust they have already built up but he agrees that others in the fintech sector and start-up sector generally have noted the importance of making trust the core value in the digital age.

"When you look at the erosion of trust in financial services companies over the last 10 years or so, whether it was a hack of the PII or the Wells Fargo scandal, there has been that erosion over the years and I think it is important for us to stand up for that," he told DW. "To say: hey, there is a company that you can believe in."

Going by the positive vibes in the air at MoneyConf, it would appear that there are plenty who share his faith.