The death of America′s net neutrality and how it affects you | Business | Economy and finance news from a German perspective | DW | 11.06.2018

The death of America's net neutrality and how it affects you

The US and EU are changing the internet but — toward polar opposite ends. The United States has buried landmark net neutrality laws. Lindsey Rae Gjording reports from New York. 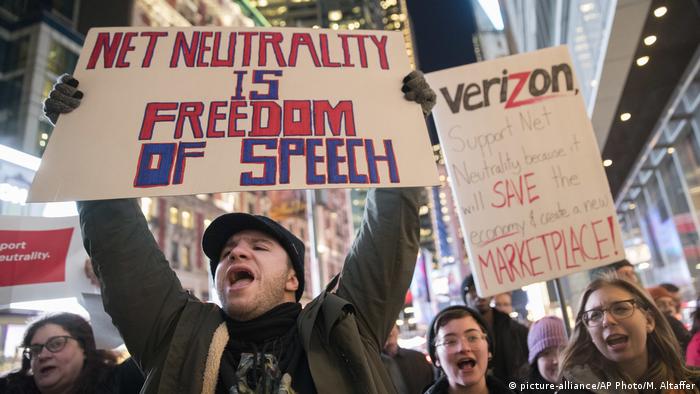 The US stopped its landmark net neutrality rules on June 11. Without net neutrality, internet service providers in the US are free to manipulate or limit internet access to certain websites while favoring others. This can affect anyone who visits American websites. But defenders of net neutrality fear an even worse outcome: censorship.

"It's the principle that the companies we pay to get online shouldn't be the ones who influence our choices to what we do online," says Ryan Singel, a fellow at the Stanford Center for Internet and Society. Singel notes that ISPs are wanting to "be able go to a website like Yelp and say: 'Nice website — for 50K a month we will keep letting you get to our subscribers; otherwise, we will block you."

Internet service providers (ISPs) will be free to charge websites for access to reliable streaming and also show preference for their digital content over competitors' content. Who is likely to shoulder these costs? Internet users.

The US did not always have net neutrality. Net neutrality was created in response to the exploitative tactics that ISPs were utilizing. For example, Comcast users trying to stream Netflix found their videos streaming slowly, frequent interruptions and long load times — that is, until Netflix paid Comcast a hefty sum. For ISPs maintaining congested networks, consumers will pressure websites like Netflix for better performance or migrate to competitors' sites. Either way, Netflix pays.

These practices were increasingly common until 2015. Under the Obama administration, net neutrality rules were finally enacted, ensuring that the internet had similar protections as public utilities. This is fitting because ISPs otherwise create "fast" and "slow" lanes, showing preference to those who can pay to be in the fast lane.

"We don't let water companies or phone companies discriminate against customers," said Senate Democratic Leader Chuck Schumer." "We don't restrict access to interstate highways, saying you can ride on the highway, and you can't. We shouldn't do that with the internet either." 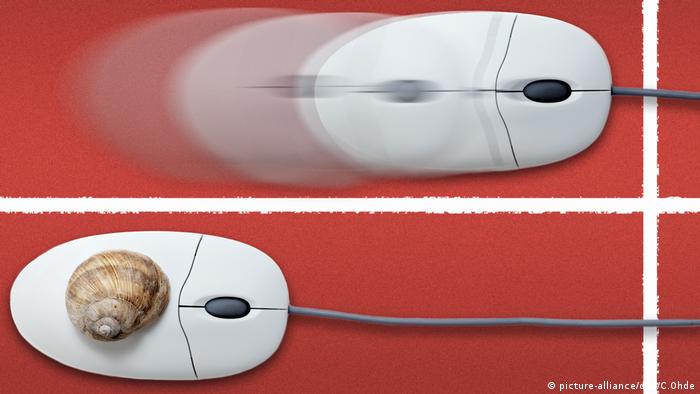 Surfing at two different speeds? Net neutrality is now a thing of the past in the US

Not so fast now

Not everyone liked the idea of a free and open internet — Ajit Pai in particular. Although he is little known, Pai, a former Verizon lawyer, is now chairman of the Federal Communications Commission (FCC) and had made abolishing net neutrality his No.1 goal since Trump took office.

Oddly enough both sides had similar arguments, each seeing the future innovation in jeopardy. Ajit Pai and others believed ISPs were shouldering unnecessary costs and face limited innovation as a result.

"There is significant evidence that investment in infrastructure has gone down since the adoption of these rules," said Ajit Pai in an interview with PBS. While he worries about the future of the physical network, his opponents worry about the internal structure of the internet and potential alterations.

Everyone will feel they need to be in the fast lane, but the ones who can afford it are the big media companies, says Ryan Singel. "If a video doesn't load quickly, you give it about 3 seconds and you bounce, but also what if someone live streaming a protest can't get the video to load."

The big concerns are if it becomes more expensive to be online then the people who are hurt the most are marginalized and disenfranchised voices.

"Stanford has found that net neutrality will hurt small newsrooms," says Ryan Singel." "The things we like now, how you can write and be heard, how you can make and show cool art." It will be small effects that happen over time as ISPs are allowed to abuse their monopsony control over access to users. "The only way to get to a Comcast subscriber is through Comcast."

The repeal of net neutrality falls just weeks after the European Union's massive GDPR (General Data Protection Regulation) took the world by storm. The irony is that while the EU moves forward to empower its citizens in relation to the internet, the US is essentially moving in the opposite direction.

"When the US passed net neutrality in 2015, the EU followed with strong rules as well," said Singel to DW. "Then the US elected Trump and all of a sudden the rules are gone. For a very long time we were setting a good example and now we are the anti-example."

In terms of scope, net neutrality will have less overall impact than the EU's GDPR, but it does mean that European websites aiming for American consumers will go through the same fee structure. Everyone with a stake in the internet is waiting to see how this situation could play out.