The head of the most powerful insurgent group in the eastern suburbs of Syrian capital Damascus was killed in an air raid targeting the group's headquarters. Both rebel sources and the Syrian army confirmed the event. 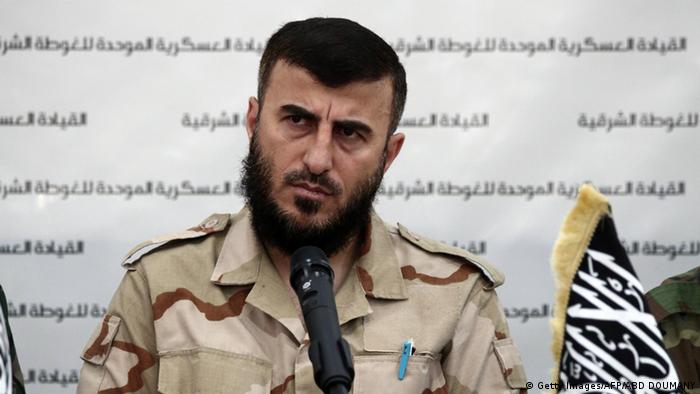 The death of Zahran Allouch, head of the Jaysh al-Islam rebel (Army of Islam) movement, was confirmed on Twitter by Syria's opposition National Coalition, who posted a message of condolence. Jaysh al-Islam is the largest rebel faction in the capital and is said to have between 15,000 to 20,000 fighters. It is also one of the rebel groups that will be negotiating with Assad's government in Geneva next year.

It remained unclear which country had ordered the air strikes. The Syrian Army took credit for the attack and said in a statement that its planes had carried out a "special aerial operation" in eastern Ghotta, which led to the killing of "terrorist Zahran Allouch." The Syrian government has repeatedly referred to Allouch and his group as "terrorists."

But Reuters news agency reported that local rebels had seen Russian planes targeting the secret headquarters of the group. The opposition Syrian National Coalition also accused Russian planes of carrying out the attack. Moscow has insisted that it was concentrating its attacks on the self-declared "Islamic State" group (IS), but a number of rebel leaders have reportedly been killed since Russia began its bombing campaign in support of Syrian President Bashar al-Assad.

The UK-based Syrian Observatory for Human Rights reported that several other members of Jaysh al-Islam had also been killed in the air strike, confirming Allouch's death as well.

The Jaysh al-Islam group has been running the administration of the Eastern Damascus suburb of Ghouta area since 2013, when it was formed by incorporating various rebel units. Much of the rest of the capital, however, remains firmly in President Assad's control.

According to the Lebanon-based Al-Mayadeen TV, 13 airstrikes in total hit eastern Damascus on December 25.

Before setting up Jaysh al-Islam, 44-year-old Allouch had founded Liwa al-Islam (Brigade of Islam), along with his father, Abdallah, a Salafist Syrian cleric based in Saudi Arabia. The younger Allouch represented Salafist interests in Syria and was accused of receiving arms and supplies from Saudi Arabia.

However, despite his Islamist agenda, Allouch was regarded as a moderate among the rebels, as he did not share the ambitions of al Qaeda's militants nor support the self-declared "Islamic State" group (IS). But activists have also previously accused Allouch of kidnapping several prominent figures in the course of the conflict in Syria and being opposed to a democratic process in the country.

Syria is ready to take part in UN-backed peace talks in Geneva. It is hoped the dialogue will help the country form a national unity government and end years of brutal civil war which has seen thousands of people killed. (24.12.2015)