Germany's top diplomat has promised his overwhelmed Greek counterpart his country's backing to handle the influx of refugees. Athens has already been struggling to implement cost-cutting measures required by creditors. 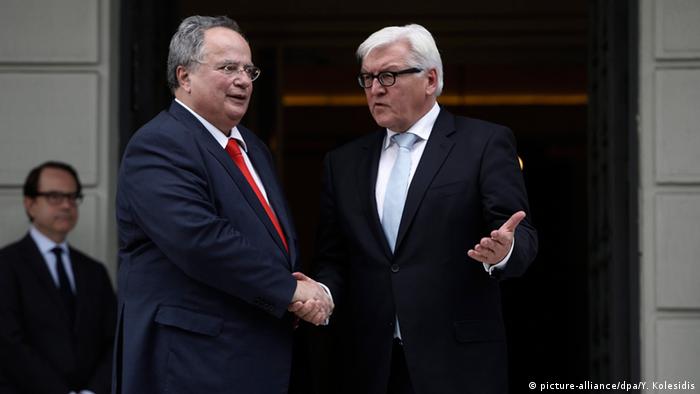 German Foreign Minister Frank-Walter Steinmeier was in Greece on Thursday to meet his counterpart Nikos Kotzias in Athens. The focus of the meeting was Europe's refugee crisis, which has disproportionately affected Greece as more and more refugees flee to its shores from camps in neighboring Turkey.

Despite rocky relations following Greece's debt crisis earlier in the summer, in which Germany was often pitted as the villain pressuring cash-strapped Athens to accept austerity, Steinmeier made it clear that Germany would support Greece as it struggles to handle the overwhelming amount of migrants arriving on its islands every day - more than another other European country.

Accommodating so many refugees has been particularly hard on Greece considering its lack of extra funds, and the cost-cutting measures called for by creditors in exchange for bailout cash, to appropriately handle an influx of so many people.

Despite the Dublin Regulation, which stipulates that asylum seekers must be processed in the EU country in which they first arrive, Steinmeier said that the present crisis called for a united European response.

Both Steinmeier and Kotzias placed part of the blame on Turkey for not doing enough to keep the 2 million refugees it is sheltering within its borders. The foreign ministers called on both Ankara as well as African countries, which are home to many of the fleeing refugees, to do more to stop thousands of people from taking the dangerous journey across the Mediterranean in ramshackle dinghies, a journey that often results in death.

On the 11th and 12th of November, EU countries will attend a special summit alongside several African countries in an attempt to create a solution to the crisis. Steinmeier also said on Thursday that it is necessary to evenly distribute refugees across Europe - a move hailed by nations like Germany, Greece, and Italy, but that has been the cause of some consternation in smaller countries like Hungary.

Despite efforts to improve coordination between Germany and Austria, chaos has continued at the countries' border. Thousands of refugees are continuing to flood across the borders. (29.10.2015)

The Slovenian town of Dobova has become a hub for refugees

The Slovenian town Dobova, where trains arrive from Croatia and leave for Austria, has become a hub on the migrant route. Tense relationships prevail in the migrant centers, Nemanja Rujević reports. (29.10.2015)