Arms sales to the Middle East jumped 84 percent from 2012-13, led by buying binges in Saudi Arabia and the UAE. But the United States continues to outpace the world in both exports and imports of arms - by a wide margin. 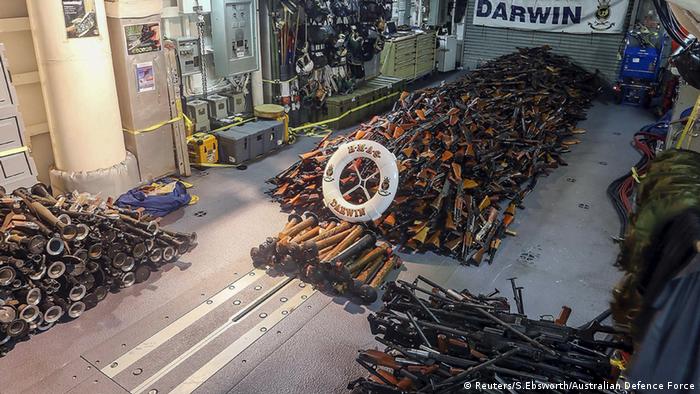 Global trade in small arms hit $6 billion (5.3 billion euros) in 2013, a jump of 17 percent over the previous year, according to a non-profit arms-tracking organization, which released its results at a UN conference in New York on Monday.

The report, which was produced by the Swiss-based Small Arms Survey, again found that the United States was, by far, both the largest exporter and importer of small arms and light weapons, exporting a record $1.1 billion worth of small arms.

Only two other countries - Italy and Germany - surpassed the $500 million mark in exports. But while the US had a mixed record on openness, Germany, Britain and the Netherlands were lauded for their transparency.

Transportable weapons that a single person can carry and operate alone are generally classified as small arms, although the precise definition is disputed.

Matt Shroeder, senior researcher at Small Arms Survey, noted many arms deals start out legitimate but that the weapons end up in the wrong hands. He also said that the size of trade isn't necessarily indicative of the harm done on the other end.

"Global small arms trades that are low in dollar value can be hugely destructive," he said.

This week's four-day conference in New York is under the auspices of the UN Office for Disarmament Affairs. The biennial gathering of representatives from around the globe aims to take stock of gains made in tracking international arms sales and the gaps that persist.

Experts agree that transparency is critical to minimizing deadly results of arms sales, according to Frank Slijper, an arms trade expert at PAX, a Dutch-based NGO.

"Certainly there's a value in that. It's not a final solution," Slijper said. "With proper transparency it's easier to see where weapons are coming from, and how they end up where they do."

The least transparent countries are Iran, North Korea, Saudi Arabia and the United Arab Emirates (UAE), each of which scored zero on the survey's index.

These results are especially disconcerting because at the same time that Riyadh and Abu Dhabi were hiding their arms deals, they were also becoming huge importers, according to the report.

The UAE became the world's fourth-most prolific importer of small arms, its purchases jumping nearly 150 percent in 2013 over the previous year - from $71 million to $168 million.

Saudi Arabia more than tripled its small arms imports during the same period, going from $54 million in 2012 to $168 million the following year.

Despite both countries' opaque arms dealing, the survey experts say they were able to track the surge in imports because the countries that sold the weapons were more transparent.

"It's a very worrying trend," said PAX's Slijper. "I you look at the date, two years after the Arab Spring, and turns out to be one of the least transparent countries in the world."

To what extent these arms have fed the war in Yemen is uncertain. By some accounts the Houthi insurgency began as far back as 2011, but it didn't gain international attention until 2014 when they overran Sanaa, the Yemeni capital, forcing President Abed Rabbo Mansour Hadi to flee to Saudi Arabia.

The subsequent Saudi-led air campaign against Houthi rebels may not have been a direct result of the small arms sent to Saudi Arabia and the UAE, but the execution of the campaign, in which thousands of civilians were killed, provoked widespread outrage. According to UN estimates, around half of at least 6,000 killed in Yemen were civilians.

Earlier this year, in late February, the European Parliament passed a resolution, calling for an EU wide embargo on arms sales to Saudi Arabia. Despite a vote of 359-212 in favor of an embargo, the EU's foreign affairs representative, Federica Mogherini, said the issue was beyond the purview of the EU, and that it was up to individual member states to act on their own.

Still, three weeks after the vote, under pressure on various fronts, Saudi Arabia announced it was suspending its air campaign in Yemen.

While Russia, China and Pakistan weren't at the bottom rung of the transparency ladder, their disclosure procedures were found seriously lacking, which is of particular concern since they are also thought to be among the world's major arms exporters.

The US, meanwhile, imported an astonishing $2.5 billion worth of arms, accounting for more than 40 percent of all global imports.

"The US has a very robust domestic arms market," Shroeder said. "US consumers have very diverse tastes."

For the first time in four years, the White House has approved a major arms sale to Taiwan. The arms deal comes during a period of historic reconciliation between China and Taiwan, with elections just around the corner. (17.12.2015)