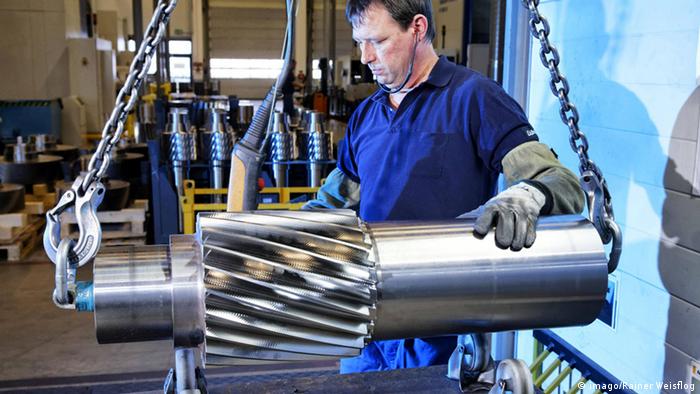 It took quite a while for the scale of the COVID-19 crisis to dawn on governments across Europe. Once measures were finally taken to protect public health with lockdowns and stringent social distancing regulations, other measures were immediately needed to mitigate the resulting damage to economies.

When Germany's ruling coalition took action on March 8, the decisions it made were significant, especially when it came to economic matters. Finance Minister Olaf Scholz said the country was wielding a "bazooka" in its fight to protect its economy from the virus.

One of the most eye-catching was the expansion of access to a government-subsidized scheme known as Kurzarbeit, which roughly translates as "short-time work."

Kurzarbeit is a familiar ally to those aware of previous Germany battles to keep the economy ticking over in a time of global crisis. According to Anke Hassel, a professor of public policy at the Hertie School in Berlin, the policy "is one of the reasons why Germany recovered so quickly after the 2008-9 financial crisis."

The scheme enables companies drastically affected in a downturn to either send their workers home or significantly reduce their hours without having to lay them off. Workers will still receive a significant chunk of their wages, with the state stepping in to cover much of the shortfall.

If a company avails of the scheme, workers are laid off temporarily but will still be paid. Their employers receive Kurzarbeitergeld or "short-term work money" from the Federal Employment Agency (BA), which is also responsible for paying unemployment benefits. The government will pay 60% of the salary workers received before the crisis, or 67% if they have children.

If and when the crisis abates, workers can then return to their full employment status without having had to be let go. The idea behind the scheme is primarily to stave off unemployment for firms and workers grappling with a crisis which is not their fault. It also means companies that have invested much in their workers' education and training do not lose valuable know-how which will be needed again in the future.

Has it worked before and what's different this time?

Germany has had some form of the scheme for several decades but it is best known for the role it played during the 2008-09 financial crisis, when it helped the German labor market avoid much of the damage inflicted elsewhere in Europe.

Germany's unemployment rate actually fell from 7.9% to 7% in the middle of that crisis, partly thanks to the scheme. At that time, around 1.5 million German workers had their wages subsidized by the mechanism, before returning to full-time work once the crisis had passed.

The scheme has remained in place in a much reduced form in the decade since then but has generally not been needed by companies, with German employment booming during that time.

On March 13 this year, the German Bundestag rushed through legislation expanding the scheme to try and meet the unique demands brought by the pandemic. One of the big changes was that access was made much easier for companies. Previously, a company could only avail if at least 30% of its workforce was affected by a lack of work. That figure has been drastically reduced to just 10% of a workforce.

There is also more money available than before, something that will be necessary given that many more workers are expected to receive money in 2020 than in the 2008-09 period.

The government expects up to 2.35 million people to receive Kurzarbeitergeld this time, costing the state at least €10 billion ($11.1 billion). The good news is that the Federal Employment Agency, in true, thrifty Teutonic fashion, has squirrelled away reserves of €26 billion.

Are companies already availing of it?

In a reflection of just how quickly the situation became an economic crisis, several companies are already tapping the scheme.

In figures released on Monday, Germany's ifo Institute for Economic Research said short-time work in German industry will skyrocket over the next quarter, with 25.6% of all companies expected to use it in the next three months.

In the first week since the scheme was relaunched, more than 76,000 companies applied. To put that figure in context, the weekly average last year was 600, and that was during a period when the China-US trade war and Brexit were already buffeting German industry.

Some big players have already started. Volkswagen, which as a car manufacturer is in the eye of the storm, plans to put 80,000 workers across Germany on short-time work, while Daimler will be reducing the hours for most of its 170,000 staff from early April. Even the likes of Deutsche Bank expect to use the scheme.

While Kurzarbeit has predominantly helped manufacturers in the past, the German government hopes that this time it will also come to the aid of the services sector, given that that area is being massively hit by the social distancing restrictions the pandemic has necessitated.

The scheme has been widely copied by governments around the world. It has been described as one of Germany's best ever exports, no mean feat in a country famed for the shiploads of stuff it sells abroad.

Yet it has its critics. As mentioned, the services sector has in the past not seen much benefit from it. Verdi, the labor union that represents that sector, says it isn't big enough to help low-paid workers in restaurants and similar jobs. The government hopes that will be different this time.

There is also the creeping fear that the COVID-19 pandemic may turn out to be a much more lethal economic foe than the global financial crisis ever was and that the scheme may not be sufficient to keep things ticking over in the longer term.

For example, if the current lockdown restrictions stay in place for several more months, as many public health experts have suggested may be necessary, many businesses will simply no longer have the revenues to survive in any form.