Senior Republicans urge Trump to back down on tariffs

Key figures in US President Donald Trump's own party have expressed their concern over his plan to introduce steel and aluminum import tariffs, and called for them to be scrapped. Trump said he would "stick to his guns." 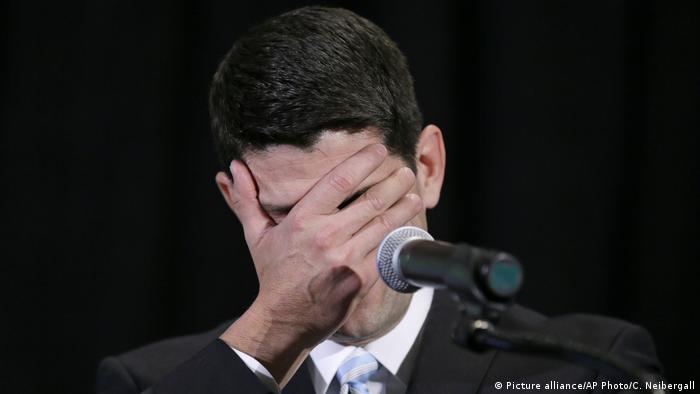 House of Representatives Speaker Paul Ryan on Monday became the most senior Republican to publicly distance himself from US President Donald Trump's plan to impose import tariffs on metals.

"We are extremely worried about the consequences of a trade war and are urging the White House to not advance the plan," AshLee Strong, Ryan's spokeswoman, said in a statement.

She said the tariffs plan threatened to jeopardize the impact of Trump's recently introduced $1.5 trillion (€1.25 trillion) tax cuts, which were backed by Ryan.

Asked about that public rebuke, White House press secretary Sarah Huckabee Sanders said, "Look, we have a great relationship with Speaker Ryan. We're going to continue to have one, but that doesn't mean we have to agree on everything."

Despite the increased pressure at home and abroad, Trump insisted he would "not back down." During a White House meeting with Israeli Prime Minister Benjamin Netanyahu, Trump added: "I don't think you're going to have a trade war."

Trump announced he would impose tariffs of 25 percent on steel and 10 percent on aluminum, a proposal supported by some union leaders and lawmakers from Rust Belt states.

The president triggered anxiety last week when he said a global trade would be "easy to win" and issued a threat in particular to German carmakers, one of which, BMW, runs a major plant in the US.

The European Union has said it would target American products such as bourbon, jeans and Harley Davidson motorbikes, which would directly affect Ryan's home state of Wisconsin.

Division in the White House

Trump has been opposed on the tariff plans by Defense Secretary James Mattis and White House economic adviser Gary Cohn, who have warned against penalizing US allies and undercutting the economic benefits of the president's tax overhaul.

Representative Kevin Brady, another top House Republican, called on Trump not to hit America's closest allies, while Republican leaders of the House Ways and Means Committee also circulated a letter opposing Trump's plan. GOP congressional leaders said they may seek to prevent the tariffs if the president moves forward.

Efforts by Trump and US trade negotiators to link the NAFTA trade pact talks to the duties have been heavily criticized by Ottawa and Mexico City. Canadian Prime Minister Justin Trudeau called Trump on Monday to tell him the tariffs would be an impediment to talks on updating NAFTA, a Canadian government official said.

Timing is of the essence

The planned tariffs have also upset business groups and stock markets with investors worried about the prospect of an escalating trade war derailing global economic growth, although some investors see the tariff threats as a US negotiating tactic and not a done deal.

Two dozen conservative groups, including the Club for Growth, FreedomWorks and the National Taxpayers Union, urged Trump to reconsider, writing in a letter that the tariffs would be "a tax on the middle class with everything from cars to baseball bats to even beer."

The White House has yet to announce the timing and extent of the planned tariffs. Trump was expected to finalize the planned tariffs later in the week, although some observers familiar with the process said it could occur next week.

Punitive tariffs! Trade war! Dissonant bells are ringing from both sides of the Atlantic. Despite the hullabaloo, Trump's tariffs will neither save the US steel industry nor sink that of Europe, says DW's Henrik Böhme. (02.03.2018)